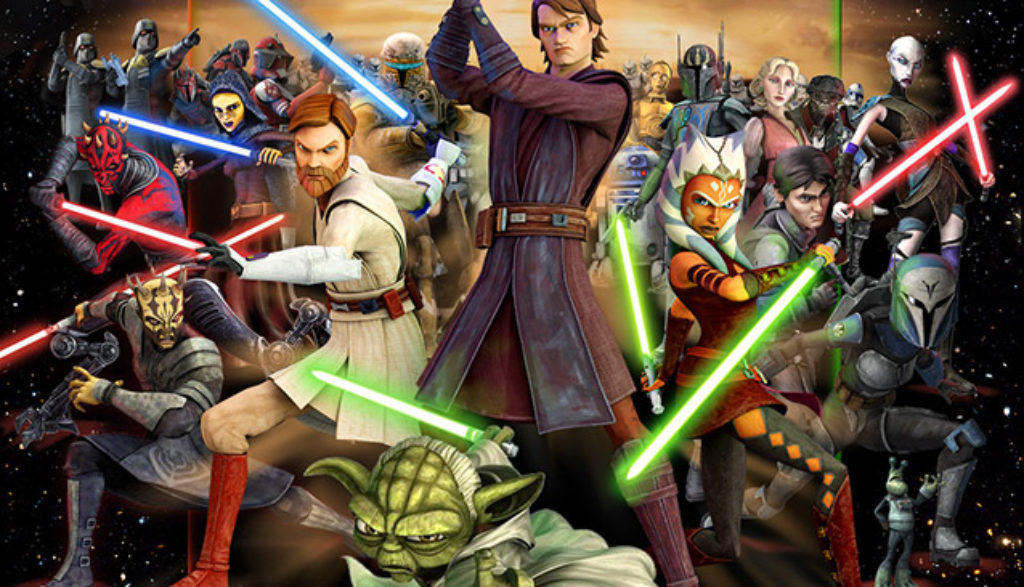 On May 25, 1977, George Lucas changed the cinematic world forever with a little movie that reconfigured our cultural understanding of the word blockbuster. Since then, Star Wars has been eclipsed at the domestic box office by only a handful of other movies … and I seriously doubt they’ll be making cartoons about  Avatar nearly 50 years from now.

Which brings us to Star Wars: The Clone Wars, a CGI-animated show birthed by Cartoon Network with an auspicious theatrical premiere in 2008. The series ended quite suddenly when LucasFilm was bought out by Disney back in 2012. Because the series was left on a bit of a cliffhanger, Netflix released a sixth “final” season in 2014 consisting of 13 episodes which had been completed but not aired. But now, thanks to Disney+, fans are being rewarded with a true final season that will wrap up the storylines of all the heroes and villains.

Star Wars cognoscenti, of course, won’t need a history lesson to explain where the titular Clone Wars fit into the franchise’s timeline. For everyone else, a bit of backstory is in order:

The series chronicles the heroic exploits of Anakin Skywalker, Obi-Wan Kenobi and (for much of its run) feisty Padawan Ahsoka Tano during the three-year span between the live-action films  Attack of the Clones and Revenge of the Sith. The Jedi warriors fight on behalf of the Galactic Republic against the rogue droid armies of the Confederacy of Independent Systems—more commonly known as the Separatists—led by Jedi-gone-bad Count Dooku and the cyborg menace General Grievous. Together, their adventures span the galaxy, from Felucia to Coruscant, from Christophsis to Mandalore. (There are also a few, often lighter episodes that don’t feature the future Darth Vader.)

The script blends equal parts intrigue and battle as the Jedi and their allies seek to outflank cunning enemies—be it in space, on the ground or anywhere in between. Missions include getting supplies to a blockaded ally, helping indigenous peoples ward off interlopers or trying to defuse an assassination plot, among many other things.

A Yoda-like object lesson flashes on the screen for emphasis at the outset of each episode. “Searching for the truth is easy. Accepting the truth is hard,” reads one. “In war, truth is the first casualty,” reads another. And occasional deeper subtexts ask questions about the nature of good and evil or lightly poke situational ethics. So while some episodes are pretty light or even silly, others can be grim, dark and—in its own cartoon world—pretty violent. Clones and Jedi alike are killed on the field of battle. And as the series has drawn to a close, it’s hard to forget that most of the Jedi we see are hurrying toward their own inevitable doom.

As for the mystical energy field known as the Force, my words from The Clone Wars movie review are still relevant when it comes to the series as a whole: ” Clone Wars assumes that viewers are already fully in the know regarding the pseudo-spiritual energy field that the Jedi harness for good and the Sith (dark Jedi) for ill. There are no long, expository conversations about the nature of the Force like the ones that pop up occasionally throughout the live-action films. Mostly, we see how it equips Anakin, Obi-Wan and Ahsoka … with superhuman agility in combat.”

The twist is that many young (some very young) fans of The Clone Wars animated series may have never seen the movies that define such spiritual subtleties. So beyond the cartoon violence, that’s a fact parents would do well to grapple with before granting carte blanche permission to travel to a certain galaxy far, far away.

When Captain Rex of the clone army suspects that one of his presumed dead clone brothers may still be alive, he embarks on a mission with a “Bad Batch” of clones to find out the truth.

The clones go on a “suicide mission.” Laser fire is exchanged between ships, clones and droids. A ship crash lands, injuring one clone quite badly. A clone gives the gritty details of how he killed a creature called a “Yalbec.” Someone says the Yalbecs were trying to mate with the clones. We see a spider-like creature with multiple eyes and pincers.

A clone named Tup seems to lose it during a critical battle with the Separatists, assassinating a Jedi master during the skirmish with a shot to the head. (We see the dead Jedi, but not the actual death blow.) He mumbles, over and over, “Good soldiers follow orders” and tries to attack another Jedi, mystifying Anakin and Tup’s clone colleagues. They speculate that Tup fell victim to some form of biological warfare but decide the only way to know for sure is to send a still-delirious Tup back to the planet Kamino to be examined.

Getting him there proves difficult. The Separatists launch an attack on the Kamino-bound craft and kill everyone aboard. One victim gets yanked into the vacuum of space. Others are shot. When Anakin investigates the wreckage, a dead clone floats in space, his wide, vacant eyes staring blankly into the darkness.

Droids get “killed,” too. One is stabbed through the chest from behind. Another has an arm sliced away from the torso. Others have heads blown off. Clones are shot and killed elsewhere in shootouts reminiscent of the movies.

“A Sunny Day in the Void”

Under the command of the diminutive Colonel Meebur Gascon, a ship bearing five droids (including R2-D2) is bashed and battered by a shower of comets. It crashes on a virtually featureless planet, forcing its occupants to figure out a way home.

This episode is light and nearly combat free, but the themes are deeper than you might expect. The colonel and the computerized pilot, WAC-47, argue about the difference between the his “training” and WAC’s “programming,” with the alien’s organic abilities often falling short of his more reliable computerized underlings. When the colonel implores to the sky above to “Show me a sign, deliver us hope,” WAC admits to the other units, “I do not know who he is talking to. Maybe whoever programmed him.”

The colonel eventually sinks into philosophical self-pity. “Life is a void,” he says. “We search and search for answers, but there are none. Hope is just an illusion. Death is the only certainty.” WAC bucks him up, saying, “Giving up is not in my programming. I’m surprised that it’s in yours, Colonel.” (The colonel does cheer up, and they’re eventually saved by ostrich-like creatures, following neither God nor computer programming, but the animals’ instincts.)

A couple of jokes are made about suicide. The crew finds a skeleton of both a creature and a robot. The colonel talks about rupturing his gizzard. Droids are called “stupid.”

After getting shot down by Separatist forces, Obi-Wan, Anakin and Ahsoka find themselves stranded on the planet Felucia. Seeking a ride off the world, they stumble into a conflict between peace-loving farmers and a group of pirates who demand a share of their crops. The farmers have already contracted with bounty hunters for protection, but the Jedi’s aid enables them to stand up to the pirates. This episode’s stated lesson: “Courage makes heroes, but trust builds friendship.” The underlying message here is that the best way to deal with bullies is to stand up to them.

Most of the battle scenes involve living, breathing combatants on both sides (as opposed to droids). One of the bounty hunters chokes a pirate to death and drops his lifeless body on the ground. Another pirate takes a spear to the chest. Laser- and cannon-fire blow up buildings and hovering speeders, resulting in further casualties on both sides.

Anakin and Obi-Wan have been tasked with getting much-needed supplies to Senator Bail Organa on the besieged world of Christophsis. There’s only one problem: It’s being pummeled and blockaded by an impressive orbiting armada commanded by the spider-like General Trench.

Combat in this episode primarily consists of ships trading fire in space, with many resulting explosions and presumed casualties. A couple of brief scenes show General Trench’s bombers devastating a city. (Mostly we see explosions there, too).

As is often the case in their relationship, Anakin has unilaterally decided that Obi-Wan’s orders are not the best way to proceed. When he’s labeled “reckless,” Anakin responds, “Reckless … gets results.” Likewise, When Obi-Wan says, “Might I remind you that this is not your mission,” Anakin quips sarcastically, “You might.”