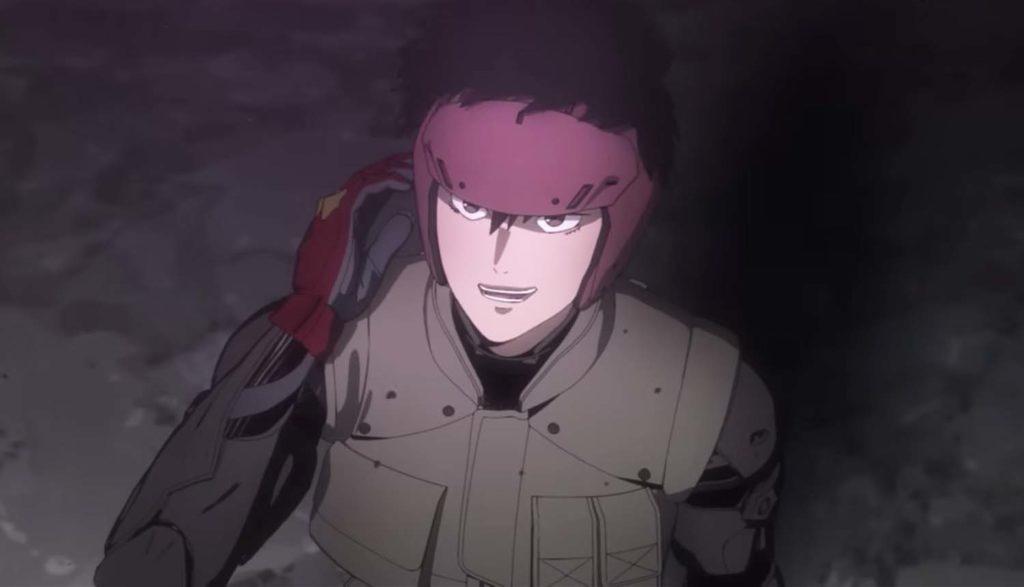 “You are a bleeding-heart softy, but that is actually one of the things I like about you,” says Jean Jacquemond to Yu Ominae as he carries him bleeding from a fight. Indeed, bleeding hearts, heads, and all sorts of things are major elements of the anime series Spriggan.

Yu Ominae is a fearless teen boy who fights as a member of the Spriggans, elite agents who protect the ancient relics of an advanced civilization as part of the ARCAM Corporation. These relics could bring about the destruction of humanity in the wrong hands. So it’s up to Yu, Jean and their fellow ARMCAM fighters to keep that from happening.

Yu is a powerful fighter with incredible martial art skills and a suit that makes him impossibly resilent and strong. Jean is ridiculously fast and good with a gun, although Yu does his fair share of shooting too. These characters face enemies with their own enhanced suits, mechanical bodies and godlike abilities (or demonic ones, depending on who you ask).

Yu does all that he can to protect the people he cares about by defending them and the artifacts, even when he has to kill countless others. He even tries to spare his enemies from death when he can, unlike Jean, who prefers to create fear in his enemies through his ruthlessness. Yu also wants live his life as a high school boy, and these two worlds are jarringly different.

Couresty of the studio that brought us the screen adaptation of Jojo’s Bizarre Adventure comes this distinctly adult iteration of a classic manga series. Fans of the genre will like encounter the strong depictions of multiple ethnicities, a fast-paced plot and frenetic action sequences.

Despite the show’s sci-fi oriented world, we get frequent allusions to biblical stories and artifiacts. Still, this series’ worldview is hardly a Judeo-Christian one. Supernatural powers cause characters to consider each other gods at various points. America, meanwhile, is a consistent antagonist. Finally, Spriggan earns its M-rating for foul language at just about every opportunity, and the violence here is similarly intense.

Spriggan isn’t the most graphic M-rated anime show you can find. But despite its animated narrative, neither is it for kids.

Rie, a genius professor, comes to help ARMCAM decipher ruins underneath a volcano. American and Russian agents attept to kidnap her for their own use, so Yu Ominae is sent to protect Rie and help her seal off the Flame Serpentt, which threatens to destroy the Earth.

A man claims that God is bringing judgement through him similar to the events of Sodom and Gomorrah. Countless automatic weapons are fired in attempts to kill Yu and capture Rie, while the heros and villans yell obscenities at each other. Characters take visible damage, finishing fights covered in blood and with lumps on their face. People get thown out of windows and ripped apart with bullets, “wind strikes,” etc.

Yu says that Americans and Russians are more concerned with supremacy than advancement. The most frequent  swear words used are d— and b–tard, which are constantly exchanged during skirmishes. The word h—, different forms of the word a–, and b–ch are also included in dialogue.

Deep in the Turkish mountains, Noah’s ark is uncovered alongside a message plate from the ancient civilization that the Spriggans are sworn to protect from exposure. Yu and Jean go to the facility to protect the relic from the nefarious plans of the an American kid cybernetically advanced to take the power of the ark.

The ark has the power to end humanity and to create a new planet for the people to live on, the show tells us. The relic is similataneously capable of grace and destruction, much like the Spriggans themselves.

One of Yu’s friends working at the facility is said to be imagining his upcoming honeymoon. A few techonologically enhanced men from America viciously attack ARMCAM agents, killing and maiming many.

An American agent rips others apart with metal cables indiscriminately. Characters are shot bloodily. Jean turns into a large werewolf type creature called a lycanthrope, which apparently happens to him at the sight of his own blood.

The Americans say that the ark is supposedly going to be an answer to rampant environmental destruction. Yu says to an American child attempting to justify his violent behavior, “God is just an excuse people use to run away from their sins.”

Profanity here is similar to the last episode, with uses of d–n, b–tard, a–hole and h—.