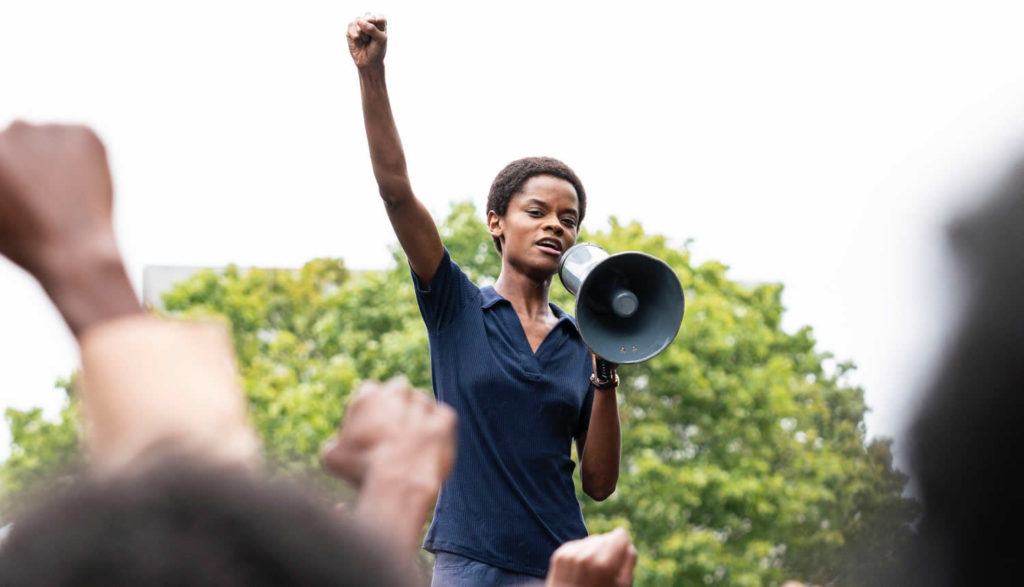 Small Axe is an anthology series created by Steve McQueen (director of 12 Years a Slave) depicting the real-life experiences of London’s West Indian community between 1968 and 1982.

The series, which premiered on Amazon Prime on November 20, is actually a collection of five films, each telling its own unique story. One film (or episode) is released each week, concluding on Dec. 18.

The first film, Mangrove, recounts the trial of the Mangrove Nine. After the Mangrove restaurant, a community meeting house of sorts owned by Frank Crichlow, was raided nine times without provocation, Crichlow and members of the Black Panther movement organized a peaceful demonstration to voice their discontent with the police force’s racial prejudice. The protest turned into a riot (largely perpetrated by members of the police, it was concluded), resulting in Crichlow and eight others being arrested on the charges of riot and affray. Their trial, which took place in the Old Bailey (usually reserved for trials covering more serious offenses, such as murder) became the first judicial acknowledgment of behavior motivated by racial hatred within the Metropolitan Police.

Lovers Rock (the second film), comparably, has much lighter subject matter. A group of friends prepares for a house party later that evening. People fall in love while dancing and singing along to “lovers’ rock,” a niche genre of music that  the West Indian community embraced. The music, and the film itself, inspire hope, love and passion, almost prepping characters (and audiences) for the much heavier tone that is expected to come in the series’ last three films (released after this review was written).

The third film, called Red, White and Blue, follows the story of Leroy Logan (played by Star Wars’ John Boyega), whose father was wrongfully assaulted by a policeman, which motivated him to join the Metropolitan Police and battle racism from within. Along the way, he faces opposition from both the mostly white (and often still racist) police force, from his father (who never forgave the officers for their brutality towards him), and even from the black community, many of whom consider him a traitor for helping the police despite his intentions.

Alex Wheatle (the fourth film) tells true story of how Alex Wheatle became an award-winning writer. After spending his childhood getting bounced around Britain’s foster care system, Wheatle found it difficult to find his place among the West Indian community due to his proper English schoolboy accent. He adopted the Rasta dialect and tried to prove his loyalties by taking on unsavory (and sometimes illegal) tasks given to him by elders of the community. And he was eventually arrested after getting involved in the 1981 Brixton riot. However, while in prison, he was inspired by his cellmate to take his education seriously and learn about the past so that he could, in turn, shape and mold his future.

And finally, Education focuses on the story of 12-year-old Kingsley Smith—a young boy who almost got lost in England’s educational system. After being transferred to a school for those with “special needs” for being disruptive in class, a group of West Indian women came to Kingsley’s rescue to make sure that he and other black children would receive the education they deserved.

It’s Not All Black and White

The title of Small Axe refers to the proverb: “If you are the big tree, we are the small axe ready to cut you down,” popularized by Bob Marley in his song “Small Axe.” It suggests that even though England’s educational and law enforcement systems (the “big tree”) were rigged against people of color, the people of London’s West Indian community (the “small axe”) were prepared to work together to correct those systems.

“Singly and taken together, the films of Small Axe create a potent portrait of individuals, as well as an entire community, that have been virtually erased from the cinematic record, along with the suffering they endured from a cruel and hostile system,” wrote Ann Hornady for The Washington Post. “By bringing these stories to light with such clarity, feeling and immersive sensory detail, McQueen performs a powerful act of restorative justice: His is a cinema not just of intoxicating beauty but of profound healing.”

Of course, for all of Small Axe’s positive messages, there are some negative aspects to be aware of.

The series is rated TV-MA for a reason. Language is a serious issue, with racial slurs and profanities up to and including the f-word. The violence exhibited against black people is appalling (and potentially triggering to anyone who has been a victim of racial prejudice). There is also a scene where a woman is nearly raped before being rescued by her friend. And even though there’s no nudity, things can get quite intimate between couples, some of whom are same-sex.

Something else to be aware of is the emotional disturbance one might experience by watching. Even when violence isn’t being directly depicted on screen, you can feel the anger, hatred and fear. When the Mangrove Nine stand on trial, it’s easy to get caught up in the emotions of the courtroom. And given the cultural and racial tensions in the United States, especially regarding the debate over police brutality, this could be traumatizing for some viewers. That being said, McQueen meticulously researched these films, even using transcripts from the actual trial portrayed in “Mangrove”. Small Axe, excepting the fictional “Lover’s Rock” episode, seeks to depict real-world events as realistically as possible, showcasing the history, art and culture of London’s West Indian community. And if you’re prepared to handle the content concerns, it can be a great educational tool.

After a planned peaceful protest turns violent, Frank Crichlow and other members of London’s Black Panther movement go to trial on false charges of riot and affray.

Racial tensions hang heavy throughout the film as we hear racial slurs and watch as police arrest multiple people on made-up charges. Things turn violent multiple times. We see police officers chase down, manhandle and beat black people with batons. Some people resist but are unable to fend off their attackers.

We see a couple kiss and embrace through a mirror’s reflection (and it appears that the woman is not wearing a top). Several couples dance and embrace. People are accused of prostitution.

Frank and his comrades remind each other to trust God. People in court take oaths using a Bible. Someone says, “God save the Queen.” A woman speaks to a group of men, some of whom wear Sikh turbans. Several people call cops “devils.”

People drink, smoke and gamble throughout the film. A few people also smoke marijuana and others are accused of drug use. Police officers lie under oath and frame people for crimes. We hear multiples uses of the f-word and s-word, as well as “b–tard,” “d–n” and “h—.” We also hear curses that are unique to British and Trinidadian culture. God’s name is also misused a couple of times.