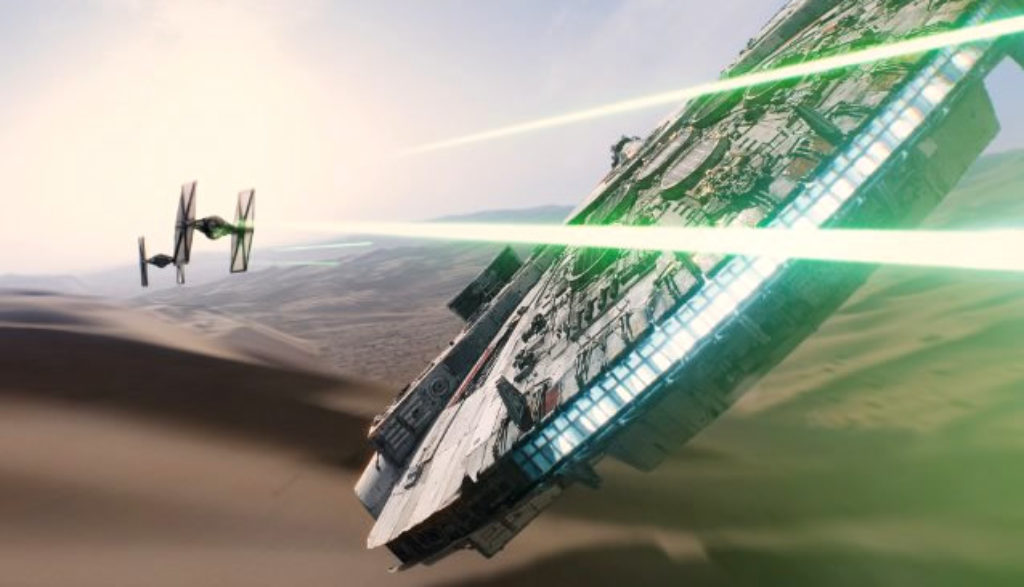 The Emperor may be dead. The Empire gone. But the Dark Side is still in fine feather.

Some 30 years after Episode VI, it’s using the form of the First Order, an Empire wannabe with a darker, vaguely more cultish sheen. While not yet the galactic power that Emperor Palpatine’s old outfit was, this regime has dreams, man. Instead of constructing all those flimsy Death Stars, it’s decided to retrofit a whole planet into the most fearsome of weapons. It can still build and fly TIE fighters and massive destroyers as well as anyone, of course. And while it doesn’t have Darth Vader to choke wayward generals anymore, it does have a guy named Kylo Ren—a young, passionate Sith acolyte who thinks Vader walked on water. (Or boiled it, or whatever the Dark Side thinks is the most appropriate use for water.)

But there are plenty of folks who’d rather not see the First Order sweep through the galaxy like the Empire’s second coming. A resurgent Republic is none too pleased with the Order’s incursions. The Resistance is actively pushing back. And, indeed, the Order is terrified that Luke Skywalker—who disappeared ages ago—could return and teach a new collection of Jedi the fine art of Forceful opposition.

On Jakku, a backwater planet now only valued as an orbiting salvage yard, both the Resistance and the Order hear rumors of a map that might lead to Luke. Dashing Resistance pilot Poe Dameron gets to that treasure first, but just barely. Ren and his assorted Stormtroopers are hard on his heels, and Poe only has time to pack the info away in the bowels of his trusty droid, BB-8, before he’s captured. The droid rolls into the desert with his precious cargo, hoping he might come upon a little help before Ren finds him and has him scrapped for parts.

Meanwhile, Ren, showing just how much he aspires to be like Darth, decides to slaughter everyone in the village. Why? Well, the Dark Side is just like that.

But one helmeted Stormtrooper, aiming his blaster at the innocent men and women in front of him, can’t quite seem to pull the trigger.

That Stormtrooper—Finn, he comes to be called—takes a step away from his dark masters in that moment, and it’s a step that proves irreversible. One minute, he’s refusing to kill innocent civilians. The next he’s risking his neck for near-strangers and a cause he’s been literally raised to war against. Even though his thoughts sometimes stray to self-preservation (which makes him a bit more like you and me), he proves time and again that he’s no coward. And his bravery helps save, perhaps, a good chunk of the galaxy.

He’s not alone, of course. BB-8 eventually finds himself in the company of a Jakku scavenger named Rey. She subsists by selling the semi-usable parts she finds on crashed space cruisers. Pretty much everyone on Jakku lives hand to mouth the very same way, which makes an actual running contraption like BB-8 incredibly valuable. But despite the pressure to sell the thing for parts, she refuses, even beating away folks who would take the droid by force. Once she and Finn join forces (because you knew they would), she shows herself to be at least as brave and resourceful as he is. Who knows. This young lady might turn out to be the sort of savior the Resistance could really use.

We also see many familiar faces performing at their self-sacrificial best. Han and Chewbacca work to help the Resistance at every turn of the galactic arm. Leia’s called General, not Princess these days, and she’s back to planning strategies and inspiring troops when she could be, one would think, sitting somewhere safe eating Nabooian bonbons.

Two more things: Family has always been an improbably big part of the Star Wars universe, and we again see the stubborn love of family powerfully at work here. And the series mainstay of “It’s never too late to do better” also reemerges. Kylo Ren is Vader’s evil heir apparent. And he’d like nothing more than to follow in the Sith’s foul footsteps. But even he, perhaps, is not beyond salvation. (More on that later.)

The Force remains a force in the Star Wars universe, and it seems to have, at least temporarily, shoved aside those odd midi-chlorians introduced in George Lucas’ prequels. It becomes an explicitly spiritual presence here—something that weaves through every living thing in the universe. Even Han—such a skeptic in the original film—is a believer. “The Force, Jedi, all of it,” he tells Rey and Finn. “It’s all true.”

As such, Rey sees a mystical vision, blending her past, present and possible future into one frightening ball. Luke is rumored to have gone in search of the mythical first Jedi temple. There’s talk of the Light guiding various characters. And Ren is seen asking, as if of a relic, Darth Vader’s heat-warped mask for guidance. “Forgive me,” he tells the helmet. “I feel it again. The call of the Light.”

It’s an interesting moment, given Ren’s commitment to the darkness. And I’ll also note—without excusing or excising the issue in any way—that as spiritually squishy as the Force may be, the concept does allow the Star Wars movies to embrace a really important truth: There’s good and evil in this universe, and it’s defined by something beyond ourselves.

Han and Leia reunite, hugging and holding each other affectionately. We learn that they had a child together, but when a tragedy struck, they broke apart. While not sexual in any way, there’s an interesting interchange between Finn and Rey as they’re escaping from a First Order attack on Jakku: Finn grabs Rey’s hand to run—a well-meaning gesture that Rey doesn’t much cotton to. And so she later grabs his wrist and leads him. She kisses him on the forehead.

Lots of people die, Star Wars-style, from laser blasts. (Which means there’s little to no blood.) Stormtroopers go flying from explosions. X-wings and TIE fighters are blown to bits and sometimes crash into the planets below. Etcetera. To put it another way, the body count here is outrageously high while the gore level registers at near “antiseptic.”

A couple of exceptions to note: When Ren arrives on Jakku, Finn sees one of his fellow Stormtroopers die, and the expiring soldier leaves bloody finger streaks across Finn’s helmet. Poe, shackled to an upright torture table, has a bit of blood trickling from his scalp.

There are fistfights and other such altercations. People are thrown into trees (knocking them senseless) and fall from some pretty dramatic heights. One character gets smacked around a bit and shocked. A tentacled creature gets slammed in a door, which severs various appendages. (We watch them flop around on their own.) That creature and its mates roll through a ship trying to eat anything that moves. (They sometimes succeed, just out of the frame). Lightsabers are the cause of several (instantly cauterized) injuries, and a couple of people die from a saber to the gut. (It juts out the other side.) There’s talk of using poison gas to neutralize enemies.

“Something far worse has happened to you,” San Tekka says. And then he offers a thread of hope to the now-masked villain. “The First Order came from the Dark Side,” he says. “You did not.”

I like that. It illustrates the biblical point that while we all do evil deeds, we are not irredeemably evil. As dark as our souls are, there’s the hope of light that’s freely given to each of us—the possibility of redemption.

Of course, we have to embrace that hope for it to come about. We have to accept that possibility. Just as Rey and Finn choose to accept that there’s another way to do things—a way practically inconceivable to those of the First Order—we have our own choice to make.

Star Wars is many things to many people, and most of them are right about it. To some it’s all hinky spirituality. To others, it’s laser fights and space freighters. Still others think of it as a love story or a Western or a galactic war zone. But it can also be a starting point to talk about courage, friendship, faith and family.

J.J. Abrams’ take on George Lucas’ monumental cultural myth returns to the spirit of the original trilogy. It’s PG-13, as was Episode III: Revenge of the Sith, but despite the literally astronomical body count here, it’s not as bleak as that 2005 feature.

It’s not just the Force awakening in Episode VII. It’s the franchise’s charm. And maybe its life lessons, too.