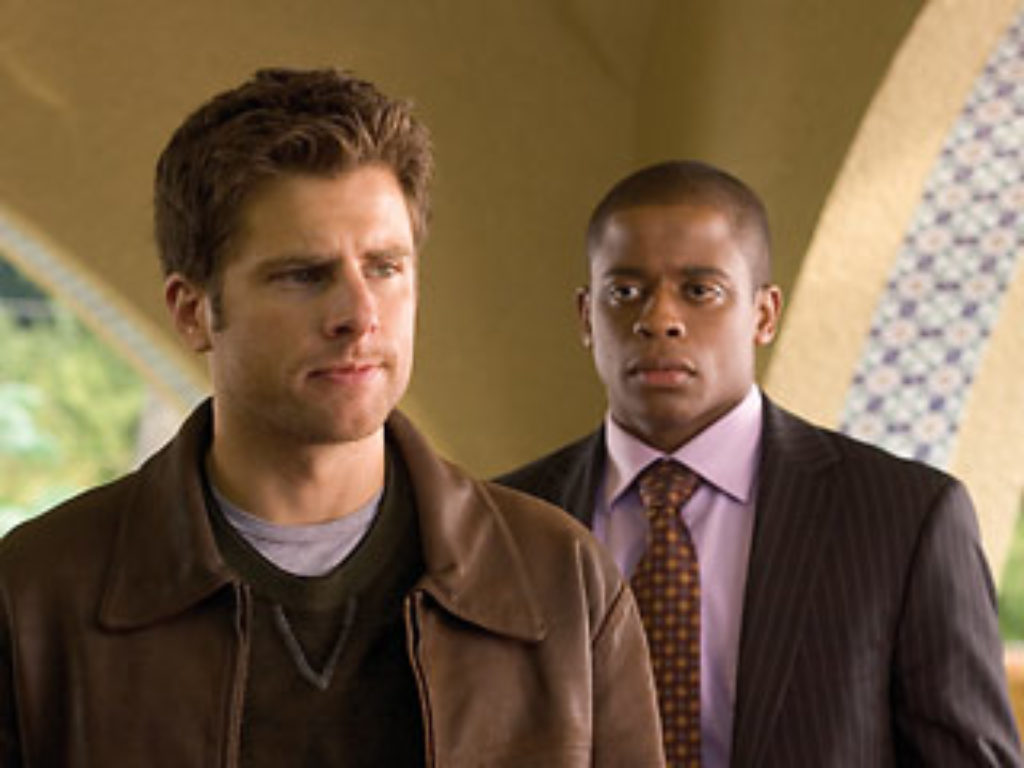 Who knew that “fake psychic” could be such a secure job?

Shawn Spencer has been a counterfeit clairvoyant longer than I’ve been a television critic (and there are days when that feels like a mighty long time). On USA’s Psych, he’s been contacting the great pseudo-spiritual beyond for cash since the last Bush administration, managing to weather the Great Recession and any number of California-based aftershocks while impressing and exasperating the Santa Barbara Police Department on a weekly basis. During his tenure, he and reluctant best friend/business partner/chauffeur/super-sniffer Gus Guster have solved hundreds of crimes, namedropped thousands of pop culture touchstones and hidden who knows how many pineapples in the outer frames of viewers’ television sets.

Yes, Psych has been around the block a time or two. And while updating this review, I’ve developed a strong premonition that it’s not going to stop circling anytime soon.

Shawn’s psychic abilities (like those of another long-employed fake psychic, CBS’ The Mentalist) have nothing to do with sensing auras or playing with Ouija boards. Shawn’s just really, really good at observing details—a trait drilled into him by his demanding father from the time he was a lad. And while he and his pop haven’t always had the best of relationships—hugs between the two might classify as a truly paranormal experience—those lessons have paid big dividends. Masquerading as a psychic (because nobody wanted to hire him for being really, really observant), Shawn now has a semi-regular gig with the Santa Barbara police, where he and Gus work with skeptical curmudgeon Carlton Lassiter and his tough-but-pretty partner (and Shawn’s sometime girlfriend) Juliet O’Hara.

We’re never quite sure if police chief Karen Vick buys into Shawn’s bizarre abilities. But she keeps hiring him. Why? For one thing, he has an unparalleled record for solving crimes. For another, things might get boring at the ol’ police station without him.

Psych is Murder She Wrote for Gen Xers, a mystery sendup loaded with screwball comedy, deadpan delivery and obscure ’80s references. It began as a same-night companion for USA’s beloved Monk—a manic, sugar-addled rejoinder to Adrian Monk’s gentle, neurotic zaniness. From the outset, the two made for a good primetime match. Both were funny. Both were clever. And both were surprisingly clean—steering clear(er) of the sex and gore that’s become a staple of crime shows elsewhere on the dial. (I’m looking at you, Criminal Minds).

Monk’s gone now, of course, and over time Psych has coarsened. It rarely gets steamy, but sexual innuendo more often than not accompanies each week’s mystery, and Shawn’s and Gus’ respective love lives are common plot fodder. The violence and gore we see (more of now) is almost always played for laughs, but that doesn’t mean you won’t see folks get stabbed or shot or, in the case of a recent episode, caught in a bear trap. Language is an increasing issue too.

Even post-Monk, though, sidle Psych up next to your standard CBS procedural, and it feels positively gracious. Compare it to your standard ABC sitcom, and it feels surprisingly innocent. And stack it against all the other one-hour crime-themed screwball comedies out there, and you’ll see that it’s truly one of a kind. It’s witty, fun and self-aware.

It’s hard to give a hearty thumbs-up to very much on television these days. Artistically, it’s arguably never been better. In terms of content, it’s never been worse. It’s a wild, experimental, very un-family-friendly time on the small screen. Psych, when viewed against that backdrop, feels better than most—a show that neither insults your intelligence nor assaults your senses nor completely shreds your sensitivities. And if we were grading on a curve, we’d pat Psych on the back, give it a fresh pineapple and wish it well.

But you can’t really grade this stuff on a curve. And so the best we can do is wish that it gets better.

In homage to film director Guy Ritchie’s bloody caper Lock, Stock and Two Smoking Barrels, Shawn and Gus head to London at the request of Interpol to infiltrate a nefarious gang/attend a Harry Potter convention. To their surprise, their Interpol boss is a chap they’ve come to know as an international jewel thief.

Gus tries to bring a lot of Harry Potter-themed knickknacks aboard a plane (including wand and broom) and makes a mad leap to reclaim his “potions.” Shawn quips that he’s a product of divine intervention. A picture of Queen Elizabeth is tagged with a lewd “QILF” label. To illicit rude giggles from American viewers, the guys frequently reference “spotted dicks” (a popular pudding in England), and when Gus talks about a Cockney accent, Shawn says, “That’s disgusting.” When asked whether he’s read a pertinent file, Shawn says only the parts that mention “boobs.” Shawn frequently tells Gus to “suck it.”

A massive fistfight leaves a man knocked out cold. A baddie pushes one guy out of a moving van and shoots another (out of the frame). Shawn and Gus find a dead royal in his house. They feel they might’ve prevented his immediate death, but Gus rationalizes that the royal was “really old and evilish.” We hear dire threats. Characters drink. They say “d‑‑n,” “h‑‑‑,” “a‑‑” and “b‑‑tard” once or twice each. “Bloody” pops out a whole bunch of times, and a pub is named “Bloody Bucket.” God’s name is misused.

Using a “found footage” conceit, Psych dives into the forest to search for Bigfoot. The beastie’s never found, but three dead bodies are. Carlton’s foot also discovers, quite painfully, a bear trap. (He passes out from loss of blood; we see the trap on his leg and some bloody bandages.)

There’s some confusion about cannibalism as the plot thickens, along with a few gags to go along with it. Several people get shot (one with a crossbow), and some are killed. A man gets axed in the back (with the weapon dangling and shimmying comically).

A randy co-ed’s crude double entendres, sexual adventurousness and lewd come-ons become a running joke. She says she believes in free love, pulls a guy aside to have sex with and makes a pass at Gus. She rolls her eyes at the very idea of monogamy. Shawn finds fur-covered handcuffs in her backpack. One short sequence revolves around urinating in the woods … possibly on someone else. Characters say “b‑‑ch,” “d‑‑n” and “h‑‑‑” five or six times each, “a‑‑” once or twice. God’s name is misused at least a dozen times.