The Proud Family: Louder and Prouder 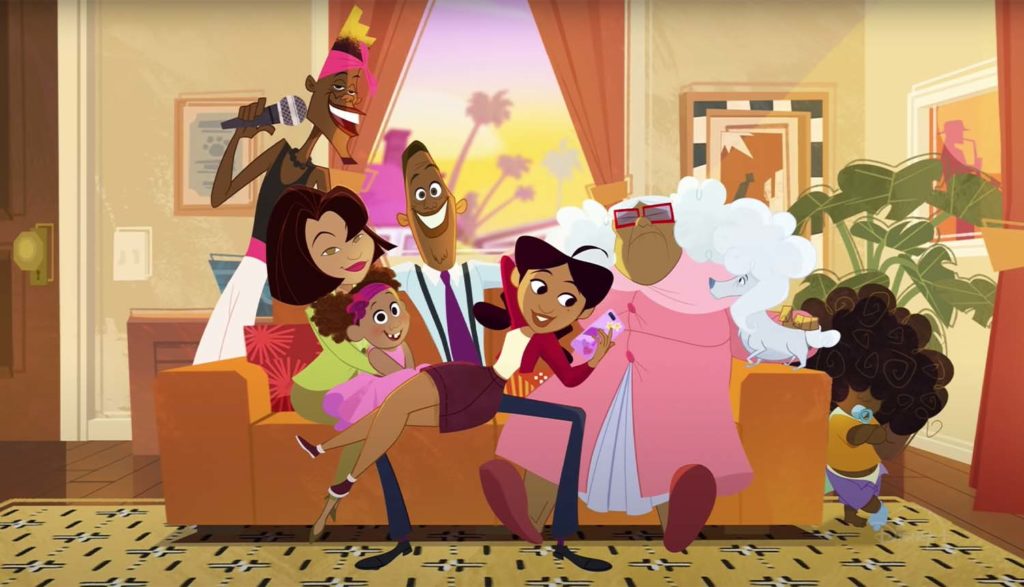 Penny Proud seems like a smart girl. You’d not expect her to still be in middle school after almost two decades.

But sure enough, the Proud family’s oldest daughter is still 14, still attending Willy T. Ribbs Middle School, and still navigating life’s challenges with some help from her family and friends.

But this new take on The Proud Family, courtesy Disney+, does receive a pretty significant makeover. And its new title add-on—Louder and Prouder—is well chosen.

While Penny’s no older than she was in The Proud Family (which ran on the Disney Channel between 2001 and 2005), the 14-year-old has a few more curves this time around. Her friends have undergone some big changes, too. Zoey’s gone through a significant growth spurt and now towers over her friends like a lamppost. Penny’s frienemy, LaCienega, is still the prettiest girl in school—but these days, it takes work.

Thank goodness, then, for Michael, the son of the school coach. In the original Proud Family, Michael was generically effeminate (much to the discomfort of his pops, who made the boy call him “Coach” instead of “Dad.”) But these days, Michael’s out of the closet as an uber-fashionable non-conforming member of the LGBT community who dyes his bouncy curls pink and crushes on boys. Naturally, he’s a makeup and makeover dynamo: This is the sort of series that does its best to debunk stereotypes … unless it just doesn’t want to.

Oh, and some new kids have enrolled in Penny’s school now, too: Maya Leibowitz-Jenkins is aggressively woke. Her brother, KG, is aggressively into games. And they’re being raised in a two-dad household.

Meanwhile, Penny’s family itself remains just as quirkily traditional as ever. Mother Trudy Proud is savvy, smart and wise. Oscar can exasperate Penny, but he’s a loving dad. Her grandmother, Suga Mama, still dotes on her poodle pooch, Puff; still has little use for her son, Oscar; and still has moments of sharp wisdom. Penny’s family members all encourage her to study hard and play fair. And together, they all deal with the joys and perils of Penny growing up.

“But not too much,” Trudy counters. “Remember how we raised you.”

That’s a nice illustration of the inherent balance that we all must find, especially as we plow through the perils of adolescence. There’s nothing wrong with enjoying life … but not everything that life offers should be enjoyed.

The show itself doles out plenty of positive lessons outside the home, too. Penny isn’t perfect. But in each episode, she and others learn about what it means to be a good friend and a conscientious person. She also learns about coping with the perils that most of us deal with—finding that nice middle balance throughout it all.

But if you’ve read this far, you know that for all the nice, traditional lessons Louder and Prouder can dole out, the show steps out on a rainbow-colored stage and dances on it.

“A lot has changed in 20 years, that’s for sure,” said Ralph Farquhar, the show’s producer, as quoted by Deadline Hollywood. “Before, we used to have to tip-toe and use coded language. Now we can go straight at it.” He added that the inclusion of a number of clearly LGBTQ characters is the “biggest change” between the old series and the new one. And E.J. Johnson—who voices the non-conforming Michael—is thrilled to be a part of the show because of that change.

“Just to have a character who’s out and proud and fabulous … I was blown away that this character exists,” Johnson said.

The show comes with a few other cautionary elements as well: Louder and Prouder focuses more attention on all those adolescent changes being experienced by Penny and her pals. (In the opening episode, Penny seems thrilled with her own animated changes, patting both her breasts and her rear.) And while the Proud family is deeply loving, that loving has some messy moments, too: Characters can lie, shout and talk back.

If nothing else, The Proud Family: Louder and Prouder illustrates just how much American culture has changed in the last two decades. It was ahead of its time in 2001. Now, it’s breathlessly sprinting to keep pace with society’s breakneck changes—even as it sometimes reinforces more traditional values. It’s apple pie festooned with mousse and glitter. The show leans into the past even as it pushes into an all-inclusive future. And that can lead to see-saw motion sickness for many a Christian parent.

After a nearly 20-year hiatus, Penny Proud returns to Willy T. Ribbs Middle School to take stock of her friends’—and the franchise’s—changes. And Oscar, her father, doesn’t like some of those changes one bit.

In an opening segment, Penny draws the viewers’ attention to some of those animated changes, grasping her breasts and shaking her rear. “Our little girl is becoming a young lady, and there’s nothing you and there’s nothing you can do about it,” mother Trudy tells Oscar. Oscar disagrees, and he throws a suit of armor over her (presumably to ward off any would-be suitors). And when Penny expresses interest in attending a school dance, Oscar takes her to the Army-Navy store to buy her some shapeless fatigues.

Michael, Penny’s nonconforming friend, is hiding in the dressing room with a sewing machine, altering those military uniforms into shapely (and slightly skin-baring) outfits. He also brags about his ability to perform heavy-duty makeovers for people (and does so for Penny’s friend LaCienega, who returns to school sporting pimples and unwanted facial hair). When Penny’s girlfriends express an interest in a new boy at school, Michael does, too. And at the school dance, we see Michael dancing with another boy.

Penny temporarily leaves the dance to help a new girl, Maya, “rescue” a zoo-based panda that doesn’t want to be rescued. Penny and Maya break into the zoo to do so, but the panda refuses to leave—and would only consider doing so if they could provide him with free room, board “and some mating.”

Suga Mama’s apparent beau declares in Spanish, “Thank God for tequila,” suggesting that it’s his tool for dealing with Suga Mama. We hear a reference to “Black girl magic.” Bebe, Penny’s little brother, fills his diaper (much to Oscar’s disgust). Penny disobeys her father—leaving the house in fatigues before changing into more typical middle school garb. Someone’s foot is smashed with a cane. A ball thwacks someone in the face. Oscar asks Trudy to deal with her “heathen children.”

Penny’s friends are enraptured by “Makeup Boy,” a social media influencer who, as you might guess, teaches his viewers how to wear makeup (and buy his products). Penny refuses to join in the fawning and creates her own social media platform to prove how easy it is. Sure enough, it is easy for her—but it turns Penny into a monster herself.

Makeup Boy is indeed garishly adorned with layers of makeup, and he speaks with an effeminate lilt as he shills his overpriced products. (“What’s your generation coming to, Penny?” Oscar gasps.) Penny ends his reign by “canceling” him. “Since when are overbaked boys the authorities on how girls should look?” (When Penny runs into him later in the episode, Makeup Boy thanks her for canceling him, because he’d forgotten how to be a good person. While still heavily made up, he now rescues little puppies from the horrors of the makeup industry.)

Penny begins building her own media platform by cleaning Suga Mama’s dentures (while wearing a hazmat suit and doing comical damage around the house). But as her platform grows, she begins canceling everyone who might cross her—and even sends Suga Mama off to a weight-loss camp to get her out of the way. (She and her poodle come back heavily muscled, and the dog beats up Oscar off camera.) She eventually gets everyone fired from school and, through her critical comments, apparently annihilates the movie business. (She’s eventually brought back to earth by her friend, Maya.)

Penny walks in on her disheveled parents. They’re not doing anything, but the show suggests that Penny interrupted their lovemaking. An Alexa-like digital assistant speaker is molded into a shapely female form.