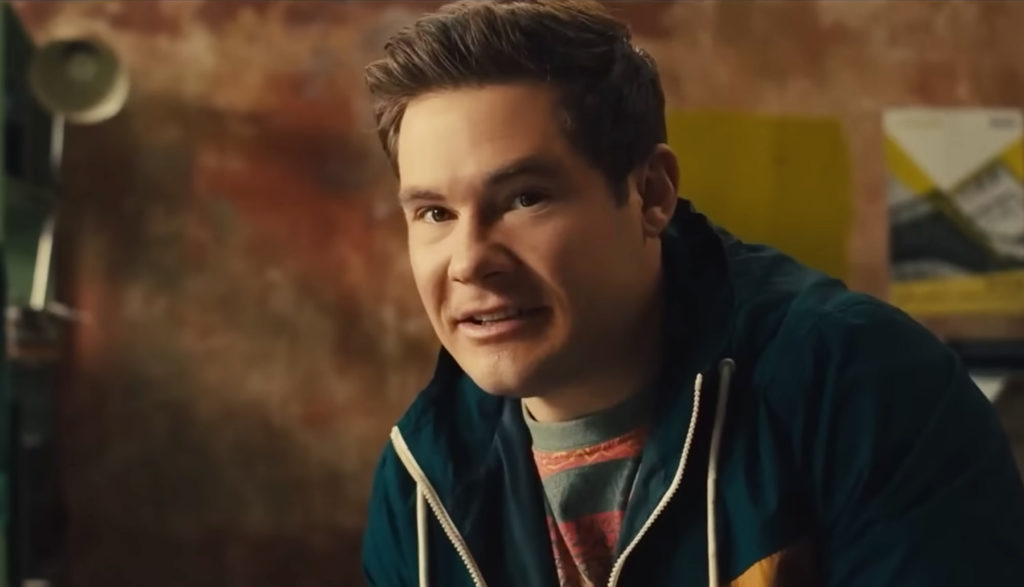 It’s been a whole decade since Bumper Allen’s college a cappella group, the Barden Treblemakers, lost a musical showdown with their archrivals, the Barden Bellas (as chronicled in the movie Pitch Perfect). And Bumper—well, he’s had a hard time moving on.

Maybe, in fact, that corner might be as far  away as Berlin.

When the show opens, Bumper is still hanging out with an a cappella group at Barden University (though all his fellow singers are well into middle age and he’s working there as a security guard). But then he gets a call from Peiter Krämer, one-time leader of another rival a cappella group (the German supergroup DSM, which we met in Pitch Perfect 2). Seems that Peiter’s a talent manager now. And while Bumper’s fame may be flagging in the States, he’s a viral hit in Germany—sort of a shorter David Hasselhoff, if you will. If Bumper moves to Berlin right now, he just might find the success that’s always eluded him back home.

Alas, when Bumper arrives, he soon discovers that Peiter exaggerated his popularity a bit. Bumper must build his fame from the German ground up.

At least he’s not alone. Peiter’s in his corner, as is Peiter’s secretly talented assistant, Heidi. Peiter’s sister, the famous DJ Das Boot, seems far too cool to work with Bumper—but perhaps she’ll come around yet.

But to begin his climb to fame, Bumper must claim a spot on the stage for the city’s prestigious Unity Day celebration—and that won’t be easy. Not with Peiter’s former partner, Gisela, standing in his way.

Pitch Perfect: Bumper in Berlin is your typical singing-fish-out-of-water story, featuring the Pitch Perfect franchise’s most reliably goofy foil. And as the story begins, the show’s vibe feels very much in line with the movie series itself.

The Pitch Perfect movies often felt sweet. The characters were likable and the music was dynamite, which helped the whole thing go down a bit smoother. But tabulate its problems (as we do here at Plugged In), and we find a surprisingly robust list. So, even though Bumper has gone to Berlin, the show has the same sweet Pitch Perfect melodies and frustratingly dissonant beat.

Sexual jokes and allusions often show up, both on and off stage. Same-sex couplings and references are not uncommon on Berlin’s streets and in its clubs. Language can be both off-color and out of tune, with s-words flung like rotten tomatoes.

If you and your family can navigate those issues, Peacock’s version of Berlin might be an OK place to visit. But just like Bumper, you might feel some discomfort while you’re there.

The title means, in German, “a face in need of a slap.” That’s the first impression that Bumper makes on a few people as he tries to familiarize himself in Berlin—especially when he meets DJ Das Boot. Still, with Peiter’s encouragement, Bumper’s still going to try to make a go at finding fame and fortune here. And his first step is performing at a local pretzel festival.

Before leaving for Germany, Bumper sings with his all-male American a cappella group (the Tone Hangers), and they sing what sounds like an LGBT anthem. They talk about being “queens” and offer words of encouragement to others: “To all the queens fighting alone, you’re not dancing on your own,” they sing. (It should be noted from the conversation afterward, however, that the men we hear from are married and have kids, and Bumper frequently talks about his ex-girlfriend, Amy.)

Once in Germany, Bumper goes to a club where two men kiss passionately (in a couple of different locations). Other male and female revelers are dressed in revealing and often androgynous getups. We hear that Bumper is famous in Germany—but mainly because of a viral video where he slipped on some ice and his privates slipped into view. A woman in a revealing outfit performs on stage with shirtless, lederhosen-wearing men who dance and pat their rears suggestively. There’s a reference to herpes.

When Peiter initially calls and tells him about his online impact, Bumper worries that the guy might know too much about him. “Are you a pervert?” he asks.

“A pervert for talent,” Peiter tells him.

People drink. (Bumper fishes out a cigarette butt in a glass of alcohol.) We hear a song lyric referencing champagne, and Bumper’s given a caffeine tablet to ward off jet lag. (He doesn’t take it soon enough and collapses.) We hear the s-word three times and some other stray profanities, including “h—” and five misuses of God’s name. A character flashes two middle fingers to Bumper.