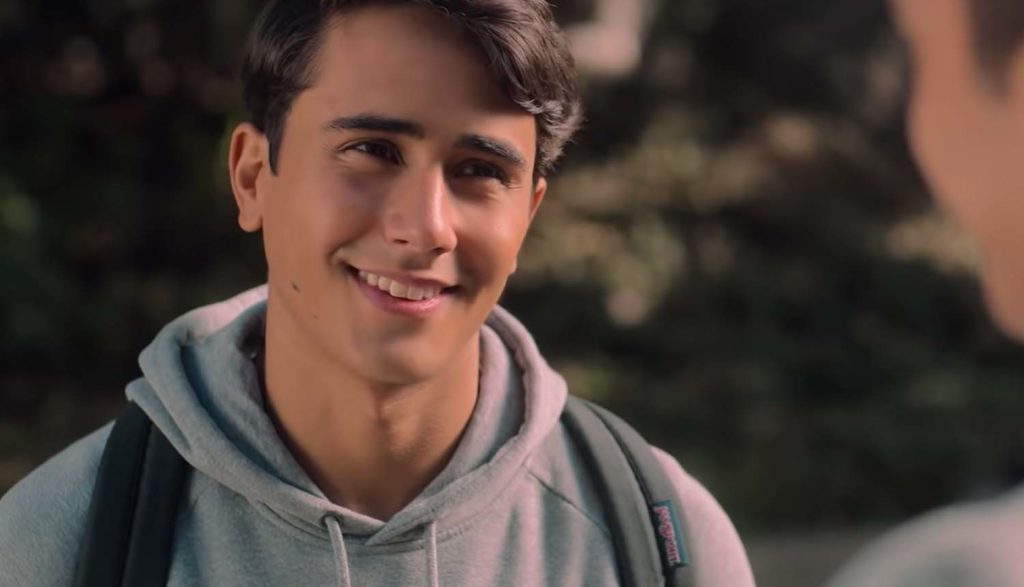 When Simon Spier “came out” a few years ago, his parents were accepting, his friends were supportive, and his classmates even cheered when he shared a kiss with another gay student at the top of the Ferris wheel at the winter carnival.

But it’s not that easy for other kids.

Victor Salazar is gay. But it hasn’t been easy for him to adjust to that reality at at Creekwood, Simon’s alma mater.

And indeed, the road was pretty bumpy over the last few years. The student body of Creekside might have been cool with Simon’s sexuality, but not everyone in the community is so accepting. He struggled to come out to his conservative, Christian parents, too, who looked down on anyone who appears to be “flojito.”

And even though they came around when he came out, there’s still plenty of drama to be had, in and out of school.

Victor’s friends embark on all manner of romances, with people of both the same and opposite sexes. Many are confused about who they are and who they’re attracted to. Despite the title, it’s not just Victor who’s looking for love—often looking for it in unexpected places.

Love, Victor was created as a sequel series of sorts to the 2018 film Love, Simon. Simon even makes an appearance as Victor’s mentor and confidant, much like “Blue” did for him. And like its predecessor, Love, Victor’s narrative focus on teen homosexuality will be an automatic nonstarter for some viewers.

The show also clearly has an agenda, but much like the film, its “inherent likeability cuts both ways.”

Plugged In’s Paul Asay wrote that “Love, Simon aims to influence. Lots of mainstream critics are hailing the way it normalizes teen homosexuality. And even though I might appreciate, on some levels, the film’s authenticity, that very quality also makes the movie’s quiet advocacy for homosexuality that much more problematic for families trying to raise their kids by truths rooted in Scripture. This movie reinforces messages that are all but ubiquitous in the culture today, but does so with a warm smile and a friendly hug. We like Simon. We want him to be happy. And impressionable teens—who might very well know a Simon or two in their own lives—might root for him to find that happiness on his own terms. Not (as we’re all asked to do) on God’s.”

The same can be said of Love, Victor—perhaps even more so since the determining factor holding Victor back from “coming out” is the fact that he’s scared how his Christian parents will react.

But again, despite Victor’s insistence that his story is nothing like Simon’s, the show really isn’t much different from the movie. The language is harsh. We hear several uses of the s-word and other milder profanities. And the sexuality is pervasive. And although nothing progresses past kissing on-screen, kids are having sex and there is a wider discussion surrounding Victor’s choice to wait.

But it still gets one thing right. Victor’s parents love their kids. And their kids love them right back.

Victor and Benji say that they love each other. Benji’s dad tells them not to have sex in his car because he just got it detailed. Victor and Benji kiss, talk about their first kiss, and Victor recalls kissing another boy, Rahim. The two are seen kissing each other. Afterward, Benji admits that he has been drinking, which is significant because it means that he has fallen off the wagon with his Alcoholics Anonymous program. He is driving at the time, and they have reached a DUI checkpoint so Victor switches places with him. This leads to conflict later when it is revealed that Benji has been drinking a few times and lying about it. Felix mistakes a comment made by Victor about he and Benji to be sexually suggestive.

Felix and Pilar (Victor’s sister) kiss multiple times throughout the episode. Felix tells Pilar that he is having thoughts about her that go farther than kissing.

Lucy and Lake explore a possible relationship with each other, which begins when they share a tender moment over the things they learned about themselves from their ex-boyfriends. This moment is shared over champagne, which they say tastes better when it is stolen. Lake references castration. The girls tresspass. Later, Lake ogles Lucy’s back while she changes facing away from her. Lake makes a comment about her own breasts. Lucy and Lake eventually kiss.

Rahim, a muslim, discusses his gay identity with his mom, and she says that she and Allah want him to experience lovc with another man. He prays to Allah in Arabic over a beaded item of religious significance.

Mia visits and confronts her mother in what appears to be a nightclub. The two have a discussion about Mia’s mother leaving. She admits it was a mistake. Mia asks her to move to Creekwood, but her mom says no, apparently choosing her freedom over her daughter.  We hear the s-word.

The characters have resolution in their respective love stories as they are brought back together for town’s annual winter carnival, and Victor inspires others with a speech when he receives an award for bravery.

Victor’s dad tells his wife that he quit his job because his boss and co-workers were making rude jokes about the homosexuality of the homeowners whose house they were working on. He mentions that he cussed out his boss and punched his last boss when he quit his other job. He says h— and “screw off” while telling the story. Victor’s mom says she is proud of her husband for standing up for homosexual people like their son.

Nick says that Victor looks like a “sexy senator” and calls Victor his “boyfriend.” Later, he confesses that he engaged in a lot of casual sex before he and Victor met.

Rahim mentions that his current boyfriend is wise, and he talks about his attraction to Felix.

Victor calls his bravery award the “gay award,” and he says he should feel pretty d— good about accepting it. He thanks his friends and family for helping him accept himself. He tells another guy that he loves him, and the two eventually kiss.

Andrew and Mia make up and kiss.

Lake and Lucy express their love for each other. The two girls kiss.

Victor’s parents kiss passionately, and Pilar asks them to stop (somewhat rudely). Couples of various sexualities hold hands and are implied to be in committed relationships.

We hear the s-word twice.

Victor and his family adjust to their new lives in a big city after moving from a small, conservative town in Texas.

Flashes from the movie Love, Simon show Simon kissing another male student. Several teenage girls wear tight-fitting clothes, cropped tops and short skirts. A slow-motion camera fixates on a gay teenage boy to show Victor’s interest in him. Some male students talk about sex. A teacher tells a male student to pull his pants up. She also says her first kiss was with a gay guy. People make several negatively-charged comments about homosexuality. Simon’s dad suspects a well-dressed man at church may be gay.

Victor confronts another student after the guy mocked him for being poor. The guy shoves him, and Victor drops his lunch. Victor yells at his friend in anger but later apologizes for his rudeness. We learn that Pilar shoved a girl at school for calling her a name. Her dad defends Pilar, saying the girl deserved it, but her mom is appalled. Victor asks his mom if their marriage is OK since they didn’t use to fight so much.

A woman says she prays for her family and thanks Jesus for her son, who is her rock. When Victor’s mom asks where she should hang a crucifix, Pilar says Jesus would probably prefer not to be hanging from a cross. Someone talks about believing in destiny.

A student says that people call him “Lone Stone” because of a rumor that he lost one of his testicles after getting hit in the crotch with a baseball. Someone says Pilar looks like Dora the Explorer “if Dora was exploring a thrift store.” Someone says two girls will get pregnant and drop out of school. A boy talks about vomiting on a ride. Victor’s friend worries if asking him to get churros is racist since Victor is Latino.