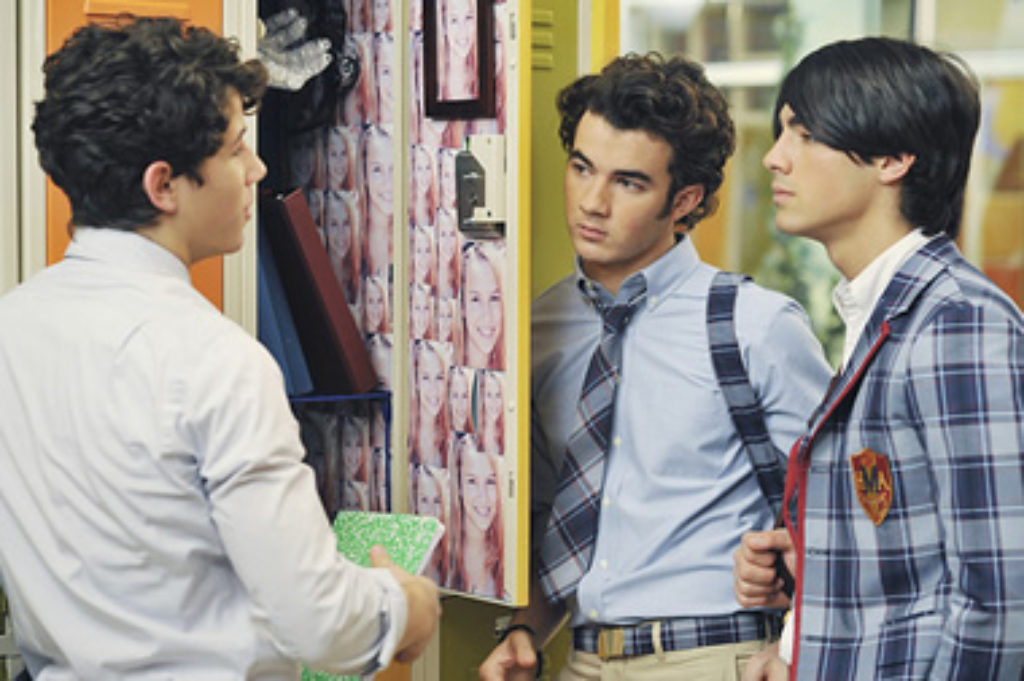 A few centuries from now, scientists may dig up old 2009 episodes of JONAS, watch them, and then scurry away to re-carbon-date them—just to make sure they’ve got their facts straight. Because, really, the program seems a product of a more innocent time. When have we last seen a sitcom starring a rock ‘n’ roll band full of squeaky-clean-yet-squeal-worthy musicians? The era of The Partridge Family? The Monkees? Ever?

Disney Channel’s comedy JONAS stars the near-omnipresent Jonas Brothers (21-year-old Kevin, 19-year-old Joe and 16-year-old Nick) in a veritable lovefest of music, friendship and family. Of course, the show is purely fictional. Or is it? Onscreen, the Lucas brothers are named, um, Kevin, Joe and Nick. Together they form a wildly popular band known as, um, JONAS.

They go to high school like regular Joes and Kevins and Nicks. They live with their mom, dad and little brother Frankie, who’s played by real “bonus Jonas” Frankie Jonas, in a converted fire station on Jonas Avenue.

Ah, so that’s where they got the name for their band.

As if being the poster-of-the-week (every week) for Tiger Beat wasn’t enough for the Jonases, JONAS ups the envy ante. The firehouse is a huge tween playroom to the major max, dude. The boys shimmy down fire poles, choose their wardrobes via virtual hologram and grab snacks from their own always-stocked vending machines. Moreover, their lives are, at least in the show’s early going, paparazzi free: At school, it seems, the Jona—er, I mean, Lucases—are largely left alone to engage in brother-centric banter, only occasionally interrupted by longtime friend Stella and/or JONAS super fan Macy.

Hunks o’ Hunks o’ Burnin’ Love
Not that the brothers escape the spotlight entirely in those high school halls. The boys’ celebrity is sometimes a critical part of the plot. In the series’ premiere, Stella designs special concert attire with rip-away sleeves (she calls it “Stell-cro”), which Macy’s supposed to “test.” She runs, squealing, over to Joe (who, incidentally, is not wearing Stell-cro) and promptly shreds his school uniform, making him look like a dilapidated refugee from The Beverly Hillbillies.

All this garment-rending might sound a tad tawdry, I know, but in its Disneyfied execution it’s not. Dig a little deeper into our culture’s collective psyche, and you may come back full circle, of course. But to make the accusation stick, you’ll have to apply the same logic to the fact that the Jonas Brothers are already “sex symbols” for legions of teen and tween girls.

(And for the record, Plugged In is all for digging.)

Love Lessons
While the brothers embrace their pinup status in JONAS, they poke fun at it, too. In the show’s first outing, we learn Nick never writes love songs before breakfast because they’d have lyrics like, “My stomach’s growling for love.” In episode No. 2, we see Joe taking photos of himself, preening comically in front of the lens. We even get to see someone (gasp!) romantically diss Nick.

Isn’t that some sort of sign of the apocalypse?

More soberly, though, it’s this self-deprecating sense of humanity that helps JONAS shine. Take, for example, a scene in which the boys hatch a two-point plan to mark their mother’s birthday: Point 1) They hope to transfer the family’s home movies to DVD. Point 2) They plan to bake a cake. But when Joe and Kevin pour cake batter into a colander instead of a pot—splashing the sticky stuff into the crate of family movies—they don’t just spoil the cake, but the birthday celebration as well.

They feel awful. And to make matters worse, Mom has apparently forgiven them. “I love you boys more than anything else in the whole world,” she says, her smile only slightly forced.

“We batter, burn and foam all over our home movies and she forgives us?” Joe seethes later.

“Yeah, and she’ll never mention it again. She’ll be all sweet and loving,” Nick fumes.

We’ve just witnessed the Jonases teach an outrageously old-fashioned lesson based on how family members should treat one another. And they manage to make the lessons kinda funny to boot.

Send All Fossils to …
Not everything Kevin, Joe and Nick do is completely laudable. The big brothers play pranks on each other, and little brother Frankie steals his sibs’ video camera solely for blackmail leverage. There’s even a bit of bathroom humor: One of the old family videos shows Joe dancing like he needs to go somewhere private fast, and the boys re-create the scene later with the help of a bottle of water.

But even when the brothers watch the aforementioned tape, they kid Joe by saying that it looks like he “has to go to the bathroom,” staying well away from the ruder slang that would surely have been mandatory had the Jonases landed a few channels over on Nickelodeon.

It makes me wish there were a few more shows like this for scientists to uncover after we’re all long gone.