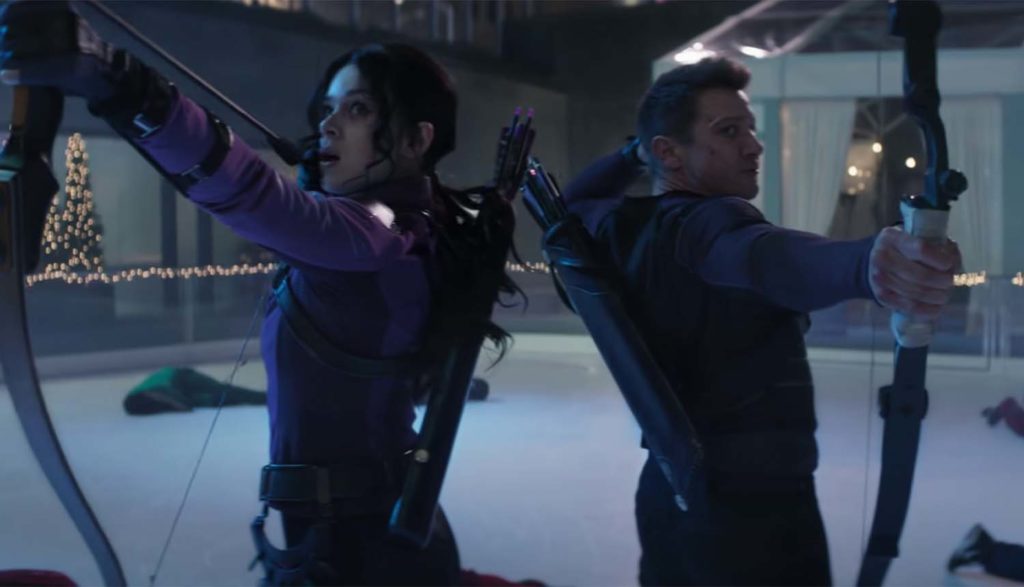 It’s not easy being gifted.

First off, she’s rich. Or at least her mother, Eleanor, is. Get a speeding ticket? Need a new dress? Accidentally destroy a university bell tower? Mom can just whip out a bit of plastic and those little problems will vanish like 6 a.m. mist.

All that money helped pay for gymnastics lessons. And martial arts training. And fencing, of course. And, oh, especially for all that archery practice—a discipline she’s especially gifted in. She’s considered one of the best archers in the country, if not the best. Well, the best for anyone who’s not a part of the Avengers, that is.

You can, in fact, blame Kate’s turn to the bow on said Avenger, actually. When she was just a girl, a bunch of Loki-led aliens destroyed a good chunk of Manhattan, where her parents owned a swank townhome. And while she lost her dad that day (and a good chunk of that townhome), she did see Hawkeye show off his skills while saving little Kate’s life.

But even when you’re rich and beautiful and talented and (did I mention) rich, life doesn’t always sail straight as an arrow. Sometimes, it takes more of a boomerang curve.

Kate could see the bend coming when her mom decided to marry Jack Duquesne, a man with plenty of secrets of his own. In an effort to uncover a couple of them, she found herself in an illegal auction where she (ahem) came into possession of a mysterious outfit said to belong to Ronin, the lethal vigilante who slaughtered countless bad guys, made enemies of the ones who were left and then just disappeared, as mysteriously as he’d come.

But Kate’s not thinking about any of that. She simply knows a cool outfit when she sees one and some villains who need a quick lesson. She dons the outfit, doles out said lesson and runs away—not aware that her opponents may well mistake her for Ronin. And as such, they’ll do anything to bring Kate’s newfound career to an abrupt, painful end. She may be gifted in many areas … but common sense is perhaps not one of them.

Looks like Kate could use a hero right about now. And thankfully for her, one’s in town. Clint Barton—a.k.a. Hawkeye, a.k.a. Ronin—knows that whoever has donned his old uniform just might be in for a world of hurt. If she’s lucky.

Tie a Bow on It

Disney calls it the Marvel Cinematic Universe, but many of the most recent chapters have landed on the small screen instead, setting the table for just who might be part of the Avengers in a post Steve Rogers/Tony Stark world.

And for the most part, these Disney+ shows have been pretty decent, both in terms of creativity and content. Oh, we’ve seen some bumps along the way: WandaVision’s magic; The Falcon and the Winter Soldier’s violence; the fluid sexuality of the titular character from Loki. But if the shows have not been straight-arrow pure, they’ve at least landed around the target.

Hawkeye, albeit very early on, seems of apiece with those other Disney+ series, or maybe even a bit better. It’s exciting, surprisingly funny and the interplay between Clint and Kate is pretty cool to watch. And—with a couple of caveats below—it’s starting out relatively clean.

But we’re far from giving this a pass.

While Kate’s sexual leanings haven’t started, um, leaning yet in this show, her history in the comics is a little unsettled, with her sometimes portrayed as straight and more recently bisexual.

And, of course, families must steel themselves against the usual assortment of Marvel issues, including frenetic (and sometimes jarring) violence and occasional bursts of bad language.

When it comes to entertainment, Hawkeye hits the mark. But in other areas important to families, we fear the show may be just stringing us along.

Kate Bishop learns that her wealthy mother is about to get married to the mysterious and erudite Jack Duquesne. But Kate’s not at all sure about her mom’s new beau—especially after she discovers Jack’s rich uncle has been murdered. Kate stumbles upon the dead uncle, Armand Dusquene, lying on a carpet in a pool of his own blood. (We see a gash on his head.)

But Kate’s got other problems, too. She swiped and donned an outfit once owned by the mysterious vigilante Ronin. And now not only do the police seem to suspect her in the uncle’s murder, but New York City’s underworld thinks she’s their old nemesis and means to kill her.

Meanwhile, a vacationing Clint Barton sees all this unfold and decides he won’t be able to head home to the farm with his kids, after all. He’ll need to secure the outfit and keep Kate safe—and hopefully make it back home in time for Christmas.

A massive fight breaks out in an equally massive wine cellar, with Kate hitting, kicking and (especially) thwacking assailants with wine bottles. (They often don’t break and act as clubs.) Arms are broken and people are knocked out, and Kate nearly cracks someone’s neck with her legs. She fights with villains in the street, too—with several smashing car windows to get at the girl where she’s hiding.

In flashback, Ronin stabs someone to death in the streets, and Hawkeye fires arrows at alien attackers (killing several of them). A townhouse is mostly destroyed during a 2012 alien invasion of Manhattan, and we learn that Kate’s dad died in the attacks. A dog bites and pulls at the leg of a bad guy, even as the dude kicks at the dog. People shoot guns in a fight.

Clint is greeted by a fan as they both use urinals, and the fan asks for a selfie. “Now is not really the appropriate time,” he tells the guy. Over dinner, Clint and his kids throw napkins at each other in a fancy restaurant, and he cautions his youngest that he’s going to “puke” if he eats anymore. At college, Kate shoots an arrow at an ancient bell in a tower—accidentally destroying both. Her mother scolds her afterward.

We hear one s-word and one use of “h—.” God’s name is misused twice. Characters drink champagne. We see some graffiti saying “Thanos was right,” referring to the blip that erased half of life in the universe. A couple lightly kisses.