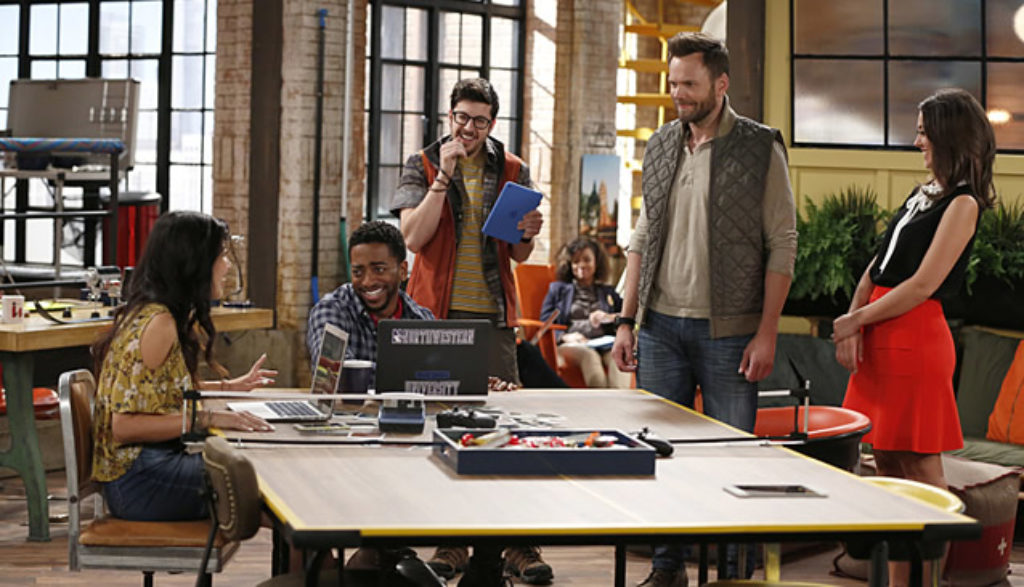 Curse those Millennials and their selfies, their Facegrams and Instasnaps, their gifs and memes (whatever they are). Curse all their annoying youth and vibrancy, which they wave in our rapidly wrinkling faces. Thank goodness we Boomers and Gen-Xers don’t have to work with them or anything. They’d probably want to, I dunno, do something crazy like a movie vodcast. Nuts, right?

Jack, one-time star reporter for the adventure lifestyle magazine Outdoor Limits, made his name scaling mountains, swimming seas and being the most adventurous adventurer this side of Indiana Jones.

But alas, Jack’s trailer was hitched to a horse that has no place in the 21st century: a paper magazine.

Outdoor Limits‘ founder, Roland, has run into some financial obstacles printing the magazine—namely printing the magazine. From now on, he decrees, Outdoor Limits will be an online-only publication—something that, by decree or something, requires a whole bunch of Millennials to make viable. But hey, we’re talking Millennials now, and clearly someone—some adult—is going to have to supervise them to make sure they don’t spend all their work time combing their hipster beards. Jack is that person.

It’s an awkward new role for Jack, given that for years the only tweets he’s known have been the delightful songs of jungle egrets. And frankly, despite the fact that they’re working for an outdoor magazine, these young ‘uns know next to nothing about the outdoors. Tech-whiz Clark, for instance, knows a disturbing number of ways to survive a zombie apocalypse, but he’s never been out of the city. Cooler-than-thou Mason never ventures outside if he can help it. Emma believes that Jack is more archaic and irrelevant than an iPhone 4, and that’s being generous.

It’s Hip … As in Broken Hip

If there’s a safe television haven from which to make fun of Millennials, it’d be CBS. The network’s average viewer is a spry, AARP-friendly 59 years old. You won’t find the Tiffany Network chasing trends to woo new viewers: It hasn’t dominated the Nielsen ratings for the last decade or so by being innovative. CBS knows its audience, and it knows what those viewers like—and The Great Indoors feels like the sitcom equivalent of telling the youngsters to get off its lawn.

The show has some funny moments. Joel McHale of Community and Talk Soup fame plays Jack with all the smirking, world-weary Gen-X charisma he can muster, and his supporting cast is strong. There’s humor and even a lesson or two to be mined in this clash of cultures. Just as the youthful workers at Outdoor Limits will surely learn about real life sans screen from Jack, so Jack will pick up a trick or two from these young, hip upstarts. The world, after all, is changing, and Jack will have to change with it.

But in its early going, The Great Indoors tells two versions of the same joke all the time. Oh, look at those goofy, pampered, unrealistic Millennials! Aren’t they funny? Or, in a less frequent variation, Oh, look at aged, out-of-touch Jack. Isn’t he precious? It’s kinda funny at first, but it gets old quickly.

The Great Indoors may lack originality, but it also lacks something else: lots of problematic content. There’s no violence. The language is—again in the very early going—relatively clean. And it’s unlikely that bedroom scenes will be common in this workplace comedy.

This is not to say it’s fresh-mountain-snowfall clean. Sexual innuendo and references to Jack’s promiscuous past are sometimes dredged up. Awkward double entendres can be dropped. It’s only by comparison to today’s crass television landscape that The Great Indoors feels pristine.

So while the show may look like a babbling mountain brook compared to what else is out there, discerning television mountaineers would caution you to always treat even seemingly clean water before you drink it.

Budget cuts claim a host of office-based perks, much to the annoyance of the Millennial staff. “A modern office without yoga classes, dry cleaning and a waffle bar seems ridiculous,” Mason complains. Jack only gets bent out of joint when he learns that the website won’t pay for him to live in luxury hotels anymore: He’ll have to find a real place to live.

Jack temporarily moves in with Clark in his tiny apartment. “There are coffins with more room,” Jack says. He and Clark are forced into such a tight space that Jack suggests their “genitalia” are touching. (Clark also warns Jack not to mock him for never having known “the touch of a woman.”) Jack says that the fact that he’s stayed in hotels for the last 15 years led to, among other things, “five regrettable hookups.” (Clark counters that the fact they involved sex makes them not so regrettable, in his estimation.) Jack brags about himself in his sleep—a fact Brooke recalls and lets slip. (Their past relationship is supposed to be a secret.)

Jack burns his hand on an exposed pipe in Clark’s apartment, and Clark says the two can be “burn buddies.” There’s a gag about an unseen worker’s body odor. Clark tells Jack that he’s only allowed to flush his toilet once a day. Later, a portable mattress balloons unexpectedly, forcing Jack’s face down on the toilet seat, which he discovers is still warm.

Clark stores wine in a portable shoe rack. He preps beer for a housewarming party, and he stores a bottle of champagne in a toilet filled with ice. Roland serves employees Scotch, then fires them (temporarily) for drinking on the job. We see the bar of Jack’s friend Eddie. People drink beer.