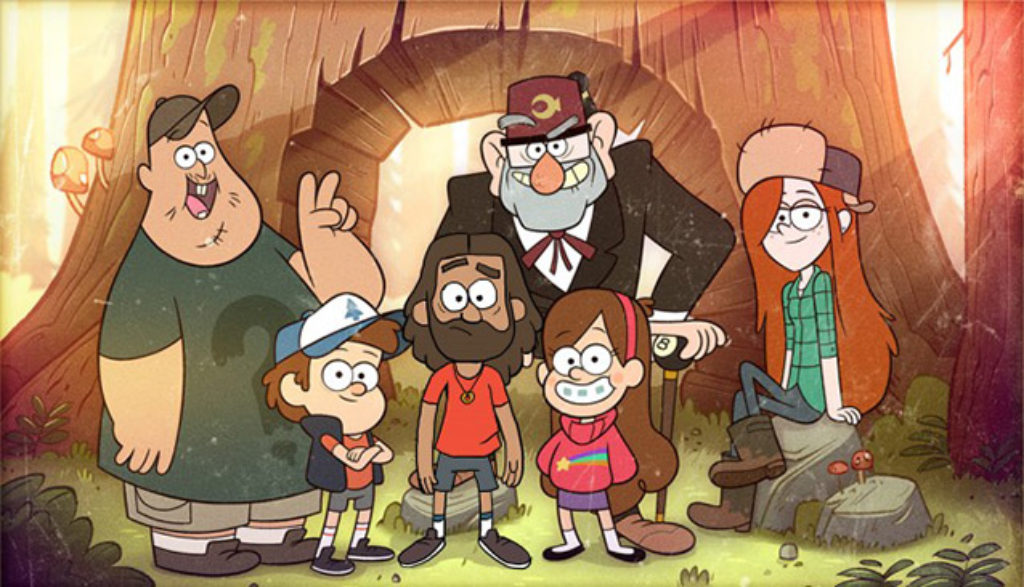 Now imagine a place exactly like that—except without the rides, the characters or the ever-smiling employees. Imagine that the only thing remaining of the Happiest Place on Earth is a tacky gift shop with a fez-wearing con man counting cash up front and a dank, fake freak show out back.

The main players in this supernaturally tinged toon are 12-year-old twins Dipper and Mabel Pines, living and working for the summer under the tutelage of their great uncle (or, as the show says, “Grunkle”) Stan. It’s he who runs the Mystery Shack and populates it with all manner of fabricated distractions, including muscle-bound Jackalopes (which he calls “Six Packalopes”), wax statues and “preteen wolf boys” (actually, Dipper plastered in dog hair). It’s he who makes the Shack a tourist trap that even P.T. Barnum would have called tacky—though he does get a little help from his seasonal worker bees, aloof teen Wendy and goofy man-boy Soos. It’s he who will do anything and everything to separate tourists from their cash.

Except, that is, plunge into the surrounding forest and bring back some real mystery to the Mystery Shack. After all, the lands around Gravity Falls—a town just down the road from Twin Peaks and a stone’s throw, it would seem, from Transylvania—are practically bursting with preternatural oddities, ranging from ghosts and gnomes to mermen and Manotaurs (very manly Minotaurs). Indeed, if you took Nickelodeon’s show The Fairly OddParents, threw it into the Oregon forest and sprinkled it with a dash of The X-Files (if The X-Files had been created by Seth MacFarlane) you have a pretty good idea of what Gravity Falls looks like.

The Los Angeles Times called Gravity Falls “gently twisted.” And the show does have some edge to it—enough so that it would actually feel more at home on Cartoon Network than in the House of Mouse. That’s to say it sometimes features content that brushes up against the limits of its TV-Y7 rating. It feels trendy and, yes, twisted, especially when you consider the age of its target audience.

Dipper and Mabel go on semi-perilous adventures, engage in 12-year-old infatuations and learn only the thinnest of morals at the end of each episode. Grunkle Stan—despite his obvious affection for Dipper and Mabel—is perhaps the worst TV role model this side of J.R. Ewing.

Slippery spiritual content—every bit of it played for giggles and guffaws—includes magic, incantations and crystals with the power to alter the world around them. Stan’s hat evokes the idea of Masonic headgear, and we see other such icons scattered across the landscape.

On the positive side of the ledger, the world of Gravity Falls doesn’t douse viewers with the kind of sexual double entendres and teen sensibilities crowding Cartoon Network’s  Adventure Time or Regular Show. Language doesn’t seem to go beyond the occasional “heck” or “butt.” And characters seem to care for one another in their own whimsically flawed ways.

Well, all the characters who aren’t named ‘Lil Gideon, that is. He seems borrowed directly from Family Guy.

Mabel tells Grunkle Stan that he could actually make more money if he was nicer to his customers. So Stan makes a bet with Mabel: He’ll leave on vacation for three days and turn the store over to her. Whoever makes the most money wins.

Right away, Mabel gets to the task of being nice. She encourages Soos to follow his dream of being a dancing question mark. She allows Dipper to drag in a real supernatural beastie from the forest. Etcetera. The results are disastrous. Dipper’s monster destroys much of the Shack and sends tourists to the hospital. Soos is Maced. And Mabel devolves into a mini-Stan while trying to get things back on track. Stan, meanwhile, spends his vacation participating in a Wheel of Fortune-like game show, but loses all of his winnings when he bets everything on guessing one word: a six-letter word that people use to get something they want. Stan’s guess of gimmee is wrong, and he learns that the please “can apparently make you money.”

Elsewhere, a wallet vomits up spare change. A tourist is hit by a stuffed head. Shack workers mark prices way up for the gullible tourists. Mabel jokingly suggests to a customer that she stick a bumper sticker over her husband’s mouth. We see some slapstick violence. Stan lies and (sort of) steals. Characters say “butt” and “heck.”

Stan takes his clothes off on TV to prepare for a “cash shower.” (Everything below the waist is shielded by a podium.) That question mark costume Soos wears reveals his underwear.