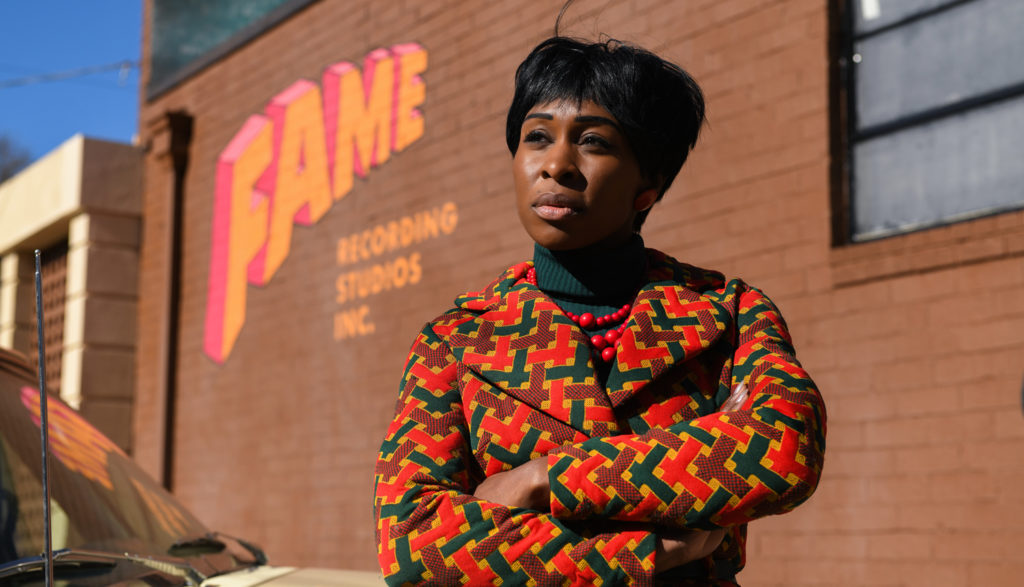 Heavy lies the crown, even when it rests on the Queen of Soul’s brow.

From the time she first sang in her daddy’s church, Aretha Franklin was pegged for greatness. Her voice—earthy and heavenly at the same time—was so superlative that fellow singer Marianne Faithfull called it “the voice of God.”

Franklin herself would, and did, call it a “gift from God,” but there was more to her success than a tremendous set of pipes. Journalist David Remnick said it was “her musical intelligence, her way of singing behind the beat, of spraying a wash of notes over a single word or syllable, of constructing, moment by moment, the emotional power of a three-minute song.” She was a first-rate pianist, too, and had a nearly photographic musical memory.

During the 1998 Grammy Awards, opera singer Luciano Pavarotti called the producers and announced he’d be unable to perform as planned. As the live show rolled on, desperate producers approached Franklin to ask if she could sing “Nessun Dorma,” the song her friend Pavarotti had been scheduled to perform. She listened to Pavarotti’s practice tape, agreed to give it a shot, took the stage moments later … and brought the house down.

But for all her ability and all her success, Aretha didn’t sail through life without more than her fair share of storms.

“Singing’s always been my guardian angel,” Aretha says in the first episode of this season of National Geographic’s anthology series Genius (of which Aretha is the third season). “Keeps me safe.”

She needed one. The men around her sure didn’t do much to protect her.

Her father, legendary preacher C.L. Franklin, was as notorious for his many affairs as he was famous for his “million-dollar voice.” But he knew talent, and he knew he had one in Aretha. When she was still a child, Aretha was being groomed for stardom, with her daddy at the wheel, taking her on the road when she was way too young and when dangers lurked everywhere. The show reminds us that Aretha had her first child when she was just 12 years old.

By the 1960s, Aretha’s career was being managed by Ted White, her volatile, hard-drinking husband. The night she was given her shiny tiara as the Queen of Soul in Chicago, according to the movie, she was hiding a black eye (under a mountain of makeup) that her husband had given her.

Aretha bounces between those two timelines, splitting the show’s time between young Aretha (known as Little Re), honing her talents and growing up way too fast; and Aretha in her prime, demanding “Respect” and asking for some “Amazing Grace.” But while Aretha (which stars Emmy, Tony and Grammy winner Cynthia Erivo in the title role) is a powerhouse portrayal of one of America’s greatest talents, it’s not without its problems.

Rolling in the Deep

Like Aretha’s voice, her life—and this show—blends earthy, even dirty reality with an effervescent hint of transcendence. The show gives full voice to Aretha’s church background and her longstanding faith. It spends almost a full episode exploring the creation of 1972’s Amazing Grace, her gospel-drenched double album, which became the highest-selling album in Franklin’s 50-year career. But neither she, nor the people around her, always act in a way that honors the God they serve.

Her father’s tawdry affairs are documented (if not shown in great detail). Aretha’s own innocence is snatched away during a tour supposedly dedicated to God. Racism stitches its own fabric into Aretha’s tapestry, with violence a too-frequent threat. We see men hit women (and women sometimes hit back). Characters smoke (both tobacco and marijuana) and drink, sometimes to excess. And, naturally, we hear plenty of profanity, too, including the s-word.

None of this content feels particularly gratuitous, given the content complexities of Aretha Franklin’s real life. This is her story, and it’s told (more or less) as it happened. Aretha, unlike Aretha, doesn’t bother to hide the bruises.

But while that can make for a more complete and engrossing narrative, those problems can obviously make for a difficult watch, especially for younger eyes. Aretha Franklin (who died in 2018) was a unique talent. And Erivo embodies the Queen of Soul about as anyone could (pending, of course, Jennifer Hudson’s take on Franklin this summer in Respect). But her life was as difficult as her voice was lovely. And this show lays it all out.

Aretha Franklin and her husband, Ted White, travel to Muscle Shoals, Alabama, in 1967 to record an album—maybe Aretha’s last chance at mainstream success. But when Ted drinks heavily and grows more belligerent to studio musicians and execs, the recording falls apart after just one song: Aretha heads home to Detroit without her husband. Meanwhile, in 1954, a young Aretha (called Little Re) watches her father, C.L., preach passionately from the pulpit, carouse with a legion of ladies and slap Melba, C.L.’s long-standing companion and a woman whom Aretha had looked to as a mother.

We see C.L. knock the woman down with the force of his blow, and she leaves the Franklin house shortly thereafter (her taxi chased by a tearful Little Re). Back in the later chronology, Ted slaps Aretha in a dressing room. Aretha slaps him back, and Ted hauls off a mighty hit before the camera cuts away. Later, a tearful Aretha wipes away makeup, revealing an ugly black eye. Ted gets into a fight with a record producer; we don’t see most of the fracas because Aretha leaves the room. But when she returns, the hotel room is trashed.

When a tire blows out during a road trip into Alabama, C.L. and Aretha are harassed by racists—one of whom takes a bat and smashes a back window as a terrified Little Re screams. C.L. eventually gives the assailants his car, and the two walk into town to buy a new one. When a car dealer asks suspiciously where C.L. got the money to buy a new car, C.L. says, “I’m a preacher, and I think we both can agree that God is good.”

We see C.L. deliver a powerful message in church and record another sermon for a record. Little Re belts out a spiritual in her father’s church and sings softly in the back seat as a sort of ward against the racists harassing them. As an adult, Aretha gently sings another spiritual on the way to Muscle Shoals. When a reporter asks her whether her work in pop music means she’s turned her back on the church, she says, “Well, my voice is a gift from God, so how can I possibly do that?” We hear someone say that Aretha’s voice can make “salvation seem erotic.”

C.L. dances closely with one woman and caresses another—neither of whom are Melba, his supposed paramour. Melba says that his “hussy” confronted her in the grocery store, accuses him of sleeping with loads more women and lets slip that Aretha’s mother ”left you [C.L.] and the children because she got tired of all your girlfriends.” Ted (who first meets Aretha when she’s just 11 or 12 years old) gets wildly jealous as her husband as Aretha jokes around with her studio musicians (all of whom are white, which seems to add additional umbrage to Ted’s rage).

Ted drinks a lot, including while driving a car. C.L. throws a party where attendees drink and smoke (including marijuana). Aretha and others smoke cigarettes. We see a confederate flag and hear references to “black power” and “white power.” Aretha tells Ted that she wants a divorce. Characters say the s-word three times. We also hear “a–,” “b–ch,” “d–n,” “h—,” as well as the n-word. God’s name is misused three times, including twice with the word “d–n.”