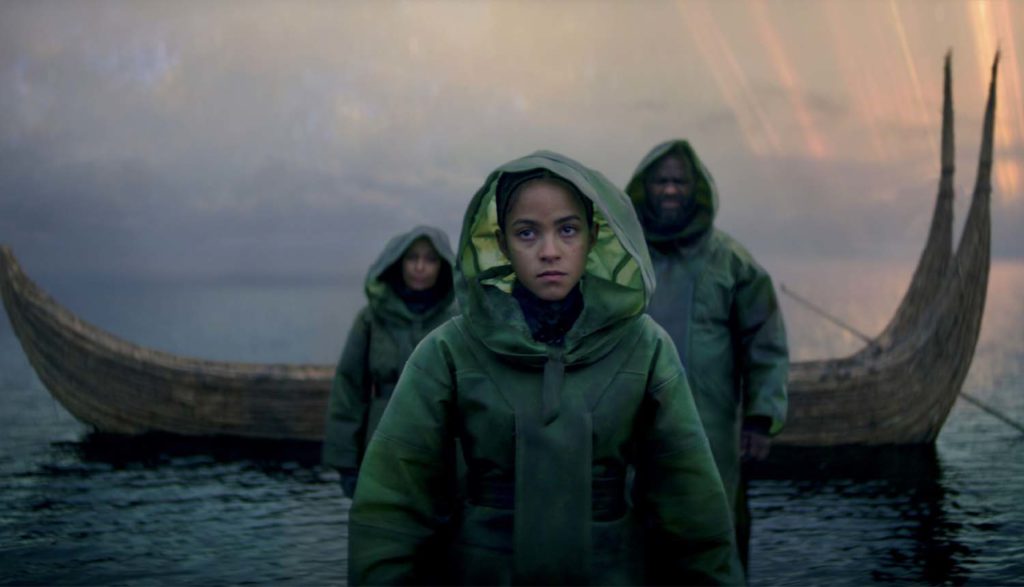 The Galactic Empire is dying. Which is a big surprise to its emperor.

Give the thing a quick glance, and the Empire looks like it’s doing pretty well, ticking along just as it has for the last 12,000 years. Oh, sure, there may be some problems around the edges. And, yes, a terrorist attack just killed 100 million people in the heart of the capital.

But as far as Emperor Cleon’s concerned—well, one of three clones of the original Emperor Cleon who live in the palace these days—these are just blips in an age-old line of success and domination. In his opinion, the Empire has another 12,000 years in it yet. With another Cleon clone to lead it, of course.

But Hari Seldon disagrees. And he and his followers were exiled to the edge of the galaxy because of it.

Hari Seldon is an unwilling revolutionary. He’s a mathematician, actually, one who stumbled upon a new science called psychohistory. Math, it seems, can predict the future when looked at the right way. It’s woefully inaccurate at predicting what any one person might do, of course. But when the sample size runs to the trillions, it’s pretty exact. And as much as the Emperor might wish otherwise, the numbers don’t lie.

But within that math, Hari suggests, lies a bit of hope. While nothing can stop the Empire’s fall, Hari believes it’s possible to soften the tumble. And instead of dealing with a 30,000-year age of darkness, it’s possible to shrink that period of galactic barbarity to a mere millennium. But to do so, Hari and his fellow exiles need to compile a lexicon of the galaxy’s most important bits of knowledge so that civilization won’t have to reboot from scratch.

Cleon—or, rather, the hearty-and-hale version of Cleon called Brother Day (Brother Dusk and Brother Dawn are an old man and a young boy, respectively)—wanted to execute Hari and his young apprentice, Gaal, for undermining confidence in the Empire. But instead, he decided to ship them and 1,700 of his followers off to pursue their little project on a faraway frozen rock aptly named Terminus, just in case Hari’s right. And if they freeze to death? Well, who’s going to miss a handful of encyclopedists?

Gaal knows that the way ahead will be difficult indeed—more difficult than perhaps even Cleon or Hari himself could imagine. She’s seen Hari’s work, and she has spotted some troubling gaps in the equation. Success is far from a mathematical certainty. It is, as Hari himself admitted once, closer to a prayer.

And Gaal doesn’t pray to the same god she used to.

That is where we begin our dissection of Foundation, Apple TV+’s ambitious take on Isaac Asimov’s seminal science fiction series: religion.

Faith—faith in gods, faith in the government, faith in science—is an important theme in both the original books and the series. Indeed, Hari’s work takes the shape of an organized religion in the books, and we can already see how both math and science can be confused for religion already. Math divines the future like an old Greek oracle, but far more exactly. Gaal must sometimes remind people that Hari is no “god.” She herself seems to pray at the altar of arithmetic, reciting prime numbers almost as if they made up a catechism.

More traditional-looking religions make an appearance here, too, and they’re not particularly positive. Gaal comes from the planet Synnax, which in Asimov’s books is merely described as “provincial.” In Apple TV+’s take, Synnax’s provincial character comes in the guise of a deeply religious society—one so religious that all scientists and mathematicians on the planet were slaughtered.

It’s not the only place where Apple TV+’s Foundation veers from Asimov’s books, of course. Indeed, nearly all the show’s MA-rated issues are galaxies away from the novels.

Sex scenes are surprisingly frequent and intense. Brutal, bloody and even gloopy deaths mar the scenery, too: In the first episode, a man literally explodes. Foul language is also sprinkled through the show, like asteroids floating through space. And all of these elements, it seems, push the show further and further away from Asimov’s original work—a work that, having won a Hugo Award for the “Best All-Time Series,” probably didn’t need a lot of improvement.

It’s not unusual for makers of television and movies to take a beloved property for adaptation without ever understanding why the property was so beloved in the first place—marring its legacy on the way. Apple TV+ seems set to add to that litany of past mistakes—and make a few new ones en route.

While the show begins on icy Terminus, most of the story takes place 35 years earlier. Gaal travels to Trantor, the capital planet of the Galactic Empire, after winning a contest and a chance to work with famed mathematician Hari Seldon. But shortly after she meets him and his adopted son, Raych, Gaal learns that both she and Hari will likely be arrested tomorrow. And indeed they are. Gaal, as the only other person in the galaxy qualified to even understand Hari’s work, is asked to discredit Hari’s theory that the Empire will implode. If she doesn’t, she will likely die along with him.

A bunch of older kids dare each other to climb a hill surmounted by a floating artifact (and protected by a powerful field of some kind). One boy agrees to go after a girl in the group promises she’ll let him touch or ogle her breasts (using an obscene term for them). Another boy tries to climb the hill but faints dead away and has to be rescued.

One man is executed by being blown to bits somehow. What’s left looks like melted Jell-O. A suicide attack destroys an important conduit to Trantor—the Sky Bridge—which kills (we’re told) 100 million people. (We see lots of panicking people before they die, but few actual fatalities. We also see the suicide bombers blow themselves up.) Gaal and Hari are both threatened with execution.

We see Gaal on her home planet of Synnax, having her “prayer stones” removed from her cheeks. (Blood seeps from one of the wounds.) Those stones, her religion states, keep her in communion with her god; once they’re removed, she’s essentially separated from the almighty. She seems to feel the weight of her decision but declines the opportunity to pray one last time before they’re taken out. She later visits a church and a priest from her faith, who emphasizes that she’s unseen by god (whom he calls “the Sleeper”). But the priest offers her help anyway.

Characters say the s-word three times, along with “d–n” and “p-ss.”

Hari, Gaal, Raych and 1,700 other folks are on their way to Terminus—a journey that’ll take four years to complete. But the trip has its stresses. Constant drills—designed to help the colonists survive on the hostile planet—indicate that a great many of them will not survive. Gaal serves as Hari’s right hand, and the responsibilities can be daunting. And for whatever reason, it seems as though Hari’s relationship with Raych, his adopted son (and Gaal’s secret lover) is increasingly strained. Back on Trantor, meanwhile, Brother Day looks for someone to blame for Episode 1’s terrible terrorist attack—and he finds convenient marks in a pair of visiting dignitaries.

Gaal and Raych have sex twice on screen (once in a swimming pool). We don’t see any critical body parts, but we do see plenty of skin, and the movements leave no doubt as to what’s going on. We know the two have coupled plenty in the past—in part, apparently, to sow seeds for the future on Terminus. The fertilized eggs of Gaal and others are removed and stored (we see Gaal, in her underwear, undergoing the procedure), with the idea that they’ll be later utilized to populate the planet. The doctor tells Gaal that one woman refuses to undergo the procedure, though: When Gaal talks to her, the would-be mother fears that if she doesn’t have the baby now, she might never have a chance later (given the perils waiting for them on the planet). But later, at dinner, the would-be mother asks for someone to pass her the wine, suggesting that she went through with the procedure after all. A woman (or woman-like figure) lies on a table, her figure suggesting various bits of anatomy.

Several people are hung. (We see at least one or two jerk on the rope as they die.) Someone is stabbed to death, and someone else is ejected into space with the bloody murder weapon. Several people are gunned down (often accompanied by splashes of blood). An android suffers a wound to her shoulder: We see the wound and watch as she fixes it—which includes cutting away the skin and removing shrapnel from the wound. We hear that dead bodies orbiting Trantor are entering the atmosphere and bursting into flame as their orbits decay. Someone talks about tasting the ash of dead people on his tongue all the time now. Drills evoke plenty of dangers, including poisonous gas and terrifying creatures.

Characters say the s-word twice and “h—” once.