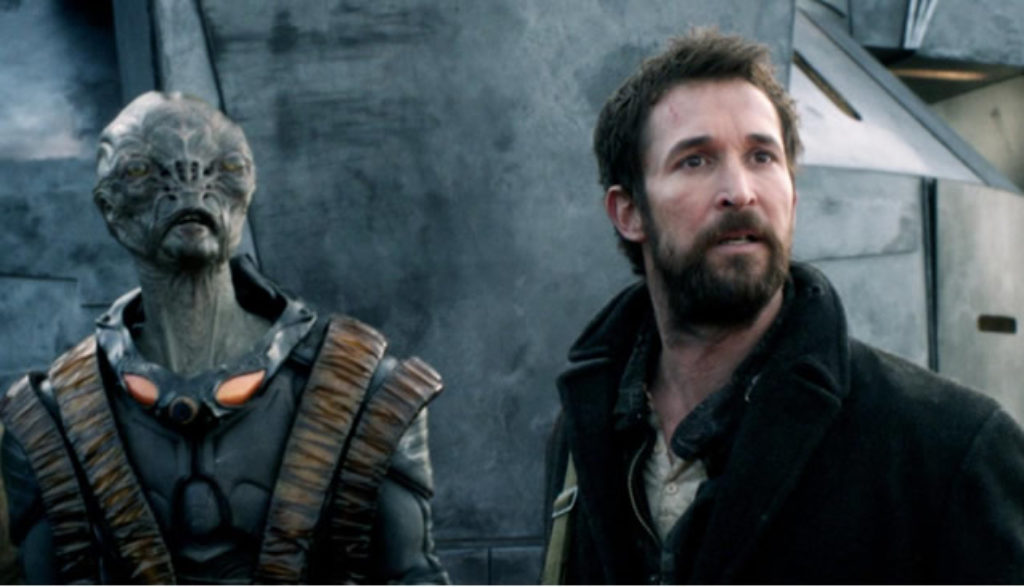 Chicken Little has been scorned for generations for being an alarmist, mistaking a falling nut for the end of all things. “The sky is falling!” Little would holler over and over.

‘Course, there’s always a chance that Chicken Little might turn out to be right.

In TNT’s sci-fi series Falling Skies, it does look as though the end of the world—or at least the end of the world as we know it—was pretty close to a reality. Nasty aliens invaded, slaughtered most of us earthlings and were in the midst of mop-up operations, hunting down the last remnants of humanity and pilfering children.

The Cost of Victory

But we humans are a feisty lot. Thanks to a little derring-do, a touch of alien help and a lot of sacrifice, humanity has fought back and seems on the brink of reclaiming what’s left of the world from its alien invaders. But the toll has been high—physically, emotionally, perhaps even spiritually. And while viewers know that the cost of losing the war would’ve been unthinkable, Falling Skies also asks in its reportedly final season, What’s the cost of winning it?

As the resistance goes on, the battlefield grows more complex. Another alien race is working shoulder to shoulder with us. And sometimes it seems as though we humans fight among ourselves as much as we do with the enemy. No one, it seems, is safe—and no one’s absolutely positive about what new challenges might wait around the corner.

“In the last two years I’ve been kidnapped, tortured, shot, implanted with an eye worm,” said Tom Mason, the show’s prime human hero, a few seasons ago. “Last week I was almost torn apart … and contaminated by a nuclear reactor. I think we can count on something happening. Don’t you?”

In the midst of all that carnage, Falling Skies still manages to seem more interested in picking up pieces than in breaking them. “The setting is very dark and gritty, but the wonderful thing about this show is that the tone is very uplifting and inspiring,” Drew Roy, who plays Hal Mason (Tom’s son), told nbcnewyork.com. “It’s people at their worst trying to come together, all from different backgrounds, and having to focus on one thing.”

Falling Skies is also a little cleaner than some of the other freak-fare we’ve seen lately. The aliens aren’t pretty (though they might beg to differ). And they have these weird harness-like things they plaster on the spines of captured children that remind me of the “face huggers” from the Alien movies. There’s blood. And guts. But we don’t see the same kind of fawning fascination with gore that’s evident on, say, The Walking Dead.

The show also has issues with foul language that seem to have gotten progressively worse, but some secular reviewers have actually called Falling Skies a “family show.” I wouldn’t go that far. It skitters (as it were) over the line a few too many times to deserve that kind of compliment.

After cutting off alien power from a base on the moon, Tom finds himself in a dream world talking with his dead former wife who, drawing analogies from her own battle with breast cancer, encourages Tom to hammer the reeling aliens with both barrels and to find his “warrior.” Tom unleashes his inner warrior by battling a flying alien, pummeling it to death and then ripping off its head to display to the folks back home. Hunting parties split up, gunning down and blowing up aliens, mainly the crab-like Skitters. (One group of Skitters, uncontrolled by their Overlords, ravenously attack each other.)

Two people die: One bears a gory flesh wound on his shoulder, while the other is apparently ripped apart by two hungry Skitters. (We see her hunting partner get splashed with blood.) Tom shoots an alien several times without mercy. Anne, Tom’s second wife, also kills an alien—but she tries to do so with compassion, telling it to “let go” after stabbing it in the throat. Two of Tom’s sons, Hal and Ben, continue to vie for the affections of a woman named Maggie. (Maggie says she loves Hal, but has feelings for Ben, too.) Characters say the s-word once, “d–n” three times, “h—” five times and “b–tard” once. God’s name is misused once, as is Jesus’ name.

Anne holds an Espheni overlord captive. Her daughter, Lexi, encourages her to free him. (We later learn that the overlord is partly Lexi’s father.) Tom is captured by turncoat humans, and Captain Weaver and Tom’s son Matt stalk the evildoers to rescue him.

Matt wants to punish the people who captured his dad. Weaver cautions him to not let anger control him. “If you let that hate destroy who you are, then we lost everything,” he says. And when Matt tries to shoot the kidnappers, he discovers he can’t. Meanwhile, Anne beats her captive overlord viciously, but the abuse causes Ben (who’s psychically linked to the Espheni) great pain. We see blood run out of his nose, and bruises and welts rise on his stomach. Two people get shot, and others get shot at. Tom’s captors punch him twice, drawing blood. Tom headbutts someone. Lexi gets angry at her mother, nearly strangling her. (She has strange powers, presumably thanks to her Espheni dad.)

A feverish Lexi appears to languish in bed naked (she’s covered except for her shoulders). People drink bourbon around a campfire. We hear about a chilling act of betrayal. Characters say “d–n” three or four times; “a–” “b–ch” and “h—” once each. A Mormon farm is mentioned, and someone snidely says, “The Lord works in mysterious ways.”

A firefight ensues when guards are attacked by fellow humans (who are worried that the crew in Charleston has sold out to the aliens). “I think the only good alien is a dead alien,” says one aggressor. People are wounded and killed. A woman is hit with a bullet … and a piece of rebar when she falls. (We see the metal rod sticking through her head.) Not quite dead yet, she suggests that she be put down, like a dog.

Dr. Glass worries that her baby (that she had with Tom) isn’t human as the settlement prepares to beat off another attack. When Captain Weaver’s daughter asks how he can be so calm and even optimistic, he says, “If I’m optimistic, it’s because I’ve got something worth dying for,” hugging her close.

When a woman finds a spot outside to relieve herself, preadolescent Matt Mason tries to watch. “She’s old enough to be your grandmother,” Pope scolds. The woman, however, tells Pope to give the kid a break. “It’s probably the most exciting thing he’s ever seen,” she says. Pope compliments Matt on his thieving.

Ben and Jimmy hunt skitters, shooting them, stabbing them in the throat and immolating them … until one red-eyed alien evades their attacks, impales Jimmy on a tree branch (we see lots of blood, only partly obscured by the dark evening) and works some weird telepathy on Ben via the alien-implanted spikes on his back. Jimmy eventually dies and Ben remains a part of the group—but are the aliens using him? Seems so.

Meanwhile, Tom and Pope have several big conflicts—the last of which leaves Pope beaten and bloody. The crew heads for Charleston, S.C., where they hear that a more organized resistance is forming. Fighters show gumption, heart and skill in this episode, and Captain Weaver laments the fact that kids like Jimmy and Ben have to grow up so quickly in this horrific world. One character is buried underneath a cross.

The resistance carts in a captured skitter, hoping to communicate with it. One doctor would rather dissect the thing than talk to it. But at this point it seems that cooler heads will (might?) prevail. Meanwhile, Tom is attacked by a skitter who is leading a band of weapon-wielding children.

A skitter is shot with a handgun and shotgun, dying from the latter. Another alien is knocked out when someone sticks a gun in its mouth. Several skitters are blown up while sleeping. A human fighter is shot in the leg. (We see the bloody wound.) Removing a “harness” from a boy leaves bloody protrusions on his spine.

A human rebel (who wears what appear to be skitter claws around his neck as trophies) makes off-color sexual and borderline racist remarks. Characters say “h‑‑‑,” “d‑‑n,” “p‑‑‑” and “b‑‑ch.” They misuse God’s name.

In the midst of all that, Lourdes’ faith is a big focus, and she prays frequently. She whispers a prayer for missing children and, when someone asks incredulously whether she thinks it’s helping, she says, “It helps me.” As resistance members gather for dinner, she leads several in prayer. “I still think we can appreciate what we have in our life,” she says. “Even now.”