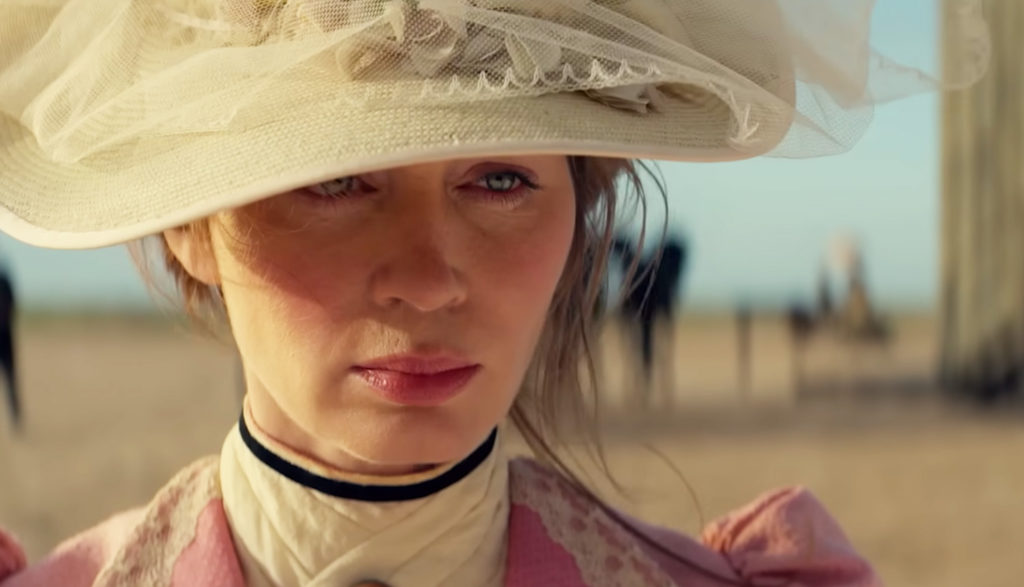 In 1890, the United States is still a place of wide-open spaces, a land of boundless promise.

And a good chunk of that land promises to be deadly.

Lady Cornelia Locke knows how deadly it can be. Just two weeks into her stateside sojourn, she’s seen plenty of death. Why, she might’ve been killed herself had it not been for the timely help of Eli Whipp, a Pawnee-turned-cavalry soldier who’s now looking for a little land and a little peace.

But while the English lady and this rough-hewn frontiersman would seem to have as much in common as a baby rattle and a rattlesnake, they’re sharing the road for now. Miss Locke, see, has some killing of her own to do. And with Eli’s help, she means to do it.

Cornelia is out for revenge, plain and simple. She came to the U.S. to kill the man she blames for the death of her son.

But to get to him, Cornelia will have to travel from High Plains, Kansas (a “town” consisting of one decrepit hotel in the middle of nowhere) to somewhere in Wyoming—a month’s ride or more. And given that Cornelia is accustomed to petticoats and tea time, not buckskin and rabbit stew, it’s almost assuredly “more.” Indeed, the likelihood of her making it at all seem quite slim.

But Eli helps her odds a bit. He’s done more than his fair share of killing, and he’s got a soft spot for Cornelia. (And the fact that she’s carrying a trunk full of money might not hurt, either.)

Together, they’ll ride through the Wild West, meeting some old friends of Eli and plenty of folks who want to rob them, kill them or both. And before they’re through, they just might find that their fates are more tightly linked than they would’ve ever guessed.

The Muck of Eli

“Can you shoot?” Eli asks Cornelia in the opening episode.

“If I have to,” Cornelia says.

And so she does. The English woman seems determined to wipe out most of the fledgling country’s Western population, one ruffian and cutthroat at a time. That makes Prime Video’s The English an incredibly brutal, gory affair.

Like many a Western, though, The English has more on its mind than just scallywags and scalps. Prime Video calls the show a “uniquely compelling parable on race, power and love.” It also stars and is executive produced by Emily Blunt, giving the drama a certain prestige sheen. How prestigious? Two A-list actors are killed off in the first episode.

But there’s that mention of killing again. No one dies of natural causes in this version of the Old West, and The English seems to take a certain pleasure in serving up new, creative ways to terminate its characters. (Animals aren’t immune from the slaughter, either.) Our heroes are often as ruthless as the villains. Due process? The only thing coming due here is a quick trip to Boot Hill.

The English has other rather predictable issues as well. Sex becomes a motivator. And sexual assault is sometimes as part of the plot. Language can be rough, and people can quaff entirely too much alcohol.

But this Western comes with a more unexpected wrinkle, too. Both Eli and Cornelia are big believers in “magic,” in Cornelia’s words. Eli carries a bag filled with traditional “medicine” and totems. Cornelia wears a locket of her son’s hair as not just a memento, but a talisman. She says in the opening narrative that both she and Eli believe in “the stars,” and she insists that their meeting was not chance, but fate—as if the stars meant for it to happen. (If she acknowledges a force beyond those stars, she’s not mentioned it in the show’s early going.)

The English is a stylish, if not particularly substantive, show. But just like this version of the Old West in which Cornelia finds herself in, The English is often a careless, brutal place.

After a bloody stint as a U.S. Cavalry scout, Eli Whipp leaves the Army in search of a homestead in Nebraska. He’s cautioned that being allowed to settle as an American citizen may be just a pipe dream for the native Pawnee. “Out here, you’re one of them,” he’s told. And when he dares walk into a hotel and asks for a drink, Eli’s shown just what the country’s new settlers think of him. Meanwhile, Cornelia arrives at that same hotel—and is promptly punched in the face by the proprietor. Both, it seems, are in line to be murdered. Unless, of course, fate intervenes.

In a flashback of sorts, a cavalry sharpshooter guns down a wanted Native American. The victim’s head is blown clean off, leaving the lifeless body with a bloody stump at the neck. (Another soldier fires bullets into the corpse.) The shooter expresses regret; he’d wanted to pluck the man’s eyeballs out (as the dead man had done to one of the shooter’s friends), to which another soldier suggests using the eyes of the dead man’s wife and/or daughter instead. (Eli intervenes before the women can be harmed.)

At the hotel, Eli’s tied up and bloodied. Cordelia tries to buy the man’s release before she’s punched and knocked unconscious. She’s later forced to eat dinner with her assailant—nose still bleeding—and the man insinuates that he used to rough up his wife, too. (He no longer has one—a statement that is left ominously hanging.) He makes it clear that he plans to rape Cordelia before killing her.

Three men and a horse die in a shootout. One man commits suicide after being fatally wounded. (We don’t see him take his own life, but do hear the report of the gun.) Someone drowns in a bucket of water. Eli talks about the countless people he’s seen killed (and insinuates he’s done plenty of killing himself). A man is stabbed in the back and then has his throat slit (the latter off-camera). The skeleton of a bird lies in the dust. Cordelia apparently shoots a pig.

Eli Whipp mentions that he received his English name from a Baptist, because he was “good with rope”. Cordelia talk about magic and fate and horoscope constellations.

We hear two uses of the f-word, three of the s-word and a variety of other profanities, including “b—ch,” “h—” and “bloody.” We also hear frequent offensive variations of the word “Indian.” Two people sloppily eat “prairie oysters,” aka bull testicles.