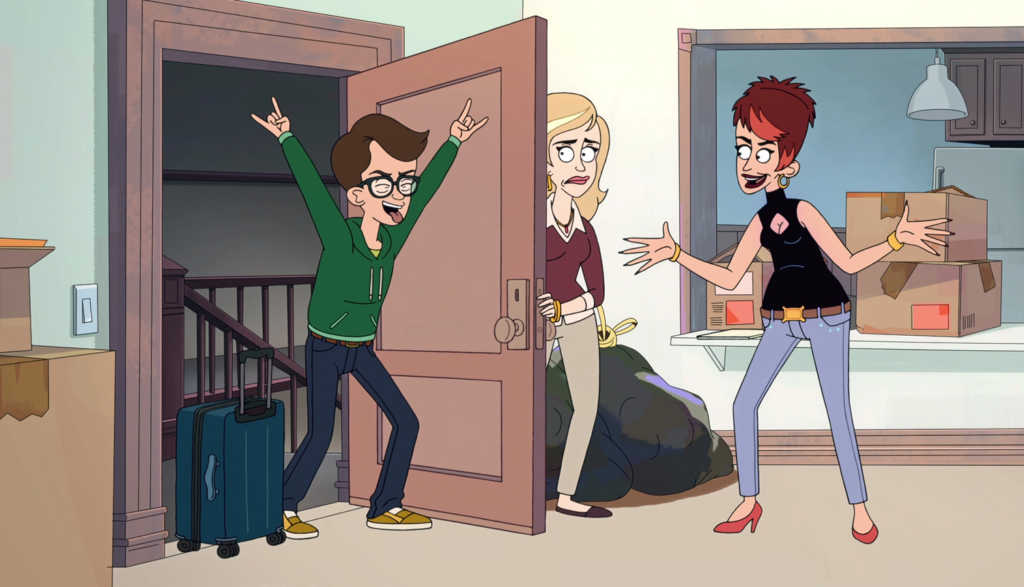 Aunt Diane is a lot like Chicago: gritty, brash and unapologetic. Her sister, Bonnie, puts it this way: Diane’s stuck reliving a party that has been over for 20 years.

Indeed, Diane struts her way through life with a beer can in hand, worshiping her beloved Cubs and calling it like she sees it.

Besides all things Chicago, she also loves her gay nephew, Daniel, more than anything. So she’s thrilled when he comes to live with her for a gap year between high school and college.

They have some good times together … blatantly ignoring all the rules, of course.

Aunt Diane isn’t afraid to say all sorts of vulgar things about any minor inconvenience or person who irritates her. And that includes friends and family members. Profanity flows nearly nonstop throughout this animated show. And I as I suggested above, drinking heavily seems to be Aunt Diane’s primary “hobby.” Inappropriate references to sex and cartoon nudity also appear.

Diane lies and acts selfishly in almost every situation. The only redemptive content of note is the fact that she genuinely loves her nephew and would say that she wants the best for him (and for her son, too).

Still, it’s painfully honest to any mature viewer how this crazy aunt negatively influences her young adult nephew and points him in the wrong direction. Most of her other relationships are twisted and unhealthy, too, and the juvenile jokes here frequently made me flinch rather than laugh.

In the premiere episode of this TV-MA animated Netflix series, Aunt Diane has a no-good day. First, her husband dumps her, bringing her second marriage to the man to an end. Then, the hair salon where she works seems to be leaving her behind, too. Finally, Diane’s sister (who’s her landlord as well) kicks her out of the apartment where she lives. Diane decides that when “live gives you lemons, you make Mike’s Hard Lemonade and throws a party to cheer up her nephew. Diane’s sister is so glad that her gay son, Daniel, is happy for once that she forgoes selling the apartment and agrees to let him live with his crazy Aunt Diane.

Along the way, the f-word is used six times, the s-word seven. Other vulgarities include “a–” and “b–ch.” We also hear crude terms for the male anatomy and female anatomy, as well as references to bodily functions. Someone is called a “whore.”

Diane jokes about prohibition and illegal drinking. Intense partying is glorified, and people are shown throwing up and hungover. Aunt Diane’s husband mentions that she drank whole bottle of brandy in one night. She gets several kegs for their party, where she also smokes. Smoking, steroids, and heroin smuggling are also discussed.

Oral sex is mentioned twice, among other rapid fire sex jokes. Aunt Diane gives her gay nephew a flask with a cartoon picture of a man who becomes fully nude when the flask is tipped back, and this is shown onscreen. The titular character also mentions getting “pregnant and unpregnant” in one week. She mentions also having had three bachelorette parties thrown for her. Daniel worries about hearing his sexually active college roommate’s activities in that area.

Aunt Diane casually references “God’s green Earth” and also exclaims, “God bless you two!” She talks about Chicago burning down. Cartoon guns are shown. A joke is made about Obama and affirmative action. Diane speaks negatively about people with steady jobs and traditional lives.