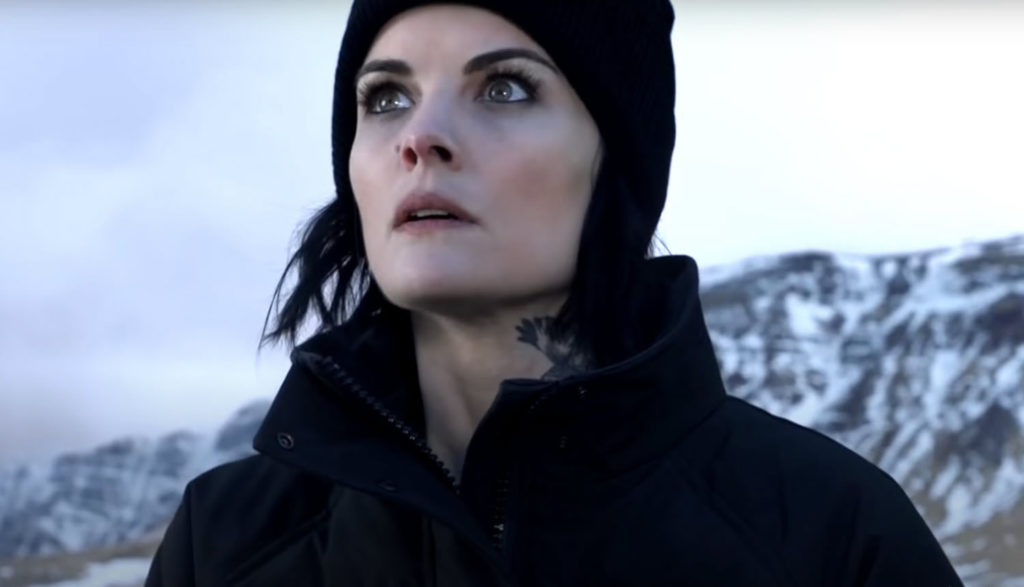 Most of us keep the essence of ourselves locked inside our minds. That’s where we hold our memories and emotions, our thoughts and feelings. We keep records of whether we like broccoli or not, whether we have a soft spot for ’80s hair bands or Kanye West. And while some of our personality may show up outside our noggins—how we dress, how we walk, whether we sport a Mohawk or not—most of who we are, really, is hidden from sight.

For Jane Doe, it was just the opposite.

Found naked in the middle of Times Square, Jane had few memories of who or what she was. And even as her memories come back—as Jane discovers that she was born Alice Kruger and became a lethal South American operative called Remi Briggs—that doesn’t make it any easier to adjust to the new, frightening realities of who she is and what she’s done. Alice was innocent. Remi was a killer. Jane is … who?

Perhaps it doesn’t matter so much now. She was found by FBI agent Kurt Weller—the guy in charge of Jane’s case (and whose name is mysteriously tattooed on Jane’s back, among many, many other clues to her past life). This do-gooding FBI agent has helped give her a new life and a new identity. Indeed, the two got hitched in Season 3. Now she, Kurt and a bevy of other allies are trying to clean up the world, one terrible person at a time.

Even if she was once a pretty terrible person herself.

Blindspot (which closed the book on its five-season run in the summer of 2020) is, essentially, a crime procedural. But it has a bit of a conspiratorial twist to it, which makes it more interesting than your typical CSI clone. Jaimie Alexander makes for a pretty riveting Jane Doe, convincingly blending frightened confusion, naked aggression and a desire to do what’s right.

“We’re defined by our choices,” a doctor tells Jane. “You just don’t remember which ones you’ve made.” She’s free, then, to rediscover the person she was or re-create herself in a different, perhaps better image. That’s a timely message for all of us, really, given that we’re all defined by our choices. And there’s also a nugget of spirituality hiding in there, too: Jane’s been given the same clean slate that Christians are granted through God’s grace. We’re new people, Jane and us. We’re given a new, hopefully better, life.

But despite those promising elements, NBC did not deign to make Blindspot a new, better show. Indeed, the procedural has many of the same old problems common among crime procedurals—plus a few more to boot.

As mentioned, the first seasons were predicated on Jane’s tattooed body, and as such we often see a lot of it. Almost all of it. She, Kurt and other FBI agents fight soon-to-be-felons pretty frequently, too. Fists, feet and bullets fly, leading to bloody injuries and death. And like practically every show on television these days, Blindspot turns a deaf ear to profanities.

In the 100th and last episode of the series, Jane’s team has been officially disbanded. But the team has one loose end to tie up first: Ivy, the latest of the show’s legion of Big Bads, hopes to detonate a bomb filled with “zip,” the same substance that erased Jane’s memory in the first place. It’s a race against the clock, as usual. But for Jane, who was given yet another dose of zip, she’s also racing to diffuse the bomb before the drug inside her system kills her.

The episode is filled with long-dead characters (who show up as Jane’s surprisingly chatty hallucinations) and, in some cases, alternate codas. In one such string of hallucinations, Jane stumbles into a bevy of weddings between characters, including one between two females (both of whom have been in heterosexual relationships previously). We see two gay characters kiss. We see a flashback to when Jane first crawled out of a duffel bag, naked, in Times Square.

Jane and Weller also kiss a handful of times, contemplating a quieter life together. (An ending suggests that they became dedicated foster parents.) Jane fights with several villains in a church steeple—hitting, kicking and knocking several of them out. One man has his sleeve catch fire, while Jane throws another out a stained glass window to his death. (We see the man’s body and a growing puddle of blood.) A hallucinated doctor fades away before Jane’s eyes—but his skin vanishes before his organs and bones do. Jane’s nose bleeds at times.

Jane argues with her hallucinations, and herself, over the nature of good and evil. (One hallucination suggests it’s merely a matter of perspective.) Characters drink wine during a large dinner. They also say “h—” and misuse God’s name a couple of times.

Despite their lack of FBI support, Jane, Kurt and the crew are still trying to stop the mysterious Madeline from her ongoing quest to upend the world. But to find out what Madeline’s planning next, Agent Tasha Zapata must recall her first day at the FBI—a painful memory, given that it’s also when she met her now-dead partner and lover, Edgar Reade. Meanwhile, Jane learns that Kurt’s 4-year-old daughter is in the hospital. But she doesn’t feel it’s wise to tell her husband for fear that he’d run to be with her and blow his cover.

A largish shootout in a warehouse leads to the death or injury of several faceless lackeys. Another person gets shot and perhaps killed during another shootout (shown in flashback). We hear that a poisonous gas (which computer expert Rich labels “Deathgas 2000”) is to be distributed in key locations around the world. People get punched and are knocked out. A man is kidnapped and carried, unconscious, to a waiting vehicle. Someone is shot in the abdomen, and blood seeps from the wound.

We learn that Zapata is pregnant with Reade’s baby. Rich tells Zapata that if she needs some comfort, he’s there for her—awkwardly (and perhaps accidentally) using an acronym that references a very bad word and a very intimate action. We hear a couple of other mild references to intimacy. Kurt and Jane kiss, as do Zapata and Reed (in flashback). Characters say “a–,” “d–n,” “h—” and “p-ss,” and they misuse God’s name twice.

Jane is suffering from deep, paralyzing anxiety as she tries to come to grips with who she once was—and perhaps who she still is. She visits Robert Borden (an ex-FBI psychologist with a complicated history and a great deal of familiarity with Jane), a man who’s currently in prison. Meanwhile, Kurt and the rest of Jane’s FBI cohorts chase after Madeline. She’s the head of a company called HCI Global, and she has a myriad of nefarious—and quite illegal—plans. But as they try to suss out Madeline’s location, she begins killing off her own employees to ensure her escape.

We see one of them strangled to death with a wire, which leaves a dark red mark around the victim’s throat. Crime-scene photos depict other victims: One was apparently tortured before dying, and we see that his hands are bloodied—and apparently missing fingernails. Another victim is splayed out on the top of a bus, seemingly pushed out of a window. Several other corpses are briefly seen as well.

Several people are shot and apparently killed. Someone fires at FBI agents with a high-powered weapon. Jane fights with a couple of evildoers, and we hear what sounds like a bone cracking during the melee. In flashback, Jane recalls a memory about being in Afghanistan; it involves explosions that kill at least one woman (and likely several others, too). Someone’s stabbed with a syringe, falls unconscious and gets dragged from the scene.

Gord, a crime lord turned computer expert for the FBI, is gay. He works with his former lover, Boston, on the case. We hear the two banter and fight a great deal, though Gord expresses deep affection for Boston when he’s not around. Gord also makes reference to a “game” that seems to be crudely sexual.

Madeline drinks a glass of wine. Characters say “a–,” “h—“ and misuse God’s name once.

Jane is discovered in a large duffel bag in Times Square. She climbs out of it, limb-by-lithe-limb, and reveals herself to be utterly naked, covered only by tattoos. (Viewers are shown her bare chest via a rapidly retreating camera; her breasts camouflaged only by tattoos and her groin obscured by a part of her leg.) Once she has clothes again, Jane disrobes repeatedly to further the investigation of her ink. (Her breasts, in these cases, are typically covered, at least partly, by her hands and arms.) Her backside is fully exposed.

Jane tangles with two assailants: They kick and hit; bodies are thrown into walls and breaking windows. She nearly kills one of them, choking him with part of a mop handle. Kurt also fights with an assailant, who wields a knife. A man is shot in the shoulder and is later killed (offscreen) in a hospital. Jane suffers a bullet injury on her arm. A criminal falls through a floor (thanks to some explosive charges set by the FBI) and breaks his leg. (Kurt threatens to break more than just that.) Women are shown chained to radiators or pieces of furniture.
An obviously beaten woman cowers before her husband, who yanks her hair. A crying baby seems to have an abrasion on his or her side. An explosion rocks a subway tunnel.