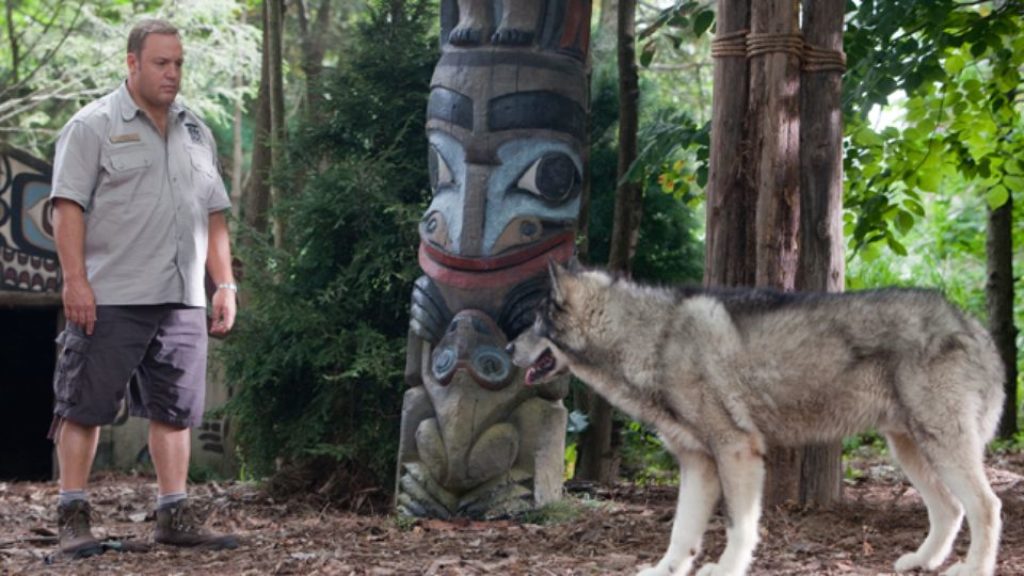 Griffin knows better than anyone that he has a bear of a job.

Not that it’s that different from what we all deal with in our workaday worlds. His workmates, after all, spend their days loitering at the local watering hole or preening for passersby. They hoot or growl over every little thing. They’re rude and demanding, flighty, loud and hardly ever tidy up their areas. Griffin isn’t so much a supervisor as he is a bipedal concierge/nursemaid, and he never has the freedom to ignore the elephant in the room.

He must feel, at times, like a Plugged In editor.

You won’t hear Griffin complain, though. He digs his companions, and they like him pretty well, too. Frankly, it’s like he was born to be a zookeeper. So why scrap a good thing?

One word: Stephanie. If there’s anything Griffin likes more than giving a chimpanzee a good shampoo, it’s his former main squeeze. Five years ago, Griffin asked Stephanie to be his mate for life, but she turned him down flat, believing Griffin could be ever so much more than a mere zookeeper. Now, like a migrating African swallow, she’s back again—batting her eyes and flipping her hair and sending out all sorts of signals that she’s ready to launch into another complicated courtship dance.

But Griffin feels like he will have to leave the zoo to capitalize on his chance. And the very idea of that makes his charges go wild with anxiety. Well, as wild as they can, sequestered as they are in a major metropolitan zoo. And failing to save the day by arranging for Griffin to save the day—and thus impressing the stubborn Stephanie—they resort to … a bit of old-fashioned chitchat.

You know, give him a pep talk. Over coffee and humongous meat bones or something. This guy needs help in the love department, they figure. And who better to give it than a bunch of wild beasts.

Griffin is a likeable guy who, for much of the movie, goes above and beyond for his furry and feathered friends. He saves the zoo’s lioness by reaching in her slimy maw to retrieve an aluminum can. He walks a monkey over to a section of the enclosure that has a bit more shade. He spends a great deal of time trying to help Bernie, a morose gorilla, climb out of his funk. He’s a great zookeeper, so it’s not too surprising that the zoo’s animals want to do right by him. They care about Griffin so much, in fact, that they’re willing to break one of their (ahem) cardinal rules—that is, to not talk with people—to help him out.

What they say is, of course, a mess. But still, we should give them a scratch behind the ear for effort.

Griffin—in spite of the animals’ help—comes to see how important it is to stay true to yourself, and how neat it is to make good friends along the way.

Stephanie asks Griffin whether it’s bad feng shui to have a television in the living room. Then she appears to answer her own question by saying that the yoga she does in the room (with help from the television) surely counterbalances any negative energy.

Griffin’s animals might not know very much about human relationships, but they do display a deep understanding of how to attract a mate. Bears, for instance, tell Griffin how important it is to walk around with one’s crotch (referred to several times as a “pudding cup”) thrust forward. “Show ’em the goods!” they say. A wolf advocates turning every date into a “home game” by marking territory with urine. A monkey tells Griffin that the best way to woo a woman is by flinging excrement at her. The lion offers the sort of advice that bad-boy humans have been taking for years: Insult the girl, then compliment her, then insult her some more.

Griffin uses all of these techniques—particularly the whole insult-compliment deal—and lo and behold, they work. Stephanie swoons and, before the film is out, the two are apparently living with each other. (The animals never suggest saying “I do.”)

Women sometimes dress up in cleavage-revealing getups and dance suggestively. Couples kiss. A gorilla dances with and is seen flirting with women at T.G.I. Friday’s. A joke is made of Griffin reaching into another man’s pants pockets to retrieve a set of keys. That man tries to plant a kiss on an unreceptive female co-worker. A bear brags about how his own paramour has an extra claw “and she knows how to use it.” Someone makes a crass reference to breasts.

Love hurts, they say, and that’s particularly true in Griffin’s case. When he renews his acquaintance with Stephanie, he’s holding a porcupine—that shoots a couple of quills into his face. He painfully pulls them out. Then, when a lion “gets loose” in the zoo and appears to threaten Stephanie, Griffin tries to jump across a moat to save her—and instead slams into the rock wall and falls several feet to the ground below. He smacks his head against a metal bar, falls off a gorilla swing and drops from a bridge’s towering lattice to the street below.

Griffin inflicts his share of injuries, too. After hearing that Bernie’s suffered abuse at the hands of a fellow zoo worker (often shown brandishing a nail-tipped stick and pepper spray), he goes to the man’s house and kicks him in the chest. He smashes an ice sculpture and causes someone to fall down hard. He tries to ride an ostrich, nearly crushing it. (Outtakes show the ostrich to be fake.)

There’s talk of the gorilla “beating you to death with your own arm.” Bears fight with one another. A gorilla drops from a bridge and lands heavily on a car, severely denting it. Griffin and a co-worker have so much destructive fun at a wedding reception that they jokingly mull making a career out of it; Griffin further suggests they knock off a convenience store. (They don’t.)

A wolf advises Griffin to urinate on trees to mark his territory, then demands that Griffin try it in the wolf’s own enclosure. He does—just as two other zoo workers come walking by. “It’s going to be way hard to unsee that,” one of them says. Griffin lies, telling her that the wolf had gotten stung by something and he was urinating on it to counteract the poison. The woman then makes Griffin finish the job (unseen by moviegoers). Later, Griffin also urinates in a potted plant at a fancy reception.

An unconscious lion is wheeled into the zoo’s medical facility, her airway obstructed by something, and zoo personnel splatter lion saliva everywhere in their efforts to dislodge it. One bear suggests to another that he’s been defecating in the drinking water. “You said that was vitamin drops!” the other bear exclaims. There’s a reference to a “hot stinking pile,” accompanied by a great deal of talk about urination, defecation and boogers. A wolf is caught licking his private parts. “I certainly wasn’t cleaning my basement,” he says. Griffin splits his pants.

Technically, Zookeeper doesn’t maul its PG rating—though in this case the abbreviation might stand for “Pretty Gross.” Its slapstick violence and crass humor is stuff that wouldn’t shock the censors, and might be the stuff that 7-year-olds guiltily giggle about at the lunch table—the cinematic equivalent of milk shooting out of someone’s nose.

But just as adults shouldn’t encourage their little ones to turn milk-spewing into a sport, neither should they let these animals loose on their pride. This summertime slip-up of a flick, which carries the brand of Adam Sandler’s Happy Madison Productions (Sandler himself voices the astoundingly annoying Donald the Monkey), is a kids’ movie only in the sense that it’s childish and juvenile. And it’s only a comedy in the sense that it’s kinda funny that anyone thought this was a good idea for a movie.

I walked into Zookeeper as an animal lover—the sort of guy who still cries during Bambi and who dutifully removes spiders from my house with a glass and hearty good wishes.

I walked out of Zookeeper wishing that Griffin’s zoo was open to hunters. Or, at the very least, that someone would come in and make all those animals shut their yaps.