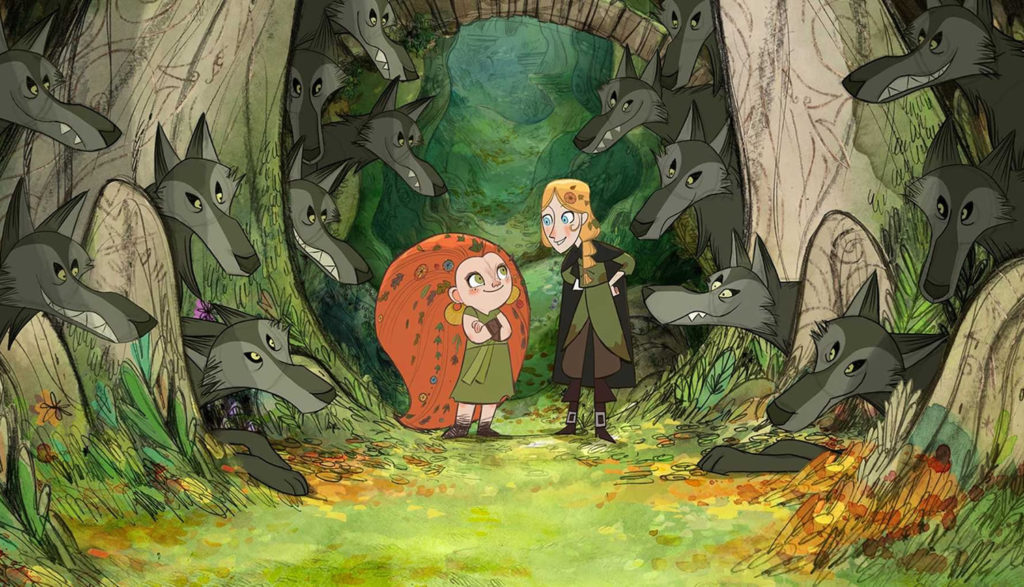 In fairy tales, wolves are never the good guys.

They eat grandmas. They blow houses down. They dress up as sheep to eat more sheep. All this bad press stems from some very real fears: Centuries ago, wolves were an honest (if exaggerated) threat to farmers, ranchers and travelers. The forest in which those wolves lived was a dark, confusing, uncivilized place where people—sometimes children—could, and did, disappear without a trace.

But if wolves could write fairy tales, who’d be their big, bad bogeymen? Well, men, of course. It’s the men who chop down their forests, steal their dinners, kill their relatives and hang their pelts on walls.

In 17th-century Ireland, near a city called Kilkenny, men and wolves are at war. Each day, a bit more of the surrounding forest disappears. Each night, the villagers count their (literal) sheep, say their prayers and keep a sharp eye out for attacking beasts. No, not beasts—not ordinary wolves, but monsters. They’re too smart, too strong to be mere animals. A few shepherds insist they’re led by wolfwalkers—part human, part wolf, who can control these canines. One even claims to have seen one.

Such is the world that Bill Goodfellowe and his young daughter, Robyn, move into.

They’re English, not Irish—a mark against them in this land torn by strife and civil war. But Bill Goodfellowe is said to be a great wolf hunter, and the Lord Protector wants the woods cleared of wolves ASAP. “We must show [the people] that the wolves are no threat,” the Lord Protector says. “They’re just beasts. Finish them.”

If Goodfellowe can do his job, he and Robyn may find home and happiness in Ireland. Robyn knows her father’s up to the task: He’s the best wolf hunter in the whole wide world.

But deep in the forest lurks another little girl—one with wild hair and a howl in her throat. At night, when she falls asleep, she becomes a wolf—seeing with her nose, bounding through the secret forest with her brothers and sisters.

And when Robyn accidentally shoots her own pet falcon in the wing, this strange little girl—Mebh’s her name—snatches it away and disappears through the trees.

But Robyn’s not one to leave the falcon to an uncertain fate. The wolf-hunter’s daughter dives into the forest, armed with a tiny crossbow.

No little girl is going to eat her pet—even if she is a wolfwalker.

Robyn and Mebh wind up meeting, and they have far more in common than you might expect. They become fast friends, and Mebh saves not just Robyn’s falcon, but heals a bite that Robyn herself receives. (Wolfwalkers have the power to heal.) And she welcomes this “townie” into the forest and teaches the girl about the ways of her pack.

But Robyn ends up straddling two seemingly disparate worlds: That of the people in Kilkenny and the wilder world of the forest. She knows that the Lord Protector aims to kill the wolves and burn the forest, and she does what she can to help Mebh and the pack. But she loves her father, too.

Robyn’s father loves her right back. “I promised your mother I’d keep you safe,” he tells Robyn, and he does what he can to keep that promise—even to Robyn’s sorrow and exasperation. Even when the two seem to take opposite sides of the struggle, the movie never turns Goodfellowe into a bad fellow—just a confused and sad one.

Mebh’s mother is, shall we say, out of commission for much of the movie. But we know that she and Mebh form a strong mother-daughter bond. And Mebh will stop at nothing to save her.

Near the beginning of the film, we’re told that long before the Lord Protector came to town, St. Patrick himself made a deal with “the old pagans” concerning the nearby forest—a sort of peace treaty, if you will, where the townsfolk would leave the forest alone.

This sets the table for something of a pagan-Christian conflict that the movie leans into. The Lord Protector is a deeply devout,  and angry, Christian. “The wild land must be civilized,” he says in prayer one day. “That is your will.” He sees the forest as a stronghold for evil—and he calls the wolves’ den “the devil’s lair.”

At first, he considers the rumors of wolfwalkers to be “pagan nonsense.” But when he comes face-to-face with one or two of them, he considers them servants of the devil—praying and hurling deeply religious throwdowns as he fights them. (“By God’s glory and punishment, He vanquishes thee!” he shouts during one battle, for instance.)

Mebh—the most experienced wolfwalker we meet here—might not understand the Lord Protector’s talk of paganism. And the condition itself seems to have a naturalistic component: It’s a bit like lycanthropy, where folks bitten by wolfwalkers become wolfwalkers, no matter where they go to church. But certainly there’s a magical, paganistic element to the condition, too. Mebh’s den is covered with carvings that sometimes glow, and at least one suggests an ancient healing ritual.

Goodfellowe and Robyn seem to be at least nominally Christian. Robyn is told by her father and others that “work is prayer.” After a hard day at the scullery, Robyn sighs that she must’ve prayed “the whole Bible.”

Robyn’s bird, Merlyn, is obviously named after the famous wizard of legend. Someone who’s amazed and terrified exclaims, “Sweet Mother divine, save us!”

Humans and wolves fight and frequently injure each other. At least one person dies—falling into the water and rocks below. A cannon fired into the ground explodes, which may lead to other fatalities (though the movie leaves this a bit uncertain). People are bitten by wolves. Wolves (including wolfwalkers) are injured by arrows and cannon fire. Robyn’s bird is injured by an arrow as well. Someone has his chest deeply scratched by wolves, but he’s promptly healed by a nearby wolfwalker.

We should also note that the film includes quite a bit of peril that could frighten or disturb young or especially sensitive viewers.

[Spoiler Warning] We see this especially when Robyn becomes a wolfwalker herself. She transforms into a wolf one night as she sleeps, and her father—who is, of course, a famous wolf-killer who thinks the animal might hurt or kill his daughter—takes after the girl/wolf. It triggers a pretty traumatic chase through Kilkenny, with people firing guns and arrows at her or slashing at her with swords and halberds. It’s not the only frantic chase through town, either. The film treats the hewing down of trees as something of an injury, as well.

But perhaps the biggest terror we see here is the Lord Protector’s use of fire, both against the forest and its wolves. The movie’s flames are blood-red and monstrous in their own right. The wolves, too, can be pretty scary—especially early on in the film.

Mebh threatens at one point to “eat” all the humans of Kilkenny. Bullies torment and assault Robyn and others. People are snatched up by snare traps. A tapestry depicts a knight killing a wolf. Robyn sings a song that glories in the hunting and killing of the wild canines. People storm around with torches and pitchforks.

We hear a couple of misuses of God’s name, along with people uttering “Jesus, Mary and Joseph” as a sort of half-petition, half-expression of exasperation. Mebh tells Robyn that her transformation into a wolf is “flippin’ great!”

Mebh has a wolf’s sense of smell: “You stink,” she tells Robyn, and later says that the town of Kilkenny is filled with “smelly people.”

Mebh steals “town tasties” like bread and potatoes. Robyn makes decisions that, to some, seem like acts of betrayal.

Think Disney, Pixar or Studio Ghibli represent the gold standard for animated movies? Critics might point you instead to Cartoon Saloon.

The studio—which is actually based in Kilkenny, Ireland—has made just three featured films: The Secret of Kells, Song of the Sea and The Breadwinner. Together, the three have an average Rotten Tomatoes rating of about 95%. And each was nominated for an Oscar for Best Animated Feature.

Wolfwalkers is the studio’s fourth feature. Released in the waning days of 2020 on Apple TV+, some believe it might be the year’s animated Oscar front-runner, contending even with Pixar’s mighty Soul.

Artistically and aesthetically, Wolfwalkers wows. But theologically, it has some issues.

The film, directed by Tomm Moore and Ross Stewart, is all traditional hand-drawn animation, and it’s amazing stuff. Kilkenny is all sharp angles and gray. The forest features sweeping, swirling pen lines and subdued, natural colors. And when things turn magical, the screen can take on the beauty and luminance of a stained glass window.

Too bad the film treats Christianity so harshly.

Admittedly, this is partly in character for the movie’s given time period. It’s set around 1650, after Puritan Oliver Cromwell took charge of Britain after a bloody civil war. The original Lord Protector was particularly loathed in Ireland (he did his best to stamp out Ireland’s beloved Catholicism and, it is said, killed or deported a staggering number of Irish civilians) and took his faith to extremes—banning most sports, shutting down theaters and whipping people for going on a walk on Sunday.

To say that Wolfwalkers is “anti-Christian” is, perhaps, a stretch. But the movie does pit its own Lord Protector’s malicious piety against a gentle, wild and wondrous sort of paganism, where its adherents kindly heal others, appreciate a beautiful run through the woods and simply want to be left alone.

But while the movie magnifies Christianity’s own 17th-century shortcomings, it ignores any faults that might be found in its version of “paganism.” And that’s a problem. It’s unlikely that viewers—especially children—would watch Wolfwalkers and declare it a complex and imaginative treatise on the time in which it’s set. Instead, they’d see a hate-filled, wild-eyed Christian trying to kill a bunch of sweet, beautiful wolves.

Wolfwalkers is a piece of art: A moving picture that moves us through its rich visuals, compelling characters and resonant story. But for Christian families, it’s a dark and narratively dangerous forest, too. Best guard your children, lest they be caught unawares.