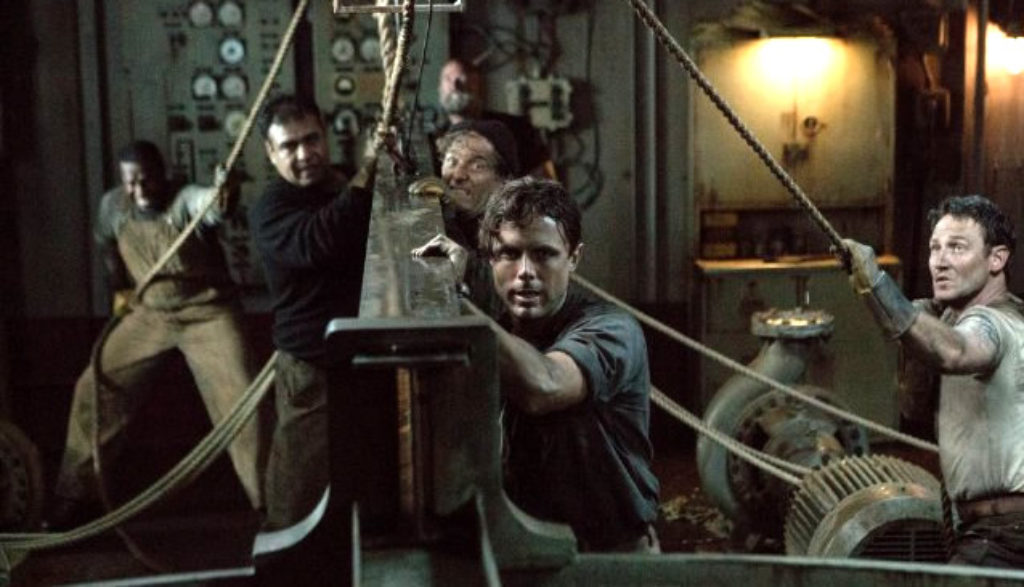 There’s a certain glamor that comes with military service.

Oh, it’s not necessarily glamorous work, mind you. But donning a uniform still sets people apart. Stories are told and movies are made about heroic men and women in the Army and Navy. Marines pride themselves on being the toughest folks around. Air Force pilots zip around in their über-awesome F-15s and B-2s. When I was a kid, I remember commercials that promoted the adventure and honor of military service. They always ended with enthusiastic shouts of “Army! Navy! Air Force! Marines!”

And in some of the commercials, that I saw later, they shouted, almost as an afterthought: “Coast Guard!”

The Coast Guard is the offensive lineman of military service. Its members aren’t sent to exotic, dangerous ports of call. They don’t return home to a phalanx of flag-waving family and friends. By design, they’re already close to home—protecting our shores from not just foreign threats, but domestic and natural ones as well. Maybe it’s not as sexy as flying an F-15. But being “sexy” doesn’t mean a thing when there’s a storm raging and your boat’s about to capsize.

On a dark and stormy night in 1952 near Cape Cod, Mass., the tanker SS Pendleton breaks in two. Half of it burbles to the bottom of the ocean, but the other half—containing 34 crewmen, continues to bob on the surface, pelted by rain and sleet and towering waves. The radio sank with the rest of the ship, and most of the area’s Coast Guard is off attending another broken-in-two tanker. (It was a very bad storm.) It seems as though there can only be a tragic ending to this tale.

The nor’easter buffets the tiny town of Chatham, Mass., covering the roads with snow and stirring the sea to an icy boil. The waves are so horrible that many doubt whether a Coast Guard vessel could even make it into open waters, should a boat need rescuing. Good thing there’s no one in trouble out …

Suddenly, the Chatham Coast Guard station gets a blip on its radar screen. At first it’s deemed an anomaly. But when a citizen reports seeing half a ship off the coast, they know it’s not. It’s the Pendleton—and she needs help. Fast.

Bernie Webber—a soft-spoken, nearly mousy officer, is sent out with a skeleton crew into the dangerous waters. It could be their last trip, they all understand: They could be torn apart by the waves on the bar, swamped and overwhelmed by the mighty forces swirling around them. And there’s no guarantee that anyone aboard the Pendleton is even still alive.

They lose a lot on the rescue mission: sleep, heat, even their compass. But never their resolve.

Not as many movies are made about the Coast Guard as it deserves. And The Finest Hours is loaded with the sort of courage and heroism that makes you want to stand up and cheer. Bernie Webber leads the charge, but the movie suggests he’s an unlikely hero. He may serve as the captain on his tiny rescue boat, but he comes across as a bit subservient. That can be a good quality, too, mind you—but some think he’s a little too meek for the tall task at hand. He proves otherwise, refusing to turn around despite the obvious danger (and the occasional pleas from his crew). “We’ve come too far,” he says. “We’re not giving up on them.”

Miriam, Bernie’s fiancée, refuses to give up on him, either. And even in the ordeal’s darkest moments, she helps manage a makeshift shelter for any who might survive the storm, comforting others in the midst of her own worries.

The survivors on the Pendleton, led by Ray Sybert, do their own part to further the rescue. Despite losing half a ship, Sybert designs a rudder out of spare parts and sends them careening into a sand bar—a last ditch effort to keep the boat above water.

Marriage and “your God” get linked in one comment. We see the text of Psalm 23. Pendleton crewmen pray, with one man belittling the effort. “Hey, don’t get me wrong,” he says. “Praying’s great, but it ain’t everything.” Bernie and Miriam may also pray in times of trouble—serenely closing their eyes during the most perilous situations.

Miriam and Bernie kiss a few times and dance together. Coast Guard personnel look at Bernie askance, given that Miriam asked him to marry her—not typical 1950s behavior. There’s some discussion of Bernie’s good looks.

The Finest Hours is filled with peril, but there are no guns or swords or even fisticuffs in play. The closest we get to an angry confrontation turning violent is when Ray chops free a lifeboat from the damaged craft, making a few crewmembers very unhappy. One of them nearly bashes Ray a couple of times, but when he’s told that the lifeboat smashed to smithereens when it hit the water—proving that Ray really saved their lives—all is at least semi-forgiven.

When the tanker breaks apart, several crew members fly around the ship’s interior, and some get hurt. Men are hurled against walls by raging water or get smacked in the noggin by pieces of the ship. Coast Guard rescuers are flung about their own boat pretty thoroughly, too, and sometimes fall into the deep, briny sea.

We watch one person die during the rescue operation. And it’s assumed that everyone on the other half of the Pendleton—including the captain—died in the accident. We hear about other deaths.

Bernie, Miriam and another couple drink at a bar. Pints of beer sit in front of bar patrons.

The rescue of the Pendleton on Feb. 18, 1952, is one of the most legendary Coast Guard exploits ever. The servicemen all received medals for their heroism. And the real Bernie Webber was an inspiring story away from the ocean, too: He and Miriam actually got married in 1950—about a year-and-a-half before the Pendleton rescue—and they stayed married for nearly 59 years until Webber’s death in 2009.

With that sort of source material to work with, Disney’s The Finest Hours feels like an old-fashioned adventure yarn that wants to inspire as much as thrill. It’s a feel-good story that makes for a pretty good movie—solid if not stellar. And while it’s marred by a bit of bad language, it’s a good deal cleaner than your standard superhero flick or sci-fi adventure. The fact that it’s based on a true story makes it just that much better.