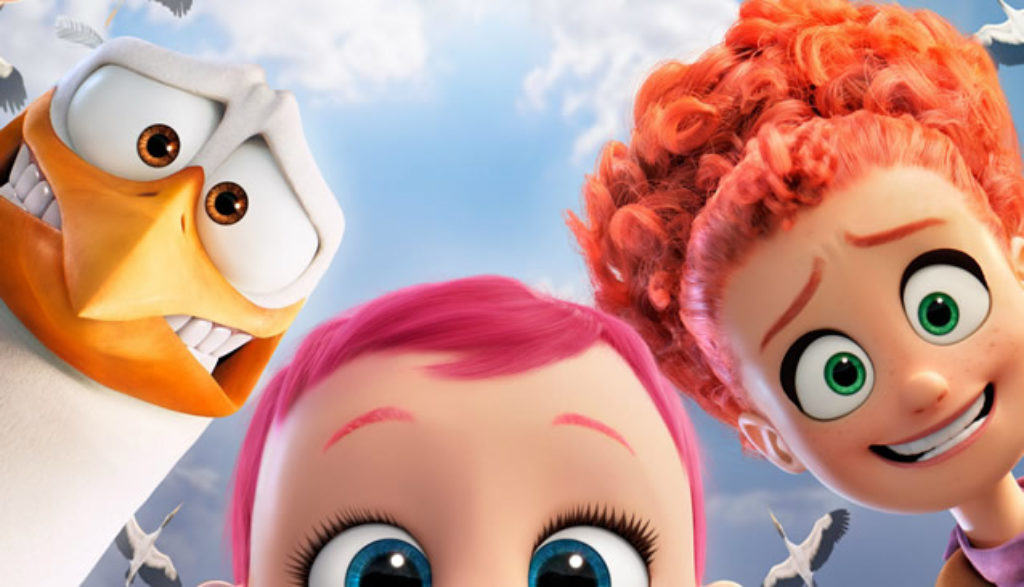 Oh, sure. Storks used to deliver babies, those analog balls of wailing flesh that, despite their lack of functionality and upgradable components, remain surprisingly popular amongst humankind. But let’s face it: There’s not much profit margin in delivering those. I mean, babies are built to last—ripening for as many as 70, 80 years or more under optional conditions. No, technology is where it’s at these days. I mean, you gotta get another phone every few months, right?

So Hunter, boss of Stork Mountain, decided to switch business models. Instead of delivering babies, his storks are now the primary shipping arm of the internet retail giant Cornerstore.com. The storks are like drones, only with more feathers and less need to recharge after short flights. “Always deliver!” remains the motto. They’re just delivering toasters these days, not tots.

Hunter is angling for a corner office at Cornerstore headquarters, and he’s ready to turn over the operation to someone else—a bird named Junior. But the job comes with one condition: Junior has to fire Tulip.

It makes sense from a purely economic point of view. For years, Tulip, the ginger-haired human, has been one of the main reasons why Cornerstore has fallen into (ahem) the red. She means well, but her inventions tend to set the shipping plant on fire.

But to turn around and fire Tulip … that’s pretty harsh. She’s an undelivered package herself, and Stork Mountain is all she’s ever known. So Junior decides to put her in charge of the letter-sorting department—what would’ve been a peach of a post back in the 1950s, perhaps, but not-so-important in the Instagram age. Junior leaves her with a pep talk and asks her what her motto will be from this point forward.

But then, as fate would have it, a letter comes in! A letter from a family asking for a baby boy with “mad ninja skills.” Tulip innocently walks it over to the long-defunct baby factory and fires the thing up.

Junior runs over to stop the cataclysm, but it’s too late. The machine spits out a baby. If Hunter finds out that there’s even one new infant pushed out by the baby factory, Junior’s chances of slipping into the big bird’s big chair will be toast. There’s only one thing to do: Deliver the infant and get back to Stork Mountain before anyone’s the wiser.

But here’s the thing: Junior’s wing is injured. There’s no way he can deliver the problem child on his own. And while Tulip has (as luck would have it) a flying craft stored away in her workroom, she’s not exactly the most reliable pilot herself. No one’s going to be calling her Sully anytime soon.

Seems that if the baby’s going to get to its proper home, Junior and Tulip will have to deliver it together.

Storks is about more than where babies come from: It’s about where families come from—how delicate they are and how wonderful and foundational they can be. And in order to tell this very family-centric story, it gives us two of them.

The Gardner family is where the movie’s pink-haired baby is ultimately supposed to land. Prospective big brother Nate wrote the letter in part because his parents—go-go real estate agents—barely spend time with him these days. He’s lonely: A little brother, he believes, will be just the ticket.

As he begins to transform the family rooftop into a suitable landing pad for a stork-delivered baby, his father breaks away from his latest call to see what’s up. And instead of telling the kid to put away the paint, he finds himself helping. Even though he knows full well that storks don’t deliver babies—not anymore, at any rate—he realizes how fun it is to spend time with his boy and how quickly Nate’s childhood is slipping away. Soon, Nate’s mom is joining in on the fun. It’s heartening to see the Gardners begin to reset their priorities and revel in the joys of just being together.

The second family is comprised of the makeshift clan of Junior, Tulip and the little bundle of joy they’re toting (which Tulip temporarily names Diamond Destiny). Though the delivery adventure itself only takes a couple of days, we see a microcosm of the joys, sorrows and tensions that families naturally face over much longer durations.

Sometimes the conversations Junior and Tulip share mirror difficult real-world situations. “This single package can ruin what I’ve been working for my entire life!” Junior laments, echoing what many a career-minded soul might feel when confronted with an unexpected pregnancy. Later on, Tulip says, “The only good thing that ever came out of this was this baby!” Again, the movie gives voice to the kind of arguments stressed and conflict-riddled families might engage in. That said, Junior and Tulip are determined to stick together and do what’s best for their temporary child, sacrificing their needs and safety again and again for their little charge. Eventually, they realize that they have indeed become something of a family. Not a traditional one, but a family nevertheless.

Throughout these and other situations, we see the strange, domesticating influence that children can have. Selfish beings begin thinking of others. Moms and dads fall head-over-heals in love with these demanding little creatures. Storks is all about the curious power of family, how the love that its members have for each other can be one of the strongest forces in the world.

One other theme of note: Though there’s some talk about Tulip trying to find her “real” family (a desire that eventually hurts Junior’s feelings), you could argue that Storks also gives a positive portrayal of adoption. In this animated world, after all, it’s suggested that children are still conceived and born the “traditional” way, which means that every child delivered via stork is not a biological son or daughter, but an adopted one.

When Nate suggests to his parents that they contact the storks so he can get a baby brother in the house, and then asks where he came from, his parents laugh knowingly and with some embarrassment. Storks don’t deliver babies anymore in part, they say, “because there are so many other ways to get babies.”

In a brief montage of sorts at the end of the movie, we see storks drop babies off to different sorts of families, including some with (apparently) two moms and two dads.

We see, on occasion, some bare animated baby bums. An animated bird drops a towel that had been wrapped around its waist: The camera pixelates the bird’s animated rear.

Diamond Destiny, like many a child, loves slapstick humor and violence. She likes nothing more than watching people hit each other—and the harder the better. As such, she giggles as Tulip thwacks Junior with planks of wood, as wolves beat each other up and during a host of other physically painful hijinx.

The wolves, incidentally, were planning to eat the child (as well as Tulip and Junior), and we hear them describe just how they’re going to consume it before the kid charms their lupine socks off. But as they pursue the child (whom they now hope to raise to be an “independent woman”), the pack winds up crashing into things and falling from great heights.

Storks smash into glass repeatedly. Hunter keeps a bevy of tiny birds at his disposal, which he squeezes, beats and uses as golf balls. A helicopter explodes. Birds apparently fall to their doom (though, given they have wings and we don’t see them hit ground, that fate isn’t altogether certain). A factory is set on fire. A wing gets injured in a bevy of sharp gears. A building falls from a great height. There’s a violent-but-quiet fight (so as not to wake the baby up) between Tulip, Junior and a pack of penguins, during which someone gets stabbed in the chest with a fork. Babies pull feathers and poke at the eyeballs of longsuffering storks.

Several uses of “of my gosh” and “heck,” and one of “jeez.” Someone says, “Suck it, wolves!” We also hear an the incomplete exclamation, “What the …” There are also some moments when indistinct language can sound like harsher profanities.

Junior and others sometimes sniff diapers to determine whether they need to be changed or not. Junior, complaining of internal bleeding, seems to vomit off-camera. He talks about how he urinated on himself during a moment of peril.

Cartoons these days seem to be made as much for adults as children, if not more so. So while kids will laugh at Storks‘ slapstick antics, their parents may be more prone to sniffle a bit. Juxtaposed against the promise and joy of new life, the movie reminds us that these babies eventually grow up. That the time we have with them is fleeting.

Nate goads his parents with such reminders, telling them that he’s only a couple of years from his teens. “Blink and I’ll be in college,” he warns. It’s meant as a joke, and it is funny, but for parents of pint-size children, it may also be a poignant reminder: No matter how much time we’re able to spend with our kids growing up, it never feels like enough.

Given those tender and poignant themes, it’s deeply frustrating to report that this often delightful film concludes with another nettlesome reminder as well: Even in films otherwise chockfull of uplifting, pro-family messages, parents have to stay vigilant to the very end. Shortly before the credits, there’s a montage of babies being delivered to couples of all kinds, including same-gender partners. It’s a blink-and-you’ll-miss-it moment, one so short that it might tempt us to minimize the worldview statement being affirmed there.

But make no mistake: There is a worldview being delivered in that scene right along with those cute and cuddly babies. And even though it’s very much in sync with where mainstream culture is at these days, that message remains decidedly at odds with a biblical understanding of family as God designed it.