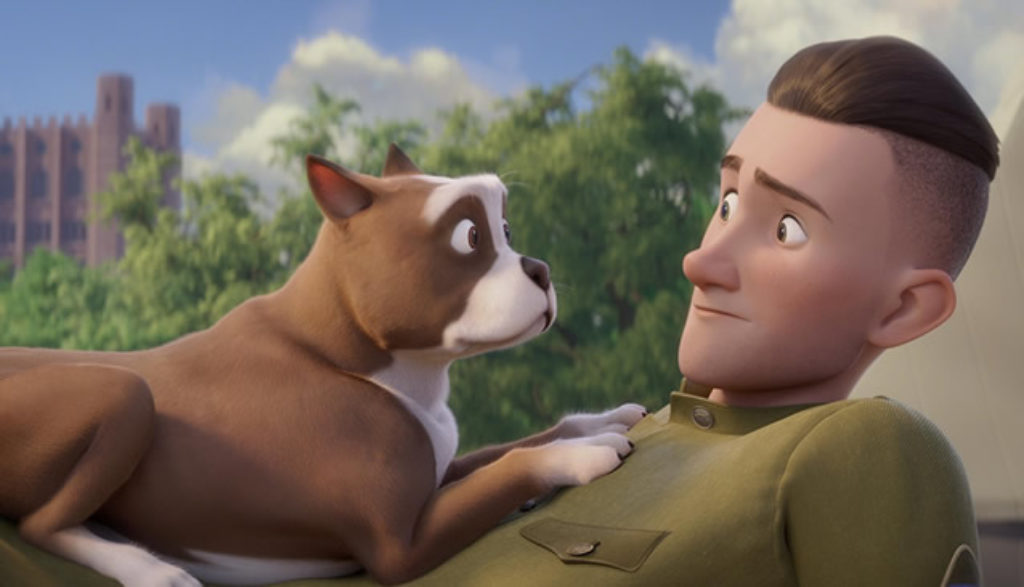 When the world unleashes the dogs of war, it’s nice to have a practical pooch by your side.

It’s not that Stubby wanted to go to war; rare is the dog that is motivated by ideological fervor. He didn’t sign up because of the Army’s steady pay or college tuition program.

It’s 1917, and the United States is prepping to enter World War I (or, since World War II hadn’t been invented yet, simply the “war to end all wars”). The people of New Haven, Connecticut, line the streets to watch some of America’s finest young soldiers march in their Army greens as they make their way to a training base at Yale University.

Stubby—at this point, just a nameless stray scrounging for scraps—never thought about a military career before. But when Pvt. Robert Conroy tosses the dog a cookie, soon-to-be Stubby is sold. He follows Robert and his platoon through the streets and to the base, determined to hang out with his new best friend.

But the Army, even in wartime, has certain standards for its soldiers. The brass likes its men in uniform to be … well, men. They should walk on two feet. Weigh more than 20 pounds. Salute. That sort of thing. The Army wants nothing to do with a stray dog, no matter how cute it is.

Still, Stubby has also the sort of never-say-die attitude that the Army likes. When guards block the dog’s way into camp, the plucky pooch digs under the fence. When a sergeant spots him, Stubby does his best to follow the drills. And when the colonel stops by to inspect the troops, Stubby salutes—thanks to a little help and training from his adoptive owner, Robert.

When Robert and his pals prepare to sail for battle-ravaged France, Robert leaves Stubby (who now sports a smart collar with his name on it) in the care of the camp’s cook. But Stubby isn’t about to let Robert leave him. The terrier unties himself, hops on a train and sneaks aboard the U.S.S. Minnesota, literally sniffing out Robert’s bunk.

The ship is already cutting through the Atlantic Ocean by that time. If Stubby’s discovered, he’ll surely be thrown overboard. So Robert will either have to hide him for a long, long ocean voyage … or hope that Stubby’s a very strong swimmer.

But you can’t hide a dog for long on a ship full of troops. Barely any time passes before the commanding general spots the stowaway terrier. Is Stubby cowed by this high-ranking official? Intimidated by the general’s gleaming, gold stars on his shoulders? Nope. He just picks up the general’s riding crop and hands it—or, rather, mouths it—to him.

The general smiles. “Make sure he receives some … dog tags,” he says.

Yep, Stubby is on his way to war. If only he could charm the German soldiers so effectively.

Once at the front, Stubby proves to be more than just a military mascot. He doesn’t play dead: He saves lives.

If the trench is rocked by explosions, Stubby rushes in to dig out the wounded. When someone gets shot, he barks until help arrives and serves as an unofficial morale booster. Stubby clears the trench of mice. Perhaps most helpfully, he can hear or sense some attacks—especially chemical attacks—before his human compatriots can, giving them ample warning to prepare. At one juncture, Stubby not only “suggests” that the soldiers put on their gas masks (in his little doggie way), but he dashes into a local village to warn the townspeople, too.

Robert proves to be a conscientious owner, caring for Stubby as best as he can and helping his canine friend pull his weight. The two form a symbiotic relationship, and the movie suggests that when Robert’s on the edge of death, Stubby’s companionship helps move him into a healthier place. And when eventually Stubby receives an honorary promotion to sergeant, Robert shows no ill will that his own dog now outranks him.

And for all the movie’s canine charms, Sgt. Stubby also serves as a bit of an animated history lesson. Much of what we see on screen actually happened, and the movie gives audiences a glimpse (albeit a sanitized and bloodless one) of what America, France and the Western Front looked like during this critical, terrible time.

When Robert and other soldiers prepare to ship out, the colonel addresses them, asking that they “pray that we will be home very soon.” (Robert’s sister, Margaret, who narrates much of the movie, echoes that same sentiment almost word for word.) The colonel concludes his address by saying, “God bless us all, and God bless the United States of America.”

We see several churches, both intact and bombed out, throughout the movie. When a soldier dies, his compatriots gather to mourn and bow their heads as sun streams through the clouds—a scene that feels quite reverent and spiritual, despite its lack of overt religious content.

Two soldiers spend time with giggling French women in Paris. We see a soldier in a bathtub.

Most of Sgt. Stubby takes place, obviously, during one of history’s cruelest conflicts. We never see any blood. And the “violence,” such as it is, stays within the bounds of the movie’s PG rating. But it never makes war out to be a lark.

During training, soldiers are exposed to tear gas: As they retch and cough after their exposure, the sergeant in charge tells them that the poison gasses waiting for them in Paris are much, much worse. We later see a fearsome gas attack (the missiles containing the poison are marked with an intimidating skull-and-crossbones), and German soldiers are almost always shown wearing dehumanizing gas masks. (The Allied soldiers have their own masks, of course, which Stubby doesn’t like one bit.)

Soldiers on both sides shoot and get shot at. Bombs burst in the air and on the ground, too, sometimes sending dirt and debris flying. Stubby gets wounded in one such explosion: The wound itself is not obvious, but we’re told it’s pretty serious. (We later see the dog hobbling around with a bandaged leg.) Several other soldiers are wounded, and we glimpse them some of them in bandages later as well.

One major character dies offscreen in a meaningless battle just hours before a cease fire was set to go into effect. (Margaret, the narrator, expresses bewilderment that so many soldiers would lose their lives in such an apparently senseless engagement.)

Cooks and shop owners throw things at Stubby. Stubby kills a rabbit (we see dead animal in the dog’s mouth), chases fearful mice and bites the rear of a German spy.

No profanity. Mild interjections include two uses of “darn.” One person is called a “moron.” Soldiers, both allies and enemies, are demeaned by those who use pejorative ethnic phrases such as “frog”(for the French) and “boche” (for the Germans).

Robert’s close French friend, Gaston, regularly chews on a pipe—but he admits that he hasn’t had any tobacco for it for a long time. He also offers wine to Robert by way of celebration. Robert declines, telling Gaston that he doesn’t drink wine and, besides, it’s against the rules. “Rules? What rules?” Gaston counters. “This is war!” He explains that the French typically transition straight from their mother’s milk to the “fruit of the vine.” We see other folks raise glasses of wine in a toast.

During drilling, the sergeant points to Stubby as a good role model for the rest of the soldiers … just as Stubby is licking his private parts.

The movie gives us a glimpse at some of the initial unease, even hostility, between the veteran French soldiers (who’d been already fighting the war for years) and the wet-behind-the-ears Yankees who are just showing up.

The exploits of Sgt. Stubby, the dog, feel a lot like those of Lassie or Rin Tin Tin or any number of fictional canines who fearlessly race into the thick of battle or rescue kids from wells or teach their owners long division. Lots of people love stories about too-good-to-be-true pooches.

But here’s the thing about Stubby: He was as real as they come.

He really did learn to salute. He really did catch a German spy by biting him on the bum (which earned Stubby his honorary promotion to sergeant). He really did rush out into no-man’s land—the desolate area between trenches—to find wounded soldiers. He participated in 17 battles over 18 months and trotted out of the conflict as a decorated vet. He lived until 1926, and when he finally found his place in the eternal kennel, his earthly remains were sent to the Smithsonian.

Sgt. Stubby: An American Hero seems about as well-meaning as the dog itself—if not quite as daring or decorated. This animated film offers young filmgoers an age-appropriate look at one of the worst conflicts in history, gives them a hero to root for and even celebrates time-honored virtues that are often overlooked now: bravery. Patriotism. Family. Duty.

While the movie does hint at some of the terrors and tragedies of war, I think that’s only appropriate. And outside of that wartime context (along with a smidge of name-calling and some visual references to certain doggie grooming habits), the film keeps its wet nose pretty clean.

Sgt. Stubby never asked to go to war. Not many do. But when he found himself there, he served with distinction—with no promise of anything but a little companionship and a nice bone at the end of the day.

And as far as I’m concerned, that’s worth a salute or two.