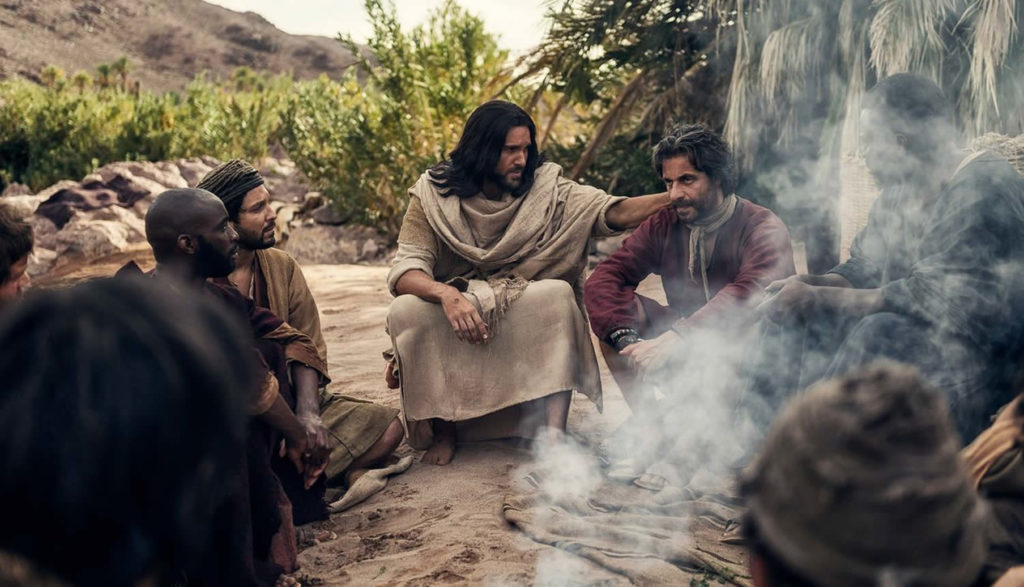 “It is finished,” Jesus said. And so, it seemed it was.

The Nazarene’s end was ignoble and brutal. This man—who many had believed was the Messiah—was arrested, tried and convicted in a single night, railroaded straight to the cross by Jewish and Roman leaders alike. A ministry that was supposed to change the world went out with a literal whimper, his grieving followers watching as their leader took his last painful breaths and, finally, was stilled.

And then, of course, came the fear.

Jesus was executed, technically, on charges of sedition. He claimed to be “King of the Jews,” according to his accusers, but the only king the Roman province of Judea could recognize was Caesar Augustus, back in Rome. Jesus might not have looked like a rebel, the Jewish Sanhedrin told Roman Governor Pontius Pilate, but he was leading a rebellion all the same.

That meant that Jesus’ followers were rebels, too. It was only a matter of time before the great eye of Rome turned to them.

“We need to leave before they find us,” one says. “Before it’s our turn to look down from Golgotha.”

Yes, Jesus prophesized all of this. He told his followers that he’d die and, in three days, rise again. And yes, they’d all seen Jesus do some marvelous things. But come on: Enough is enough. They saw Jesus die. They saw the spear dig straight into his side. Jesus may have raised the dead, but can the dead raise themselves? Preposterous. If it wasn’t so sad, it’d be laughable.

Just a few held out a whisper of hope: Mary, Jesus’ mother. John, the beloved disciple. Perhaps even Mary Magdalene was open to such crazy ideas. As for the rest … wouldn’t it be better to run? Wouldn’t Jesus want them to avoid his own grisly fate?

But then Peter thought about his own final hours with Jesus—how Jesus had told him that the man Jesus called ‘the Rock’ would crumble, denying even knowing his teacher three times. Peter swore he never would. But when the mob surrounded him and started hurling spittle-filled accusations, he did just what Jesus said he would: deny, deny, deny.

Peter would do anything to take his betrayal back—to make it up to Jesus somehow. And he remembered, too, Jesus’ track record. It seemed impossible, but had he ever been wrong before?

“Three days,” he tells his fearful companions. “I owe him that much. Our faith in him has to be worth three days.”

And then, if Jesus doesn’t rise again, they ask?

It is finished, Jesus said. That might’ve been the closest Jesus ever came to lying. Sure, one aspect of his ministry might have come to an end; his time as a man was finished. But as Peter and the rest were soon to discover, Jesus’ real work was only beginning.

Resurrection actually begins on Good Friday and runs through Pentecost, a critical time period within Christianity that most believers are reasonably familiar with.

But Resurrection fleshes out those rather bare-bones biblical accounts, giving many of the characters new dimensions and emphasizing certain characteristics that we might otherwise gloss over when we read in the midst of a Bible reading plan.

Peter’s the standout here, and we see him quickly develop from the terrified denier to a bold, almost fearless evangelist in the days and weeks after Jesus’ death. When Jesus (who, spoiler alert, does come back) asks Peter whether he’s willing to die for Him, Peter responds, simply, “I am,” and then begins to prove it.

The film treats kindly those who believed in Jesus’ return from the very beginning, too. The faith of John and both Marys prove to help put a little backbone in others, serving as a powerful counterpoint to those who’d rather run for their lives.

We meet other heroes as well. Joseph of Arimathea gets some prime screen time here. As a member of the Sanhedrin, he serves as an important dissenting vote in the Jewish body of elders, sometimes going toe-to-toe with the High Priest Caiaphas. And, of course, he gives up his own tomb so that Jesus might have a suitable burial. He didn’t believe Jesus would come back, but he believed that the man “deserved greater respect in death than he’d ever been afforded in life.” Peter and the other disciples receive aid from some unexpected quarters, as well. And in a critical moment, a recipient of a miracle tells the truth—despite some heavy incentive to lie.

This film is, obviously, inherently spiritual. But not everything we see here comes straight from the Bible, and those who were troubled by The Chosen for its extra-biblical narrative will have the same issues here. In addition, some of that content could spark conversation or disagreement with those who are sticklers for detail. For instance, Peter gives a pep talk where he says, “The kingdom of God is coming, and we will be fit to enter!” Some might say that no one is truly fit for God’s kingdom, and that this seems to tilt toward a works-based theology. (Others might counter that that’s not what Peter meant at all, and that we are fit to enter when we accept Jesus.)

But Resurrection also offers an engrossing take on the story—one that might help both longtime believers and those curious about the faith to see Jesus’ death and resurrection in new ways. The political and spiritual complexities of the day are unpacked here as well. We see Jewish leaders engage in age-old religious practices (including a ritual bath) and we can perhaps better understand why the religious leaders of the day were so resistant to this new, unexpected Messiah.

We hear about allusions to earlier Scripture, too: For instance, Caiaphas is furious with Joseph for handing his own tomb over to Jesus, rather than letting his body be eaten by wild beasts (as was more common). Why? Because of Isaiah 53:9, which reads, And they made his grave with the wicked/and with a rich man in his death/although he had done no violence/and there was no deceit in his mouth. Joseph’s gracious gift could be read, Caiaphas insisted, as a fulfillment of prophecy about the Messiah, whether Joseph intended it to be or not.

There’s some discussion as to whether Jesus is a ghost—a point Jesus Himself disproves when he eats with His disciples. We hear about prophetic dreams, and Pilate’s wife tells him that “the gods find us in our sleep.” A miracle is performed. We see angels and Jesus’ transfiguration.

Caiaphas takes a ritual bath in a mikveh—a cleansing ceremony in advance of Passover. He does wear something that covers his privates much like underwear would, but we see most of the rest of him.

We’ll begin with the crucifixion: Jesus, covered in blood from the scourging and torture He’d already dealt with, is nailed to the cross and obviously in pain. We don’t see the nails go into the flesh, though—only watch as the Roman soldiers position them, then hear Jesus’ anguished cries as the camera focuses on his horrified followers. Later, Roman centurions take a hammer to the knees of another crucifixion victim, to hasten his death. When they reach Jesus, John begs them to not visit this latest humiliation on Jesus. “This is his mother,” John tells them, gesturing to Mary. “Spare her that.” But orders are orders, and the Romans were ordered to make sure Jesus was dead. So they take a spear and stab his side (again off camera).

In the wake of Jesus’ death, a terrible storm sweeps through Jerusalem, toppling walls and pillars (sometimes on top of people). Mary and others wash the corpse in the tomb. We hear that, had it not been for Joseph’s kindness, Jesus would’ve been left to be eaten by wild animals (as would normally be the case, apparently, for a criminal). After His resurrection, Jesus shows His disciples (and us) the wounds in His hands. Judas hangs himself.

Remember those soldiers who ran away from the empty tomb? Resurrection tells us that Pilate had them killed—strangled in front of Caiaphas, thus (he believes) killing rumors of Jesus’ resurrection as well.

John and Peter are brutally beaten by Romans; Peter watches as John is thrown in his prison cell, one of his eyes swollen shut and blood coating his teeth. Peter, sporting his own grotesque injuries, laughs a bit. Peter and others have some run-ins with Simon the Zealot, who encourages the disciples to join them and resist the Romans with force. (We see an array of knives in a zealot hangout, though Simon insists that “We only take life as a last resort, unlike our occupiers.”) Zealots and others struggle and fight Roman soldiers, and a near riot takes place at Jerusalem’s gate (that includes the hurling of what would come to be known as Molotov cocktails). Fire swirls around the disciples during Pentecost. Someone’s pushed up against a wall. Soldiers throw around furniture.

We’re witness to Jewish sacrificial rites, involving gallons of blood splattered on walls and altars, more blood on floors and countless animals either alive and waiting to be slaughtered or already dead. Organs and entrails are visible, too.

Caiaphas appears to throw a cup of wine during an argument before dinner.

After Peter performs a miracle, Caiaphas’s wife tries to bribe the miraculous recipient, and Caiaphas insists in a public trial that the “miracle” was nothing more than a show. Not only were Caiaphas and his wife engaged in both bribery and lying, but they would’ve sent an innocent man to prison and likely death had the scheme been successful.

Resurrection tells us the story of the ultimate truth, the truth that Christians believe can—and did—set the world free.

It’s not necessarily the whole truth: No 21st-century storyteller, no matter how devout or how well-meaning, can truly show us everything that took place surrounding that very first Easter. Even movies that stick to what Scripture says inherently leave out what Scripture itself leaves out. No one, of course, had a cell phone to record or live-tweet anything. Certain storytelling liberties are a part of any modern retelling.

But does Resurrection point to that life-changing truth? Does it do it justice? I think it does.

Produced by Mark Burnett and Roma Downey, a husband-and-wife team who’ve become pretty well known for their Bible-based films and television shows, Resurrection takes this age-old story and gives it color, depth and context. I especially like what the film does with Peter, showing us how the guy moved from a three-time Jesus denier to the man who’d live—and die—for Christ. Fans of Burnett’s and Downey’s work will find this is of a piece with their earlier efforts. The multiracial cast reminds us that Jesus died for all of us, and that all are welcome in His kingdom.

This certainly is no scrubbed-spotless take on Jesus’ crucifixion and resurrection. The story can get pretty bloody at times—a reminder of the real cost of Christ’s sacrifice, but something to be mindful of all the same. But for discerning viewers, Resurrection packs a visual and narrative punch that few Easter Sunday readings can match.