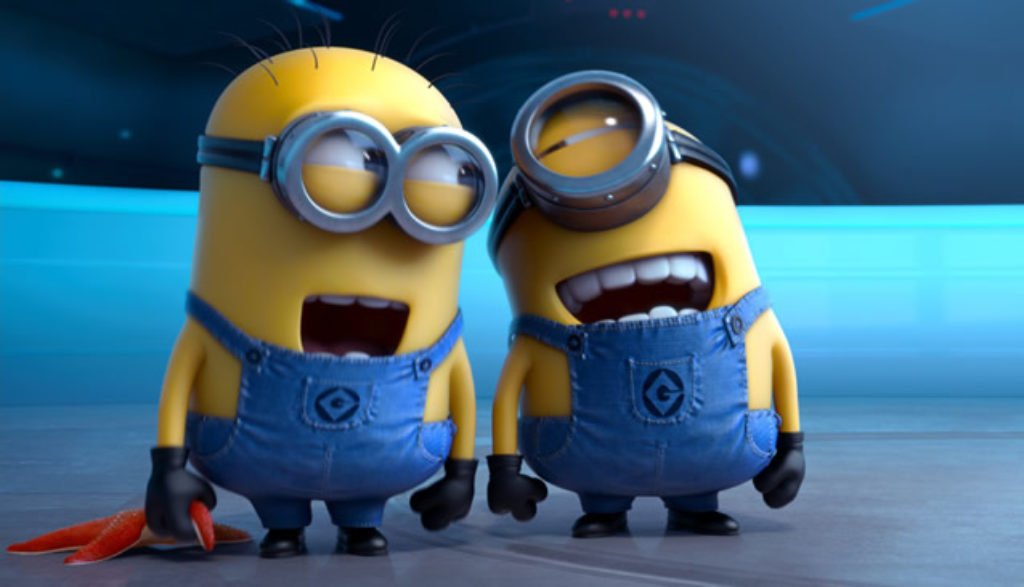 From the moment the yellow, Twinkie-like Minions popped up out of the primordial ooze, they had one thing on their tiny babbling minds: Find the biggest, baddest boss around and serve him. After all, it’s the deadliest dog that gets the bone. And it’s the most menacing monster that frightens away potential threats. So it only makes sense to them that they should tag along with some horrible honcho and become his henchmen. Or perhaps henchminions.

Of course, that doesn’t mean the Minions were always all that good at, uh, henching. That’s because these little goggle-eyed goofballs frequently tend to, uh, destroy their would-be monstery masters. They accidently push the mighty T. rex into bubbling lava, surprise Dracula with a crisping dose of morning sunshine, blow away Napoleon with his own cannon … the list of mortal blunders goes on.

In fact, after a few thousand years or so, the Minion tribe finds itself alone in the Antarctic. Surviving, but, well, kinda depressed. After all, who can really enjoy a good wintery song or a snowball fight without a fiendish boss watching?

That’s when Minions Kevin, Bob and Stuart make a unilateral decision for their whole myriad tribe: to set off on a quest to find a new superbaddie whom they all can serve and idolize. They’re determined to slip on their snowshoes and trek the world over, if necessary, to find that special, dastardly, nasty, powerful and heartless someone they long for.

And find her they do, in the form of a world-conqueror-in-a-crimson-dress named Scarlet Overkill. Why, she’s ruthless! Maniacal! More than a little vain! In other words, she’s perfect! The guys simply need to find their way to something the humans call Villain-Con and demonstrate their best baddie sidekick skills …

… if they can come up with any, that is.

For all their desire to serve a big bad wolf-type leader, the Minions are all pretty innocent, kiddish and sweet. They may be happy to carry around a boss’s death ray, but they’d never dream of actually using it on anyone. And so when they set off to steal the Queen of England’s crown, it’s much more about just making Scarlett happy than getting rich or making anyone else sad—or understanding that stealing is a bad thing, for that matter. (They’re kinda one-dimensional like that.)

Those mindless Minion pals (Kevin, Bob and Stu) are also rather selfless at times, putting themselves at risk when their pals (or others) are in danger. Kevin repeatedly treats Bob like a kid brother, cleaning his messy face with a moistened thumb and giving him a bit of arm-around comforting. When Scarlett threatens the boys with a missile, an oversized Kevin goes so far as to swallow the weapon to protect the others. And after all of Scarlett’s threats and attacks, Bob even gives her a prized possession of his own in an effort to make her feel better.

The Minions mumble the word kumbaya as a symbol of peaceful agreement. The film’s opening moments depict the Minions’ origination as one-celled organisms that evolve into … one-brain-celled organisms with arms and legs.

We see a few bare Minion backsides—generally played for kiddy giggles. A group of Minions step out of the ocean onto land, for instance, and one of their number gasps because he appears to have lost his swimsuit. He runs back to the water and sighs in relief after pasting two starfish on his featureless chest. In another scene, Stuart wears a thong swimsuit into a hot tub where he embraces two yellow, inanimate, fire hydrants.

When Scarlet reconnects with her husband, Herb, she embraces him, and the two express love for each another. Kenny gigglingly mimes the couple’s embrace to the other Minions, wrapping his arms around himself and squeezing his own backside. Elsewhere, Minions stand on one another’s shoulders to dress up as a human woman in order to pass by some guards. Kenny’s goggled eyes land at the approximate location of the “woman’s” bust line and he shocks a passerby when he flips up his eye covering to look around.

Three hypnotized human guards strip down to boxers and sing a “Minion lingo” chorus, a nonsensical ditty set to a tune from the musical Hair. They give one another slaps on their backsides at one point in the song. Several adoring fans at the Villain-Con dress up in outfits mimicking Scarlett Overkill, one of whom is a man with a mustache. After Scarlett’s dress becomes a rocket of sorts, we see her adjust her outfit to make sure the top part stays put properly. A male hairdresser is played effeminately. A crime-related magazine features a “centerfold” of a fully clothed Scarlett.

Pratfall thumping and bumping reigns supreme here. Early on, we see fish gobbling each other up, a caveman getting jumped by a massive bear, a soldier impaled by his own sword, a pyramid landing on a crowd of Egyptians, Dracula turned to ash by the sun, etc. But it’s all played as slapstick silliness rather than anything painful or truly deadly. (Never mind that none of these unfortunates would likely agree.)

The Minions, meanwhile, are picked up by a villainous but cheery family of bank robbers who speed away from police, shooting paintballs. Their baby pulls the pin on a grenade that’s then chucked out the window. And the Minions accidentally trigger an RPG that blows up a nearby water tower and causes the police to crash.

When we first meet Scarlett, she issues a challenge to the baddies gathered to see her. As these muscular thugs and villains attack her, she fends them off with flips, punches and thumps, leaving them all unconscious in a pile by the end. She tells the boys a bedtime story about her blowing them up if they disappoint her. Missiles are loosed, buildings are crumbled. A time-leaping scientist is accidentally knocked in the head with a heavy object and killed, after which all the other timeline versions of him blink out of existence.

At one point, the Minions are sent into a dungeon where Scarlett expects them to be tortured. But her hubby, Herb, soon realizes that Minions are so stretchy and spongy they can’t be tortured. Every scary-looking thing he tries (the rack, a hangman’s noose, etc.) turns into something akin to playground fun as the boys tumble and laugh during their supposed “torture.” Even a punch to the crotch turns out to be pain-free for the genderless Minions.

The Minions make several harsh exclamations of “bee-do,” “ba-na-na” and …

OK, those little guys with their silly lingo don’t say anything that their young fans couldn’t repeat. Characters around them say “gosh,” “heck, yeah” and the mild British pseudo-profanity “blimey” once or twice.

A Minion is shown drinking what looks like a martini. The Queen drinks pints of beer with blokes at a local pub and might just be a bit snockered.

A huge Sumo wrestler runs around dressed in a small loincloth. Bob passes gas for a giggle. The dangers of war, hitchhiking, bank robbing and crown jewel stealing all get shrugged off as simply good Minion fun. At one point, it looks as if a giant Kevin is urinating on a fire, though the stream is actually coming from a fire hydrant.

“Silly rabbit, Trix are for kids!” a familiar commercial slogan once said. That ad made it quite clear who should be yearning for its featured bowl of multi-colored, morning-time sweetness. But, of course, we all know it’s not just breakfast cereal companies that have specific marketing targets in mind. Movies zero in on those kinds of bull’s-eyes too.

So if Pixar’s recently released Inside Out is a bright and thoughtful animation laced with emotion aimed at making adults just a tad teary, then Minions is, well, just for kids, silly rabbit.

Other than a light message about sacrificing for friends, this prequel to the Despicable Me films is little more than 90 minutes of goofy silliness designed to uncork a cluster of cackling kid convulsions. It’s something like the modern equivalent of an old Three Stooges flick—only with cuter, more childlike protagonists.

The Minions are the kind of adorable dweebs who belly-laugh over a good banana-peel pratfall, snicker over someone being thwacked in the backside and pucker up for a childlike goodnight kiss before night-night.

The only slight problem with this film’s kid-focused formula is that sometimes it features a few more bare yellow backsides, goofy sensual wink-winks and try-that-on-your-brother head-boinks than Mom and Dad might be completely comfortable with.