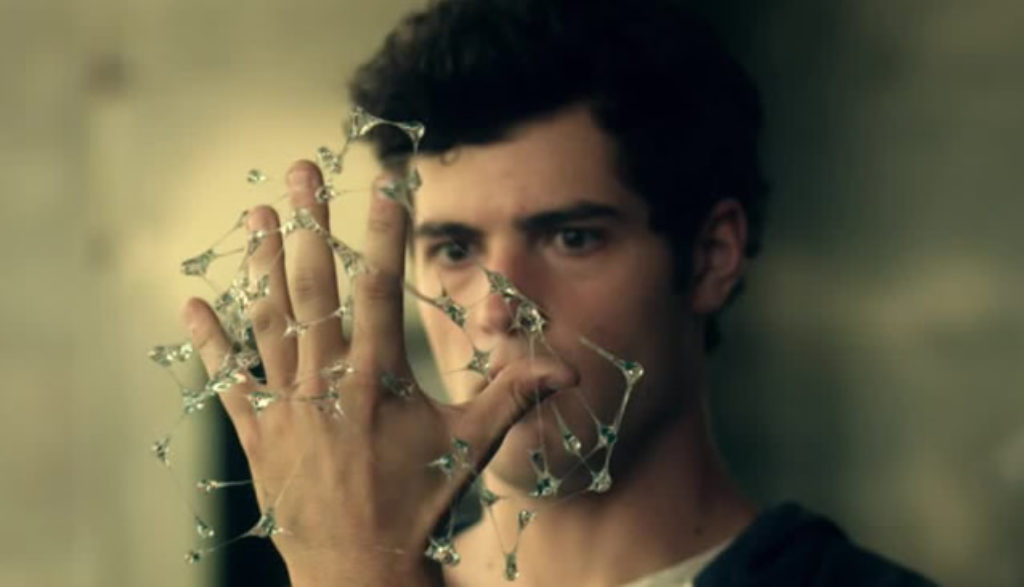 It’s hard being a handsome, winsome teenager with a tragic backstory.

Take Max McGrath, for instance. Max’s father died in a tragic and mysterious tornado accident when he was quite young. He and his mother, Molly, have been moving around the country ever since. They’re in their ninth home now, a place where Molly hopes they can both have a “fresh start.”

‘Course, this fresh start is actually where Max started: their first family home, located in the very town where said tornado struck. I can only assume that, had Max’s father died in a traumatic merry-go-round accident, Molly would’ve suggested they live in an amusement park.

But Max doesn’t have time to dwell on his mother’s peculiar residential affinities. He’s got a new school to adjust to. New friends to not make. A new girl, Sofia, to awkwardly hem and haw around. And then there’s this new … thing going on with his hands. He can’t quite put his finger on it at first, but after a while, he nails the sensation: Blue, liquid energy of some sort is leaking from his hands, and that sort of thing is nothing to thumb one’s nose at.

At first, the energy thing seems kinda cool … until it starts shorting out his smartphone every time he touches the device. It tends to burn out lightbulbs, too. It can give him headaches. Oh, and one memorable evening (or it would’ve been, had Max not blacked out), the built-up energy almost caused Max to, well, explode.

Now, adolescence can be a tricky time. Every teen probably feels like he’s going to blow up now and then. But this sort of thing seems altogether different from what he learned about in health class. And it’d sure be nice to talk with someone about it.

Not his mother. No, no. She’s his mom, for cryin’ out loud, and everyone knows that teens don’t talk to their mothers. Plus, the minute he mentioned the whole near-explosion thing, she’d likely want to move to a dynamite factory.

Sofia? Heavens, no. She may be the only person Max talks to in school, but she’s pretty. What would she think of him? Blue liquid energy is, like, a thousand times worse than cooties.

No, it seems as though Max will have to deal with his explosive energy problem all on his own … until he meets a strange, indigo-glowing alien who not only understands Max’s strange energy output, but literally eats it up. They share some sort of strange, symbiotic connection, and somehow the alien’s presence allows Max to run faster, jump higher and do Bruce Lee-like flip kicks. Why, the alien can even coat Max in a nifty living suit of armor when the need arises—perfect for all the pair’s future battling needs.

The alien’s name is Steel—an admittedly odd name for an alien creature, but no matter. Because the key thing is that Max has what Steel wants. And Steel just may be the friend that Max has been looking for.

‘Course, they’ll have to battle sentient, alien-powered tornadoes before they can truly cement their friendship. But now we’re getting ahead of ourselves.

Max seems like a nice enough teen. He helps bullied schoolmates pick up their books. He listens to his mother when she tells him not to lean back in his chair. He only whines occasionally. And given his age and lot in life, that’s not too shabby.

But eventually he comes to understand that he and Steel are the only two things standing in the way of Earth’s hostile takeover by sentient tornadoes. And we all know that self-motivated weather disasters are nothing to mess around with. Despite the odds, Max and Steel—or, Max Steel, as the movie seems to suggest we should call them—risk their lives to save the world, and occasionally make side trips to rescue the people they love, as well.

We should also note that despite Molly’s overprotective nature (as the movie sees it), as well as her strange desire to move back to the site of a family tragedy, Max’s mom is quite nice and loving. And before the movie ends, both Molly and Max realize that sharing with each other—talking about each other’s trials and tribulations, no matter how ridiculous they might seem—is really a healthy, positive thing.

[Spoiler Warning] Max’s odd abilities can feel a little like psychic powers that have drunk too much espresso. We learn, however, that they’re simply a byproduct of Max’s dad being an alien.

Sofia and Max kiss once. They touch hands. They stare at each other with some frequency while they try to think of something witty and clever to say. (They never, ever succeed.) Clearly, they are in love.

Max sometimes walks around without a shirt for no discernable reason.

Max’s energy acts like water—sometimes running out of the guy as water does from a hose, sometimes building up inside as if Max were a water balloon. As such, sometimes Max accidentally blows things up (lamps, alarm clocks, etc.). And, of course, we’ve already mentioned that the energy could blow Max up unless it’s siphoned off in some way. Max collapses after his close call, finding himself in bed with strange-looking wounds on his chest, while his shirt and bedsheet have holes burnt in them.

Things get better when Max meets up with Steel, but their afternoon of training is fairly perilous. Max falls from a great height and smashes his fist painfully into a concrete pillar.

Once he’s all trained up, Max must deal with all manner of evildoers. A gigantic cyclone with seemingly a red, glowing eye chases him through the wilds as a terrific lightning storm threatens to fry him with bolts of electricity. (Max hides under metal train cars and in a metal pipe, which seems counterintuitive.) He and a similarly suited adversary exchange punches, kicks and throws.

There are a few energy-based showdowns that seem to vaporize a couple of people. Mysterious operatives in black SUVs pursue Max and Steel, shooting bullets at both on occasion. When Steel breaks loose from his terra-based prison near the beginning of the movie, he causes a great deal of destruction and havoc among those who are supposed to be guarding him.

The fate of these guards and scientists is unseen for the most part, but we do hear them fire weapons and shout and scream in panic, and there’s a suggestion that rubble falls on at least some of the humans. A bad guy seems to kill at least one adversary with a prong-like arm attachment. Others are somehow dispatched, but off camera. We see people running from tornadoes. Sofia nearly hits Max three times with her ancient SUV. (Max flies off his bike and lands hard in the grass during one of these near mishaps.)

Steel tells Max that he’s committed to “protect you from everything that’s trying to kill us,” but he sometimes gets a little overzealous in his mission, threatening to kill several classmates—including Sofia.

Max utters what seems to be the first part of the f-word after punching a concrete pillar. There’s also a suggestive “sh…” that trails off into nothing. Characters also say “d–n” twice, “h—” once and misuse God’s name about 10 times.

Molly and an old family friend have glasses of wine in front of them during a meal.

Molly withholds information about Max’s dad from him. Max and Steel break into an old, deserted laboratory. “NO TRESPASSING,” Steel reads. “All caps, Max. Looks pretty serious to me.”

Max Steel is what would happen if the movies E.T. and Iron Man somehow had a baby. Based on two television shows and a Mattel toy of the same name, the film is just as lightweight as you’d imagine and, if possible, even worse than you might expect.

Oh, I can hear you now, you movie-lovers, you. “Paul,” you say, “just how bad can a movie with intelligent roving killer tornadoes be?” And it’s true, when you put it like that, you’d expect this film would have some promise. But alas, Max Steel never really reaches a level of goodness to be truly entertaining, nor a level of badness to be unintentionally funny. For all the weather disasters and wisecracking aliens and other feats of CGI wizardry, the whole movie feels like kind of a slog.

That said, from a Plugged In perspective, it could be worse. A lot worse. There’s no sex to speak of, and the violence—despite a few presumed fatalities here and there—rarely reaches a fevered pitch. It offers some nice messages about family and the importance of communication. If you’re going to sit through a nearly two-hour commercial for Max Steel action figures, you might as well have a positive message or two to glean, right?