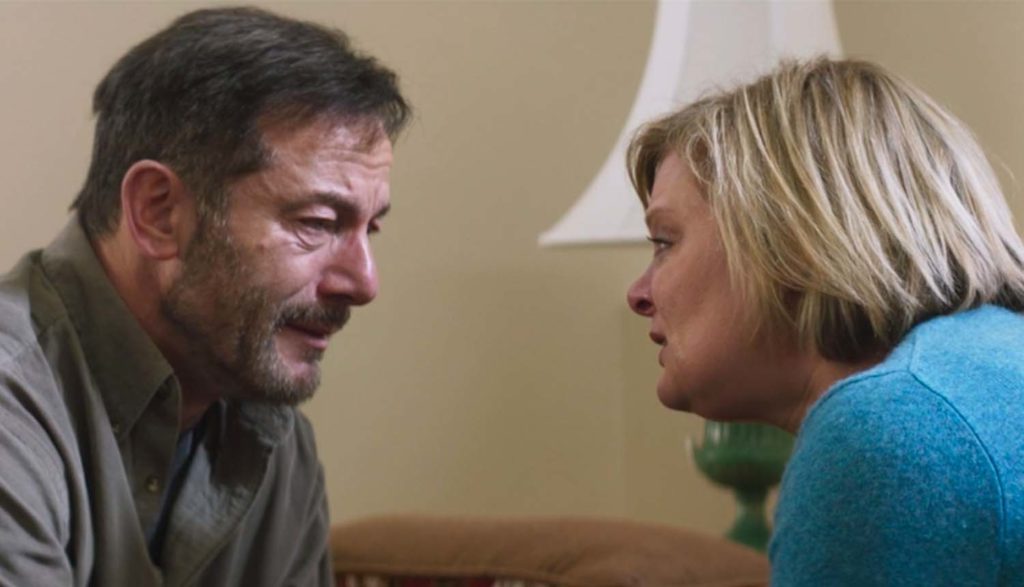 Our lives are molded by moments, shaped by seconds. What happens in an instant can be felt for eternity.

It took Hayden just a matter of minutes to destroy so many lives. Some he ended outright when he chucked a bomb into a high school classroom and opened fire. Other victims will carry the scars for a lifetime. But some of those scars are more obvious than others.

Jay and Gail lost their son that day—their athletic, popular loving boy, Evan. They know everything they can about how he died. They saw the tape that marked his body. They saw the trail of blood.

But they don’t know why.

Maybe that’s why they agreed to come. To sit on wire-frame chairs in a modest room in a modest church. To talk, face to face, with another set of parents: Hayden’s mom and dad.

“Tell me about your son,” Gail says with hard eyes and crossed arms. “I want to know everything.”

But Linda and Richard have only so much to say. Because, really, they want to know, too. They want to know why their shy little boy grew into a killer.

“We don’t know what happened,” Linda said, her face red with tears. “We still don’t know.”

But maybe, under the pain, healing, too.

That’s where we must begin this review in earnest—at the end. At the healing.

Mass is about pain unimaginable to most of us. It’s about grief and shame and regret and lives shattered in so many ways. This meeting takes place about six years after the mass shooting, but the wounds still feel so fresh.

But we hear that some, painfully, are beginning to move on. Evan’s little sister, after years of being unable to sleep, is apparently looking at colleges. Hayden’s older brother and his wife have a baby on the way.

The two couples we meet are fighting to find some semblance of closure, too—to finally find the wherewithal to move on. This face-to-face meeting is part of that journey (one encouraged by Gail and Jay’s counselor, Kendra). And even though Jay and Gail know better than to expect answers, they desperately want them. To understand the why.

We understand how they feel, of course. But how can one answer the unanswerable? The solution, it seems, is deeper and harder—rooted in painful honesty, hard-earned understanding and, finally, perhaps a hint of grace.

The title of the film offers a double meaning. Mass refers to the mass killing, of course. But it also reminds us that this meeting takes place within the holy confines of a church. It’s fitting, given many of the questions and solutions in play here are, essentially, spiritual ones.

The film reminds us often of Mass’s sanctified setting. Almost the first and last images we see are of the church’s brick steeple. The church itself is dotted with the detritus of many a small church: Signs in the hallway advertise small church get-togethers; a worker folds programs; a piano teacher and his student practice playing hymns in the sanctuary. We see Bibles on tables, kids’ wax-paper artwork designed to look like stained glass. And in the room where most of the movie takes place, a cross with a stylized Jesus hangs huge on a wall.

But Jay’s not religious: He says so. He says that in the wake of the shooting, the “whole church movement thing made me so angry,” and adds that you can “trust the Catholic church to come up with the most bankrupt response,” mistaking the church he’s in as part of that denomination.

But the church is Episcopalian—as a church worker makes clear through a little “Christian humor.” The worker comes across as well-meaning but a bit clueless. In trying to make her visitors comfortable, she often seems to do exactly the opposite—perhaps a sly indictment on church itself.

We hear references to other churches as well, including the fact that none of them would memorialize Hayden in the shooting’s aftermath. And even secular elements seem to come with a hint of spirituality. Kendra, the counselor, wears a white scarf against a dark outfit, making for a rather priestly appearance. And people gather in a moment of reflective silence—with some closing their eyes as if in prayer.

[Spoiler Warning] The film takes a more explicitly spiritual turn toward the end, where forgiveness becomes a catalyst for great change and Gail expresses a belief in an afterlife. “I know I’ll see him,” she says. “I know I’ll hold him against me if I can just forgive—if I can just love again.” And then, as the couple prepares to leave, unbelieving Jay hears the church choir practice. He’s moved to tears.

Linda, Hayden’s mother, mentions that one of the only people whom Hayden seemed to connect with was a math teacher. “He loved him,” Linda says. “I don’t know what the connection was or what it was so great, but he made him feel confident when he didn’t.” The words themselves feel innocent, but the reactions of Gail and Jay (and almost the apologetic way in which Linda responds) suggest, perhaps, a bit of suspicion that the relationship between Hayden and the teacher wasn’t necessarily appropriate.

Richard and Linda say that Hayden wasn’t planned. Though never explicitly stated, it seems like the two are separated or divorced, with Richard hoping to catch a flight out of town that afternoon. Gail mentions that she and Jay’s daughter is now dating.

Visually, the movie is free of violence (unless you count the slamming of a tissue box as “violent.”) But we hear the parents talk, in detail, about the school shooting and its aftermath. We learn how victims died and what their last moments were like. We’re told about what the school looked like afterward, with tape outlining where the bodies once lay.

We’re told something of Hayden’s childhood, too. Early on, he’d carry snails in a jar. But when the snails died, he replaced them with paper replicas. We’re told that as he grew older, he spent more and more time online, especially playing Call of Duty and other violent video games—habits that Jay believes must’ve contributed to Hayden’s apparent lack of empathy. Hayden apparently had some violent outbursts and expressed both suicidal and homicidal thoughts—thoughts his counselors at the time felt these exclamations were pretty normal for a boy his age. Not so normal? Building a pipe bomb, which he did and set off even before the shooting.

We hear some debate revolving around the issue of gun control and mental health.

One f-word and two s-words. We also hear one use of the word “h—,” three misuses of God’s name and at least five abuses of Jesus’ name.

Hayden was prescribed drugs as a way to deal with his mental issues and depression, and we hear some references to them. We also hear references to alcohol and substance abuse groups that meet in the church.

Hayden was troubled, of course. We hear how misbehavior manifested in his relationship with his parents—how he’d often lie to them and how they’d all sometimes fight. We also hear that Hayden was bullied quite a bit, too, though we don’t hear any specifics in how that bullying manifested itself. We learn that Hayden stole the guns he used from a friends’ house.

We don’t see a drop of blood in Mass. We don’t hear a single bullet fired. But this quiet film may be among the year’s most devastating.

This film is hard to watch. From the opening moments of awkward conversation to the honest agony we see later, Mass is in its own way more difficult to watch than a slasher flick. Here, bodies don’t bleed: souls do. And, of course, you’ve got a bit of profanity to navigate here as well, too.

But while Mass can be mighty difficult to watch, there’s more to unpack here. The film itself reminds us that sometimes, what’s hard can also be good.

Jay and Gail, Linda and Richard are engaged in some incredibly wrenching conversations. And even then, their words surely can’t touch the pain and horror and guilt and anger they feel. But as they talk, they change. Crossed arms relax. Tears flow. The conversation changes from grenades thrown across battle lines to connection. Understanding. A shared sense of grief.

It doesn’t make everything better, of course. The dead are still dead. The agony of loss is still alive. But we see hints of healing—a bit of green poking through the frozen ground after a long, hard, winter. We see a hard-earned hope begin to grow.

Folks who’ve dealt with unimaginable loss know how difficult it is to move on. Some never do. Mass tells us it’s not easy, but it also gives us the ingredients to push forward: tears. Honesty. And ultimately, forgiveness. Because sometimes perfect justice is elusive. Sometimes making things right just isn’t possible. The hardest of truths might be this: Sometimes, we must let go of our anger, no matter how justified, no matter how righteous.

Sometimes, we must let go.