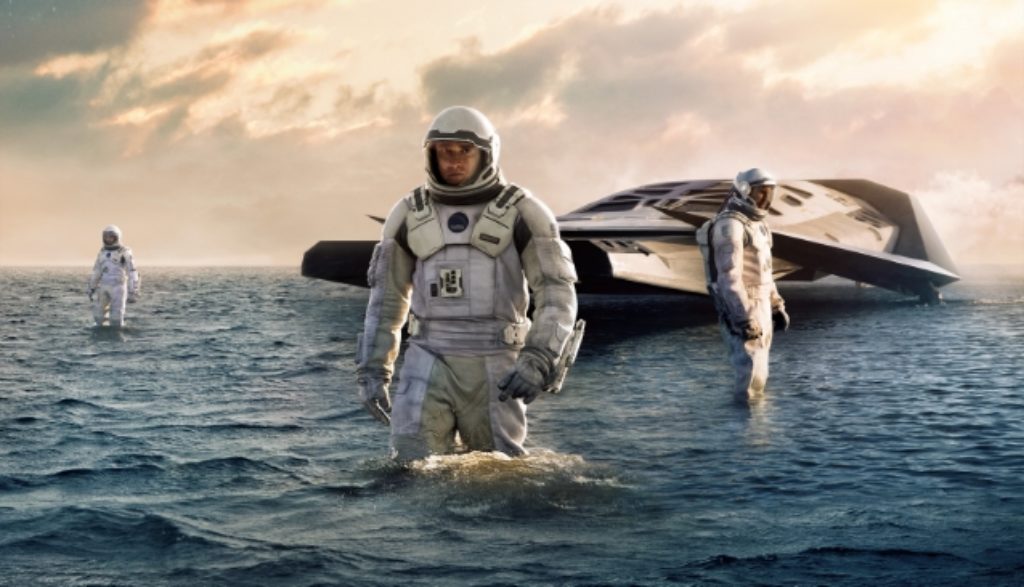 Everything has its time, we’re told in Ecclesiastes. And for planet Earth, it’s time for death.

Not that you’d know it from a cursory glance. In fact, most folks hope the old girl is on the road to recovery decades after an environmental cataclysm wiped out most of the globe’s food supply. Now, severely depopulated and humbled, we’re getting back to the basics: growing food, maintaining shelter, spending time with family. A few of us might even take in a ball game on a lazy afternoon.

But a nitrogen-eating blight is again cutting down crops, one by one. Wheat, rice, okra … nothing survives the disease these days except corn, and that may not last much longer. Massive dust storms sweep across the land, choking out light and life alike. And even as people push through day by day, it seems society has lost something critical: it’s desire to explore, to search for something better.

And that place in the dirt for Coop means scraping together a living as a farmer instead of continuing his career as an astronaut. It means having to deal with his high-tech combines taking off in their directions instead of doing what he’s programmed them to do. And listening to his 10-year-old daughter, Murphy, saying there’s a ghost in her room. Then, when a dust storm blows through Murph’s open window, it seems the grime has made strange patterns on the floor … as if it—the dirt itself—was trying to tell them something.

It is, actually. And Coop discovers the dusty lines are binary code that, when translated, become coordinates on a map. When he and Murph go there, they find a massive, secret science facility—perhaps humanity’s last real hope. The scientists and engineers who work there, led by Coop’s old NASA associate Dr. Brand, have found a mysterious wormhole near Saturn that leads to a new galaxy. They’ve already sent a dozen intrepid scientists through the hole and to some promising planets beyond, but they need another ship to now shoot through, retrieve data from the 12 and return home with it.

And, Brand tells Coop, they could sure use a good pilot to fly the thing. If all goes well and the theory of relatively works as it ought, he could get back home in, oh, a few decades or so—looking no worse for wear and ready to save whatever’s left of humanity.

If not … well, Coop should give Murph an extra-long hug goodbye.

Coop and the mission scientists, Amelia Brand (daughter of the good doctor), Romilly and Doyle, accept this bold mission through the wormhole in a selfless effort to save humanity. They do so without any guarantees of success or safety. They know the odds are long, but they’re determined to give it a shot.

But to undertake this worthwhile mission means Coop will leave behind his kids, whom he clearly loves more than anything. Throughout the movie we see just how much he cares for them, even from afar, and how much it hurts him to leave them. And even though Murph’s angry with her dad for leaving, the love the two share proves to be a pivotal element in the tale’s resolution. Indeed, Interstellar posits that love, not wormholes or black holes, is the mightiest force in the universe.

One whole wall of Murph’s room is devoted to a bookshelf, and there are times when the thing seems to be a little haunted. Books tumble to the floor, seemingly on their own. A lunar lander model is knocked over. Murph tells her father that it’s a ghost. Coop says that ghosts aren’t real—but clearly something’s going on. So he asks Murph to document what she sees and treat it like a scientific problem.

[Spoiler Warning] Murph’s ghost does have a sorta-science-like explanation, as do all the other oddities we see here. For all its talk of love and its sometimes spiritual-feeling vibe, Interstellar appears to embrace a primarily humanist worldview. We hear references to evolution. And though scientists talk about a mysterious “they” helping us from a distant galaxy, neither god nor alien make an explicit appearance. Our saviors, the story suggests, are us.

Still, the initial flights through the wormhole to save humanity are called the Lazarus Projects, named after the man Jesus raised from the dead.

Cooper is a widower. His father-in-law suggests he should woo a local teacher and do his part to repopulate the Earth. “Start pulling your weight,” he jokes.

Astronauts fight, one pushing another off a cliff, and the two wrestle in their space suits. One cracks the visor of the other’s helmet, hoping to murder him. Other folks expire in explosions. One is killed after being thrashed around by a giant wave of water. Humans and human-sounding robots sacrifice their lives/existences for what they see as a greater good.

We hear something of the disaster that befell Earth and know it must’ve resulted in catastrophic death. And we hear about/know about other, closer-to-home deaths as well, some of them natural, others not so much. Coop and his kids nearly drive into a lake while racing after a drone. Someone sets fire to a field of corn as a diversionary tactic. Someone else brandishes a tire iron.

A scientist deceptively continues to tell folks for years that there’s hope for them, long after he’s given up on that dream and moved on to a colder, more heartless plan. Other characters also mislead, often for reasons they think are good. And even the computers have their “honesty” parameters set at 90% because (as one computer tells us) being completely honest with emotinal humans is often a mistake.

Whatever its faults, Interstellar does not lack ambition.

This epic story is director Christopher Nolan’s biggest movie to date, however you want to define the word “big.” (And that’s saying something, since this is the man responsible for The Dark Knight trilogy as well as Inception and Memento.) Interstellar is nearly three hours long. It’s visually massive. And it’s devoted to huge cosmological themes predicated on mind-bending physics. (Kip Thorn, one of the world’s foremost experts on the theory of relativity, was an executive producer.)

And it’s also about love conquering all.

It’s a fascinating film, even if it tries to do a little too much. And it will inspire lots of different reactions from moviegoers. Some will see the majesty of the universe and the mighty hand of God at work behind it all. Others may take it as a humanist-minded scientific screed, one that goes out of its way to say we’re on our own out here in interstellar space.

It seems pretty obvious that the movie wants its explanations to reside in the naturalistic, humanistic realm: There are no moments of divine transcendence here, not even the subtle nods we see in Gravity to the eternal soul and prayer. And yet, even for its lack of interest in theology, there’s still something deeply spiritual undergirding this work.

The adventure that Coop and his fellow scientists go on contains the barest of hints of biblical narrative: They, like Noah, are trying to save a remnant of creation. They, like Moses, are looking for a “promised land,” one seemingly pointed to via an incredibly providential wormhole. One, as a mirror of Jesus, sacrifices himself to save the world and is even figuratively resurrected long after he should be dead. In Interstellar, we see humanity’s “best” fail. And we see what we know to be God’s best for us, bound up in love and family, transcend every law of physics imaginable.

Love is a mystical but very real force in Interstellar. To see God behind it requires only one small step for moviegoers.

Interstellar has its problems, of course. Though it’s not designed to expand the PG-13 universe, the language can be sometimes a bit harsh, and flurries of violence are disquieting, especially given their unnatural-feeling contexts. And if that small step toward God I mentioned isn’t taken, the movie’s worldview becomes problematic as it sits undefined and unredeemed. So Interstellar is a film that practically demands discussion.

“Mankind was born on Earth,” Coop says, “but it was never meant to die here.” And the grandly scientific, often confusing concepts in Interstellar can’t be allowed to uncritically blink out of existence the minute we stand up during the credits either.