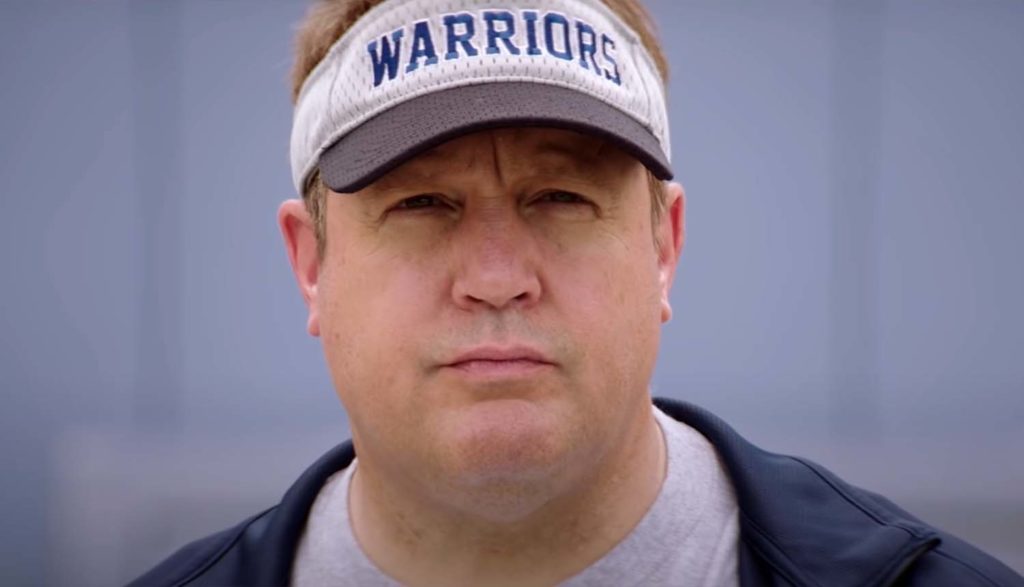 It’s 2012, and the world is ending. At least, it is for the New Orleans Saints Head Coach Sean Payton.

Three years after leading the Saints to their first Super Bowl victory in 2009, Payton is suspended for the entire 2012 National Football League season due to his alleged involvement in the “Bountygate” scandal.  Players on the Saints were allegedly being paid bonuses to target and injure players on opposing teams.

Now, Sean Payton’s face is all over the news … and he’s unexpectedly got a year off.

But things aren’t all bad: The extended vacation Sean’s received gives him time to visit Argyle, Texas. There, he reconnects with his 12-year-old son, Connor, who lives with his mother and Sean’s ex-wife, Beth. But Sean’s been away too long for Connor’s liking, and the boy would love nothing better than for his workaholic dad to take a hike.

However, there’s one neutral zone where Sean can reconnect with Connor. The teen plays for the hometown football team, the Warriors … and they’re a total mess. It’s standard practice for their team to lose via mercy rule, for instance. When one team gets 40 points ahead, the game automatically ends.

With nothing better to do and a relationship to rebuild with his son, Sean steps in as the team’s offensive coordinator.

But it isn’t easy for an NFL coach to suddenly tackle middle school football. It also doesn’t help that Sean’s desire to win can steamroll everyone in his way. Oh yeah, and don’t forget that everyone has something negative to say about Sean’s decisions.

With all that against him, there are a lot of things Sean is scrambling to fix. Is it possible to save the Warriors? Can he ever restore his standing with the NFL? And, most importantly, can he redeem his relationship with his son?

Or will he fumble it all away again?

Home Team offers a lovely look into humility in leadership. Sean is an effective leader, and his plans almost always work. But the same can be said of a tyrant and a dictator, which Sean—given his eyes set on the win—can easily morph into. Yes, it’s Sean Payton, and everyone’s going to listen to him. But in time (and after a much-needed rebuke by his son), Sean humbles himself, which allows others to experience the growth they need—even if it may mean that they don’t win.

Team Coach Troy Lambert stands as the antithesis of Sean. He wants the kids to have fun and enjoy the game, but he can’t seem to mesh those ideals with a winning strategy. This contrasts well against Sean’s no-nonsense-all-work-and-no-fun strategy, and we come to realize that there is value and merit in a combination of both approaches. We should strive to enjoy what we do and have fun, but we should also be willing to recognize when necessary changes need to be made and work needs to be done.

The players on the football team itself also provide the audience with positive messages. They’re supportive of each other, and they’re not afraid to help one another out with their personal struggles. Though they’re not afraid to poke fun at one another, they always maintain a cohesive unity that shows the value of having like-minded friends there to support you. As Proverbs 27:9b reminds us, “The sweetness of a friend comes from his earnest counsel.”

Two New Orleans Saints football fans are dressed like Catholic priests. One player makes the sign of the cross and thanks God that they don’t have to play a certain team again.

Beth’s new husband, Jamie, practices “transcendental meditation” with candles, incense and a recorder. We also see him sitting in the classic Eastern meditation pose with his legs crossed.

We hear a song (more on that below) with lyrics that reference angel choirs. In addition, Blake Shelton’s “Boys ‘Round Here” plays, and we hear a reference to prayer.

One of the young players on the Warriors has a crush on a girl at school. He’s constantly distracted during games, looking at her up in the stands. At one point the entire football team joins him to serenade the girl with the fun. song “We Are Young.”

Jaime talks about backpacking through Asia with people he thought were women but turned out to be men—a story his wife interrupts and stops as he’s telling it to Connor. and he references a time when he went into a bathhouse with sumo wrestlers who “prune everywhere.” In one scene, Beth wears a somewhat revealing dress.

A hotel staff member named Eric asks if can swim in his underwear. Eric also shows Sean a photo of his baby “mid-birth,” and Sean comments that Eric’s wife wouldn’t appreciate him showing others that photo.

A woman whose son is on the team makes several thinly veiled and suggestive passes at Sean (which he declines).

Even though this is a football movie that focuses on kids, you can still expect to see plenty of rough hits and tackles. This is particularly true whenever the Warriors have to face off against the Porcupines, the movie’s antagonists.

Coach Mitch says he’ll snap the neck of whoever threw Sean’s hat. Mitch forcibly grabs and drags his nephew by the neck while calling him “an embarrassment to the family tree.”

Troy kicks an older assistant coach named Mitch for laughing at a player falling down. The team accidentally sets a car on fire with a paper lantern.

Three uses of “a–” are heard, as are three variations of “crap.” There are two uses of “d–n,” and there are six uses of “h—.” The s-word is used once in a background song. God’s name is misused seven times. Twice, kids use the vulgar expression “suck it.”

Throughout the film, one player continues to get hit in the backside with the football, loudly exclaiming “my butthole” each time.

Sean drinks throughout the film. He and Troy bond over beers, a woman offers Sean wine, and Eric gives Sean a drink at the hotel bar. Additionally, Sean references drinking a scotch.

It is revealed that Mitch is not allowed to drive due to a drinking problem. We see Mitch drink alcohol out of his water bottle at a football game, and another character must help him walk to get water.

In a particularly gross scene, the entire team ingests homemade food made by Jamie, which causes them to projectile vomit on the field and their opponents. They use this to their advantage, barfing on defenders in order to score a touchdown. Many other characters throw up upon seeing the team members lose their collective lunches all over the field.

The comedy about the underdog sports team with the initially-angry-but-softens-up-over-time coach isn’t a new trope. But to my knowledge, this is the first time projectile vomit has been used as an essential plot device … I’m not sure how I feel about that.

Then again, this movie was produced by Happy Madison Productions, the company founded by Adam Sandler known for Grown Ups, Pixels, Paul Blart: Mall Cop and more. As such, viewers of Home Team can expect to see humor similar to those movies.

However, Home Team’s humorous bits are a bit more low key compared to many other movies on Kevin James’ resume. Its main goal is to try to tell a story of Sean Payton’s ultimately redemptive relationship with his son Connor, which is sweet and quite difficult to make humorous.

Thus, most of the jokes here come from other side characters or quick one-liners. Throughout, the story dances on the line between Adam Sandler-style humor and serious fatherly redemption. This leaves us in an awkward place where we unfortunately don’t get to receive the full benefits of either genre. For instance, many of the issues the individual characters face don’t ever feel like they are truly resolved—in fact, one character who struggles with the fear of tackling and being tackled is simply forgotten about halfway through the film, and overcoming this struggle is simply never mentioned ever again.

But even if the movie struggles to decide which genre it wants to be, it still delivers some solid messages about failure, fatherhood and second chance. The story itself hinges on uncovering what Sean’s true motivations really are: Does he simply want to redeem himself with the NFL and leave the first chance he gets, or is he truly there to better his relationship with his son?

Ultimately, the audience knows what Sean should choose, but it’ll take the struggling coach and father a bit of time to recognize it. Along the way, we’ll meander through poignant moments and puke-filled ones in equal measure in a story that gently encourages struggling dads to hang in there and keep trying.