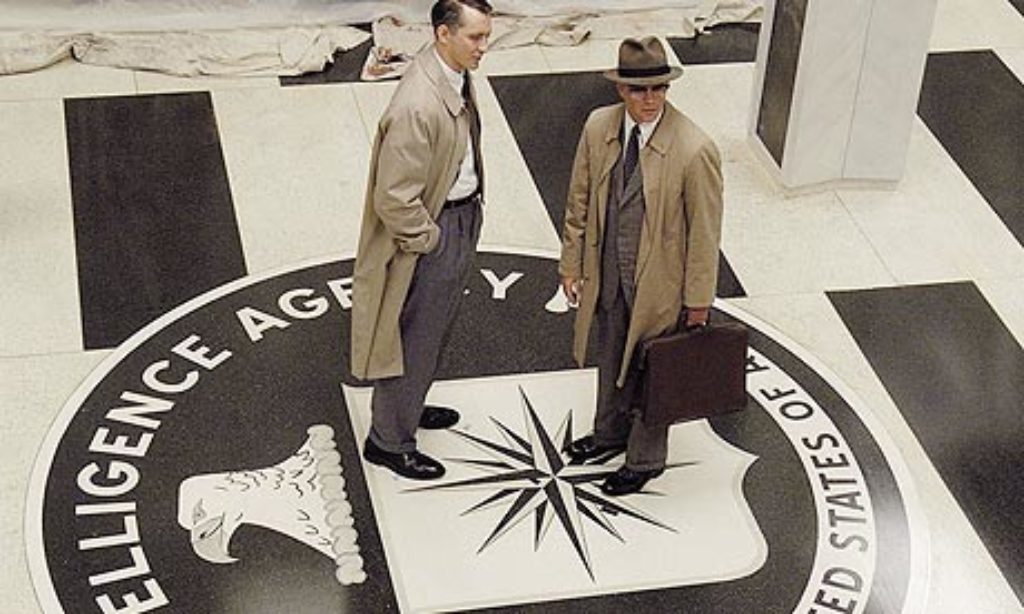 After joining the power-brokering and ultra-secret Skull and Bones society while a student at Yale, Edward Wilson is recruited into counter-intelligence for the U.S. Office of Strategic Services by General Sullivan just prior to America’s entering World War II. We learn early on that Edward’s father, an admiral, was a traitor who committed suicide when Edward was a boy. Now in his 20s, Edward is emotionally controlled, detail-oriented, patriotic, and a perfect candidate for the secrecy and duplicity of intelligence work. His one emotional attachment is to a deaf girl, a fellow student at Yale. However, when a one-night stand with his best friend’s sister leads to her pregnancy, a quick wedding follows. A week later, Edward leaves for his assignment in Europe, not to return to his wife, Clover, and their son, Edward Jr., until the war ends five long years later.

Edward is next called on by General Sullivan to head up counter-intelligence for the newly formed Central Intelligence Agency. At the expense of his family and, really, all of his relationships, Edward spends the rest of his life buried in the work of the cold war era CIA. Along the way, he duels with his counterpart in Russian intelligence, makes use of a questionable but high-ranking Russian defector and eventually tracks down a leak inside the CIA responsible for the Cuban Bay of Pigs fiasco.

Although his commitment comes at the expense of his family and, occasionally, his ethics, Edward tirelessly (if somewhat joylessly) sacrifices himself to frustrate America’s enemies and secure her safety and freedom. Thus, in what may be pointed to as one of the film’s most positive messages, Edward’s story exposes the limits and illustrates the sometimes negative impact of using deception and secrecy in an attempt to accomplish positive outcomes.

A reverend says grace at two retreats for members of the Skull and Bones. Clover notes both times that God is acknowledged after the salute to the secret society. General Sullivan states that the OSS is not looking for Jews, Negroes or (very many) Catholics. Later, he admits he believes in a just God and, thus, he feels that he must always err on the side of democracy.

At a meeting between Edward and a Russian spy at a museum, a kids’ choir can be heard singing nearby, “He’s Got the Whole World in His Hands.” Late in the film, Edward notices an inscription inside the newly built CIA building. It’s a quote from John 8:32: “And ye shall know the truth, and the truth shall make you free.” He’s not impressed. A colleague’s answer to a question about why “the” is never used to modify CIA involves him comparing the agency to God.

Pivotal to the movie’s plot are some grainy, indistinct black-and-white photos that accompany a surveillance audio recording of a couple having sex. The unidentified male seems to be distributing classified information. While at Yale, Edward spurns the sexual advance of a male poetry professor, a man later made to suffer for his refusal to stop having sex with younger men. To become initiated into the Skull and Bones, Edward engages in nude (but non-sexual) mud wrestling with other male initiates; an upperclassmen urinates on them from above. Also nude, Edward lounges on an altar of sorts and tell the group a deep secret. Brief rear nudity is glimpsed in both scenes.

Edward welcomes an invitation to sex from a girlfriend, but she changes her mind before they get very far. However, we do see Edward indulge in three sexual encounters over the course of his life, complete with movement, sexual sounds and partial female breast nudity. Each act leads to harsh negative consequences for Edward, including pregnancy, an unwelcome wedding, the near-dissolution of a marriage, and even an assassination.

In a flashback, Edward is a boy when he hears a gunshot and discovers the dead body of his father. Some blood is seen. Over the course of Edward’s career, he is connected to the deaths of several people: a man attacked by thugs screams horrifically before his body is tossed in a river; another jumps to his death from a window resulting in a pool of blood on the sidewalk; a woman is shot and killed at close range (blood is again visible); another is thrown to her death from a plane; a suspected spy is brutally beaten, stripped naked and tortured with a water-boarding technique. An amputated finger is delivered to send a message.

In addition to about a half-dozen uses of the f-word, milder profanities include “h—,” “d–n” and “a–.” Crude euphemisms evoke sexual organs and bodily functions.

In the 1940s and ’50s, smoking is common among most of the characters. One man still smoking in the early ’60s looks pretty sick and blames the cigarettes. Drinking is also common, especially at social functions. Clover develops a drinking problem and often appears to be somewhat inebriated. LSD is used as a kind of truth serum during an interrogation.

In a rare moment of revealing his own thoughts, Edward says that all the ethnic and religious groups other than white protestants are “just visiting” America. An Italian gangster Edward consults for intelligence invokes the n-word.

Robert De Niro’s second feature-length directing effort is as intricately detailed and finely crafted as an elegant timepiece. The writing (which pushes the story back and forth through time), the acting, and the period sets and costuming all move together with precision. Unfortunately, although the story is historically fascinating and revolves around meaningful themes of truthfulness, family, patriotism and the value of espionage, it lacks emotional resonance. That void—along with scenes that include obscene language, brief sex and/or realistic violence—left me checking my timepiece long before the nearly three-hour film had wound down.

Among the large, recognizable cast, Matt Damon is especially convincing and consistent as Edward, a man who rarely gives anything about himself away. No sentiment. No information. Very few hints as to motive or desire. While making him perfect for the spy game, it cripples him as a husband and father—and possibly as a protagonist. The stolid emotional remove makes it tough to empathize with him as the hero (antihero?) of his own sprawling history.

To his credit, De Niro refuses to ever apply a veneer of glitz to the CIA or unduly lionize its founding members. For instance, when a Russian spymaster attempts to engage Edward in the traditional movie-style banter between rival spooks, Edward barely says a word. It’s never a game for him. Or for the viewer.

Understanding that mindset actually helps compensate for all the coldness and detachment flowing from the screen, and unearths the power of the underlying (and tangled) lessons learned and questions raised. Edward is a man committed at his core to truth who spends his life constructing falsehoods. And in attempting to reverse the sins of his father’s betrayal of his nation, Edward repeats and builds on the man’s crimes against his family. It’s a desperate tragedy … that left me strangely unmoved, due in large part to the fact that the devastation seems to leave no mark on the central character himself.

A final file entry: The Good Shepherd refuses to ever endorse the rightness or wrongness of the CIA’s actions. Its point of view is expressed by De Niro himself as General Sullivan, the organization’s creator. He cites espionage and counter-intelligence as a necessary evil, one that must be both wielded and checked by civilian government. Then De Niro helps us see how the necessity and the evil walk hand-in-hand in Edward’s life. He forces the question of whether systematic falsehood can really be effectively and morally utilized for the good of a nation. And his story has the cold-hearted power to strengthen our personal resolve to tell the truth always and never to sacrifice our families for the sake of an undeserving mission.