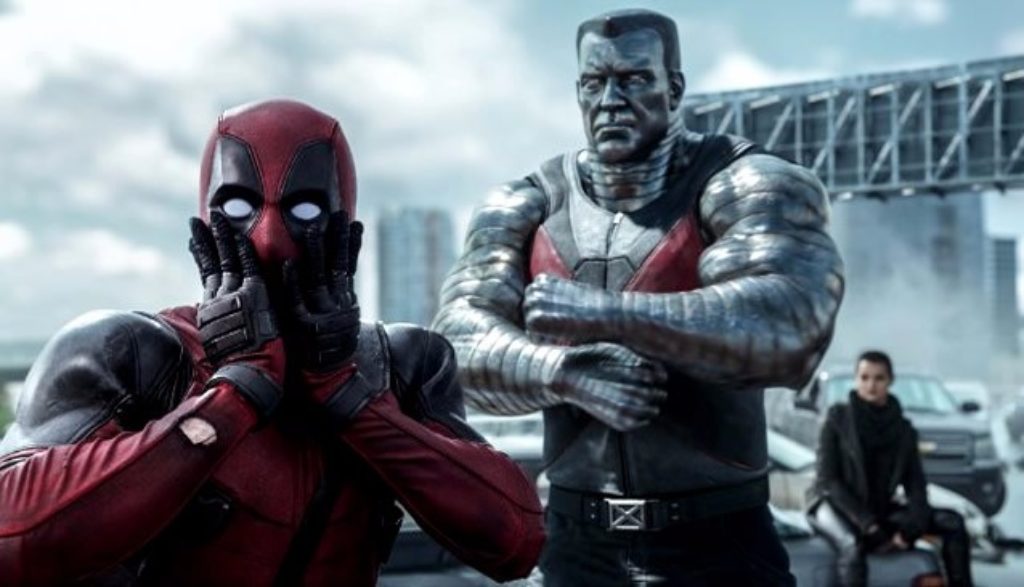 Unless, y’know, you don’t want all that responsibility. Because hey, you’ve got great power! Who’s going to make you be responsible if you don’t wanna?

It’s not like Wade Wilson ever asked to be a superhero. Back before he went through his (ahem) change, Wade was just a former special ops expert (read: he was dishonorably discharged) trying to make ends meet by threatening, beating and maiming people upon request. “I’m just a bad guy who gets paid to f— up worse guys,” he says, and it’s true.

But then Wade ran smack into two things that changed his life forever: Vanessa, whom he fell in love with, and cancer, which he didn’t. It was strangely ironic that one came so swiftly on the heels of the other. Had Wade never met Vanessa, maybe he wouldn’t have minded the terminal disease so much. I mean, it’s not like the guy was doing much with his life anyway. But now, when he has so much to live for, it seems like a terrible cosmic joke to suddenly be so close to death.

So Wade does what any guy who lives in the Marvel universe would do: He signs up with a shady organization that promises to conduct a bevy of super-secret procedures on him. If successful, Wade will be a new man—and perhaps in more ways than just being cancer-free. And if they’re not, well, he’ll be dead. But no deader than he’d be without ’em. What does Wade have to lose?

His soul, as it turns out. This shady organization isn’t just trying to avoid government red tape or hide some back taxes. It’s trying to create an army of evil super-soldiers in the hopes that they’ll … well, do all sorts of evil, super-soldier stuff.

And the procedures are just torture. I mean that quite literally. The juice given to Wade only reacts under the most stressful of situations: If Wade suffers through enough stress, the chemicals will cause his body to mutate, which’ll destroy the cancer and give him superpowers. And the clinic’s head tormentor, Ajax, can’t stand Wade. Which makes conditions ideal for generating the stress we were just talking about.

It seems at first like Wade’s doomed to spend whatever time he has left in a cacophony of pain, but he does finally mutate. The cancer vanishes, and his body is chemically blessed with the ability to heal super-rapidly. Injuries still hurt him, but everything from paper cuts to severed hands will heal in a jiffy.

Unfortunately, the mutation also completely ruins Wade’s complexion—a big deal for someone as handsome and shallow as he. And after the clinic burns down around his ankles, Wade feels insufficiently pretty to go back to Vanessa.

Time to go find Ajax and make the guy fix his face—even if Wade has to kill every single one of Ajax’s evil super-soldiers in the process.

We’ve covered that Wade—Deadpool when he’s in costume—is not a great guy. But his love for Vanessa is no lie. They’re strangely (if a bit dysfunctionally) compatible, and their mutual affection is what drives this story along. While they have scads of premarital sex during their courtship (which we’ll rail against a bit later), at least Wade proposes, wanting to make an honest woman of her.

Much more admirable is Colossus, a massive metal man hailing from Russia. One of the official X-Men, Colossus takes his role as a superhero seriously. He tries to be magnanimous to his enemies and courteous to the public. He attempts again and again to pull Deadpool into the light of truth, justice and a better way. He encourages Deadpool to join the X-Men in the hopes that some group counseling might help the guy shape up and fly right.

It all falls on Deadpool’s dead ears, of course, but let’s give Colossus cred for trying.

In a montage, we see Wade and Vanessa celebrate various holidays with sex—except Lent, where they’re shown peacefully sitting side by side and reading. In the opening credits, someone is said to be “God’s perfect idiot.”

OK. When it’s not Lent, the camera can’t seem to get enough of staring at sexual movements and suggestive skin. We see Wade and Vanessa participating in obvious, noisy, intentionally humorous and oft-repeated sex. They also talk a great deal about the sex they’re having or the sex they plan to have, invoking all manner of sexual organs, positions and stimuli. When proposing to Vanessa, Wade offers her a Ring Pop—which he’s been apparently storing in an unmentionable place.

Vanessa, it should be said here, is an exotic dancer and prostitute. Indeed, Wade pays her for their first encounter. And while he insists they spend most of that “date” talking, they end it doing, shall we say, more physical activity. We see Vanessa work at a strip club wherein women writhe about in various stages of undress. At least one dancer, fully nude, is shown from the front, while others are seen bare-breasted. Wade’s body is also showcased. He battles a bad guy while nude. And elsewhere, the camera zooms in on his bare backside and ogles his spandex-wrapped front side. We see Deadpool yanking down an adversary’s pants, revealing a portion of posterior.

As a special-ops guy, Wade already accumulated “41 confirmed kills.” By the time he confronts a crucial guy in Ajax’s operation, he’s tallied 89 (“Soon to be 90,” he says darkly). This is clearly not a man who adheres to Batman’s no-kill ethos, and we see him dispatch his foes in a variety of splattery ways.

He shoots several people in the head (with three of the bloodiest kills completed with one messy bullet), stabs and slashes others with a sword and, it’s suggested, mows one dude down with a Zamboni. Somebody gets flung into a freeway sign, splatting like an uncooked egg across its surface. Deadpool burns a man with a cigarette lighter before killing him. And he just keeps on pulling the trigger, even when better heroes than he beg for him to show a little mercy.

In the clinic, Ajax uses a variety of methods to spur Wade’s mutation, including beating him bloody (while he’s strapped to a gurney), submerging him in goo, forcing him to float for hours in ice, and waterboarding him. Wade and other patients are regularly shown to be bloody and bruised. He and others are locked in a tank that regulates the flow of oxygen in such a way that it constantly feels like you’re suffocating—and Wade is forced to stay in that container for a full weekend. Things get no better for him once he develops his ability to heal quickly: He’s stabbed in the chest and shoulder with a huge iron bar that’s fashioned into a hook so he can’t get free. He’s shot several times, and he peers, at one juncture, through a bullet hole in his wrist. (He makes his Deadpool suit red to keep his enemies from seeing him bleed.) Both of his hands and his leg are grotesquely broken while he’s fighting Colossus. In handcuffs, he saws off his own hand to escape. A bullet pierces his backside.

Cabbie Dopinder apparently kidnaps his more successful, more handsome cousin and is holding him captive in the trunk of his taxi. A collision suggests that the guy gets killed. (This after Deadpool suggests that Dopinder should kill his cousin and kidnap the guy’s girlfriend—who just so happens to be the love of Dopinder’s life.)

Wade spends a lot of time in the bar that Weasel owns. He enjoys ordering a frothy drink bearing a crude name (just to make Weasel say it), and he buys everyone a round at one point. Partyers drink. Vanessa serves the stuff at the strip club. There are a couple of references to cocaine. Someone smokes a cigarette.

Wade is shown using a urinal. He jokes about defecation.

Marvel has been incredibly successful in making the world embrace its legion of superheroes. And from Spider-Man to The Avengers to The X-Men, they’ve come to rely on a teen-friendly movie rating to keep families coming back for more.

Not that Deadpool would ever agree to such a strategy.

Never mind that this flick is being distributed by 20th Century Fox instead of Disney’s Marvel. Given the comic book company’s recent history, there may be certain fans who look at Deadpool’s R rating and wonder … Does it have just a wee bit more language? Just a touch more violence? How bad could a Marvel superhero movie be?

So I will answer: Bad. Really bad.

The tone of the movie is surprisingly light and witty—an inside joke of sorts, both an homage to and sendup of all things superhero done inside Marvel’s own studios. But the flick dives to the level of its hard-core rating in the first 10 minutes and keeps drilling down from there. It doesn’t just ease over into “restricted” territory—it flies past the barrier at supersonic speed as if trapped in a defective Iron Man suit. And that’s a shame, because much of the movie’s sly sense of humor doesn’t depend on foul content at all.

But cut out all the crazy content and you’ve got about a 20-minute movie.

With great power comes great responsibility. That’s what Spider-Man taught us. But Deadpool is as irresponsible as they come.