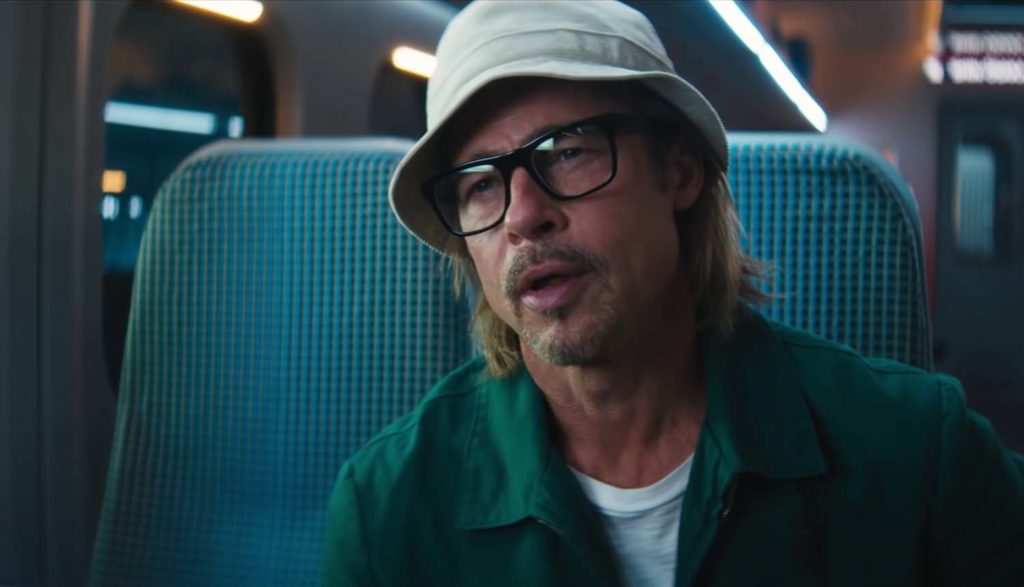 Ladybug just has the worst luck, which is arguably the most unfortunate character trait for someone working as an assassin.

“My bad luck is biblical. I’m not even trying to kill people, and someone dies,” Ladybug laments.

Well, after a sabbatical to go to therapy for all of his misfortune and messy missions, Ladybug is ready to take on a simple and straightforward job for his first day back. It’s a quick snatch-and-grab: Hop on a bullet train, steal a briefcase containing $10 million, and hop off.

And in a way, she’s right. It doesn’t get simpler. It actually gets way more difficult. Because as misfortune would have it, Ladybug’s not the only assassin on that bullet train—there’s actually a whole lot of them. And they’re all literally gunning for that briefcase.

Bullet Train is a wild ride from start to finish, but we can still appreciate a couple positive things within the film’s runtime.

Ladybug is a troubled man, both from his horrific luck and from the stress of his job. Because of this, he frequently mentions going to see a therapist, and he often attempts to apply his therapist’s advice to his life. He doesn’t actively want to kill people—nor is he ever the one to throw the first punch. He’s more of a particularly skilled hired hand than an actual assassin, and he only resorts to violence in self-defense. Instead, he tries to work diplomatically with other people and talk them down from their anger, even when they have murderous intent. Ladybug even forgives another man for a previous instance in which the man shot him.

A man tells his son that a father’s job is to protect his family. Another assassin has a knack for being able to read the hearts of other people, and he tells his partner when people seem good.

A prominent theme explored near the end of the movie deals with fate, and a couple characters discuss the validity of fate. A character tells Ladybug about spiritual beliefs regarding Ladybug’s codename. Ladybug describes his bad luck as “biblical.” Ladybug also exclaims that God hates him, and his handler replies, “No, she doesn’t.” Ladybug mocks a dying person, asking if they are religious.

A character has a tattoo of a cross, and we see a grave marked by a cross. A man jokingly asks if he is in hell. Gang members wear masks that appear to emulate an Oni, a demon from Japanese folklore.

A man and woman are briefly seen having sex, and the woman’s breasts are visible. In a flashback, an assassin and his girlfriend passionately kiss while in bed together, covered by the sheets. A man asks if a transaction is a “sex thing.” Someone says “God rest his soul.” A man is seen shirtless.

Bullet Train is, indeed, riddled with bullets, but it’s also filled with violence all the way up and down its track. If there’s any advice for new riders of this train, it is to get accustomed to the sight of blood.

We see many, many people die as these assassins fight, and they’ll die in a variety of gruesome ways. People are shot, stabbed, exploded, poisoned and more—and if we were to write about each instance, this section of our review could wrap around the world. With that in mind, here are a few of the more gruesome acts in which viewers will have to endure.

A blast causes a character to lose half their head, revealing the person’s brain. A goon is killed by a crowbar being thrust through his head, sending gore flying. Others are killed with machetes or swords in similar fashion as the camera refuses to look away. A person is cut in half by a protruding obstacle as he looks out of the train, and the top half of his body flies away onscreen. Several criminals are all stabbed or shot while their headquarters burns to the ground. A brief scene implies two men chopped up the bodies of their victims as we hear noises similar to that of a chainsaw.

We also see many people die as they are affected by a deadly venom which causes them to bleed from their eyes and vomit blood. A character is stabbed in the heart and hits the ground with a sickening snap of the neck. Another character bleeds profusely out of a bullet wound to the neck. A man is suffocated in a bag before having his throat cut. A man is run over by the train. A bellboy is seen trying to commit suicide by jumping off of a building (and the attempt is unsuccessful).

In other general instances of violence, a person is bitten by a snake. A bloodied boy is seen in the hospital, having been pushed off a roof by another person. A man is Tasered. Cars explode in fiery messes. We hear a reference to a cruel man cutting off a woman’s arm. An assassin beats up a man, and we see men die in a gunfight. A man is stabbed, and a bottle is hit against someone’s head. People are shot. Lengthy fist fights include the use of nearby objects. An explosion occurs. Someone is intentionally run over.

[Spoiler Warning] The train derails and crashes into a city.

We see gang members smoke cigars and cigarettes, and we see some of them drinking beers and other alcohol. People at a wedding drink wine and other drinks. Ladybug drugs a bottle of water with a heavy amount of sleeping powder. Ladybug describes his predicament as “bad luck on acid.” Someone uses snake antidote.

One of the assassins is described as a kleptomaniac, and we see him steal off of a food cart. Ladybug talks about excrement, and he is sprayed in the face while trying to operate a bidet.

Were I to use my fingers and toes to count the number of people who die in Bullet Train, I’d run out of digits far sooner than I’d run out of bodies to count. And that’s assuming the assassins in the film didn’t chop all of them off before I got to five.

Bullet Train presents itself as a sort of violent tango that its assassin protagonists dance—and with any misstep, they’ll reach their final destinations a bit sooner than their train ticket says. Their stories are intertwined with one another, but their goals are mutually exclusive. None of them can win without the others losing, and figuring out how they’re connected will be key to staying on the rails of this crazy train.

Indeed, the film is a unique and wild ride—one that feels as if Knives Out and Saw tried to bake a cake together. The former adds a cup of comical dialogue, a sprinkle of detective drama and a bit of over-the-top ridiculousness, and then the latter comes along and accidentally spills the entire expired bag of gory violence into the bowl.

That last ingredient is what’ll hang most potential viewers up. The plot is humorous, and the characters are well developed, but it’s hard to get past the overwhelming amount of hectic and gruesome violence pervading Bullet Train. Heads explode or are impaled, blood repaints the walls and people die from painful and graphic doses of venom. And that’s not even mentioning the frequent heavy swearing, with the use of the f-word alone reaching into the triple digits (which, to be fair, we wouldn’t expect people in the business of killing others to particularly care about what language they use).

And, in an effort to match the speed of an actual bullet train, the film almost never has a peaceful moment. The large majority of Bullet Train’s 2-hour runtime is action-packed and nonstop, and the viewer is simply along for the ride.

Does Bullet Train have fun and humorous moments? Most definitely. But it is also absolutely drenched in graphic violence that tends to put a damper on the fun and humorous and may make many instead reach for the emergency brake.