Four years ago, Jackie Justice was one of the top fighters in the Ultimate Fighting Championship league. She was 10-0 and headed for her first title fight when it all came crashing down.

Facing a bigger, stronger and more experienced woman, Jackie panicked and literally climbed out of the cage to escape her opponent.

Now, she’s the laughingstock of the mixed martial arts community. And even though her manager (and boyfriend), Desi, wants her to start fighting again, she’s just not ready.

But when her 5-year-old son shows up on her mother’s doorstep, Jackie realizes that she doesn’t really have a choice. She’s got to be the mother that Manny deserves—and the breadwinner they both need.

She already abandoned Manny once when he was an infant, leaving him in the care of his biological father. But now, his dad is dead (shot while working undercover). Jackie’s mom, Angel, isn’t capable of caring for the young boy, and Manny has no other family.

To make matters worse, Manny witnessed his dad’s murder. And as a result of the trauma, he isn’t talking to anyone.

Jackie can’t run away. Not this time. Not again.

And as it turns out, Jackie still has a lot of fight left in her. She just needed something more important than rage to fight for.

Jackie realizes that her entire life, she’s always run away from the things that scared her—her mom, her son, her career. But she manages to overcome those fears (and the urge to flee) when Manny is placed in her care. She wants to protect him from harm, not cause it. And her desire to provide for the boy drives her to make better decisions in her life (such as to stop drinking and to leave an abusive relationship).

Angel remarks that she doesn’t think her daughter is a fit adult, let alone a fit parent. And she voices her disappointment that Jackie can’t seem to handle her problems. She even takes custody of Manny when the boy runs away after Jackie shouts at him. However, Angel isn’t much better, allegedly allowing her daughter to be repeatedly raped as a teenager in order to pay rent (though Angel denies knowing this and claims Jackie is lying). But Jackie works hard to get her career back. And eventually, the two women reconcile, knowing that while neither of them is perfect, they’re both trying to be better.

Bobbi (Jackie’s female trainer) is kind to Manny, showing him ways to help him through his trauma. Jackie skips an important training session to be with Manny after a song triggers memories of his dad.

Bobbi chants in Sanskrit while meditating. She later teaches this to Manny, telling him that it’s a “special power” since it will allow him to go to a place in his mind that’s all his own.

Jackie and Bobbi have sex, and we see everything of the two women except their genitals. We see a couple making out outside of a fight club.

We see Jackie’s pants-less profile when she uses the toilet and when she and Desi have sex. We also see Desi’s uncovered backside a few times. Jackie showers, and we see her head and feet.

A teenage boy films Jackie while she is changing clothes (we see her bare back and the side of her breasts). Female fighters wear sports bras and tight shorts. Desi is often shirtless.

Bobbi says she used to be married to another woman. A woman says her son married another man, calling her son-in-law a “snack.” Jackie believes a large woman called the “Werewolf” is actually a man, but someone says the woman has no “pee-pee.” A woman puts a wig on a little boy and says he looks like a girl.

Jackie and other women participate in MMA fights, kicking, punching, wrestling, etc. Blood is often present in these fights. The commentators can be graphic in their descriptions. And we see Jackie covered in cuts and bruises throughout the film.

During a “basement brawl” (where there are “no refs, no rules”), a large woman brutally beats another unconscious, bloodying her face. Later, Jackie fights the woman after she spits alcohol in Jackie’s face. Jackie smashes a glass against her head and beats the woman into submission. Desi tries to stop the fight but is held back by cheering onlookers.

Desi is abusive. He constantly screams at Jackie and Manny, hits Jackie on at least one occasion and is rough with her and Manny throughout. (He hits a wall while screaming at Jackie and smashes a keyboard that she bought for Manny.) But Jackie promises Manny to never let Desi hurt him, physically placing herself between Desi and the boy to prevent Desi from touching him.

There’s an uncomfortable scene where Desi kisses Jackie roughly and she doesn’t return his affections. He pressures her, removes her pants and they proceed to have sex, but Jackie’s non-responsiveness makes this feel nonconsensual. And since we later learn that Jackie was raped growing up by several of her mom’s boyfriends (as well as her uncle), this scene becomes even more poignant. Especially since we overhear an argument where Jackie is trying to push Desi off of her but he is pressuring her to kiss him.

A woman knocks a teenage boy down and smashes his phone after catching him filming her inappropriately.

A man said he went to prison when he was 16 for murder, and he claims he actually killed more people.

People drink and smoke throughout. We see ads for cigarettes and liquor.

Jackie, Angel and Desi all struggle with alcohol abuse. (Angel also “pops pills.”) It’s implied that Desi has cut Jackie off from booze since he keeps it locked in a cabinet. But Jackie steals his key and pours liquor into an empty bottle of cleaning fluid, spraying it into her mouth in secret. At one point, Jackie pours all of Desi’s liquor bottles down the drain, but she keeps her secret bottle hidden.

Bobbi says she doesn’t drink because she had a choice to either drink or live a life and she chose to have a life. However, after Jackie breaks up with her, she takes a bottle of liquor as she leaves. And the next day, Bobbi shows up with a broken arm and several cuts and bruises from an incident that happened while she was drunk.

People mock Jackie throughout the film for running away from a fight. Desi is angry with her for not fighting since he gave up managing all his other fighters so he could focus on her. But we later learn that nobody wants Desi to manage them because they think he forced her to fight someone when she wasn’t ready.

When Jackie switches to a new manager, she thinks it will be better since he seems to care more. However, he eventually proves to be using her for money as well. He purposely does things to make her mad (since she’s a better fighter when she’s in a rage) and berates her for taking a day off to be with Manny.

Manny acts out, throwing toys on the floor in frustration. He also nearly sets the kitchen on fire (accidentally) while trying to prove he can cook food for himself.

We learn that Manny’s dad told him that Jackie had died. We hear that Jackie spent some time in juvenile detention and was abandoned by her own dad. Jackie yells at Manny while having a panic attack, scaring the boy and hurting his feelings.

Some boys laugh at Manny when he accidentally urinates in his pants. A woman vomits.

In one way, Bruised is a powerful story about a woman who’s been knocked down—physically and metaphorically—in life. She’s been beaten and bruised. But in order to provide her son with a better life than the one she had, she’s willing to (quite literally) fight for him—no matter what it takes.

Unfortunately, this R-rated film pushes even those boundaries with its inappropriate content.

The f-word count alone reaches 100. There’s an intimate scene between two women. The fighting we witness inside the UFC ring is graphic (though that’s to be expected; the sport is pretty violent itself). And then we’re forced to watch a very rapey scene between Jackie and Desi—especially discomforting since we know that Jackie was sexually assaulted as a child. Desi physically abuses her and threatens to abuse her son as well.

The film tries to be an inspiring tale for single mothers, especially those who might have experienced similar abuse to Jackie’s. And for some who watch, Bruised may succeed. But when I watch everything play out on screen, I can’t help but think there was a less explicit way of telling her story. 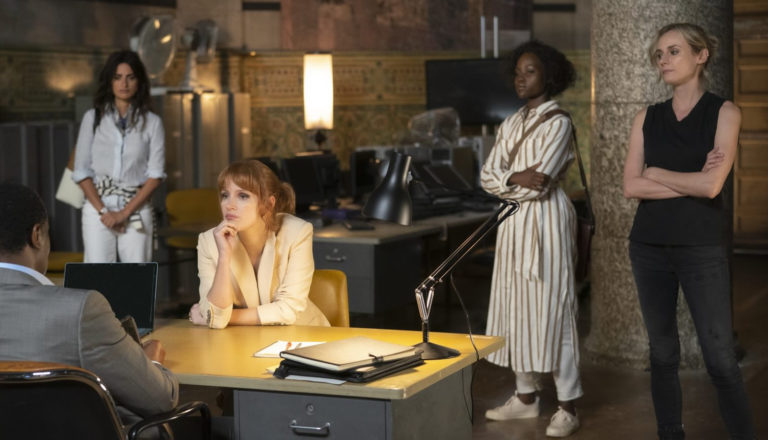