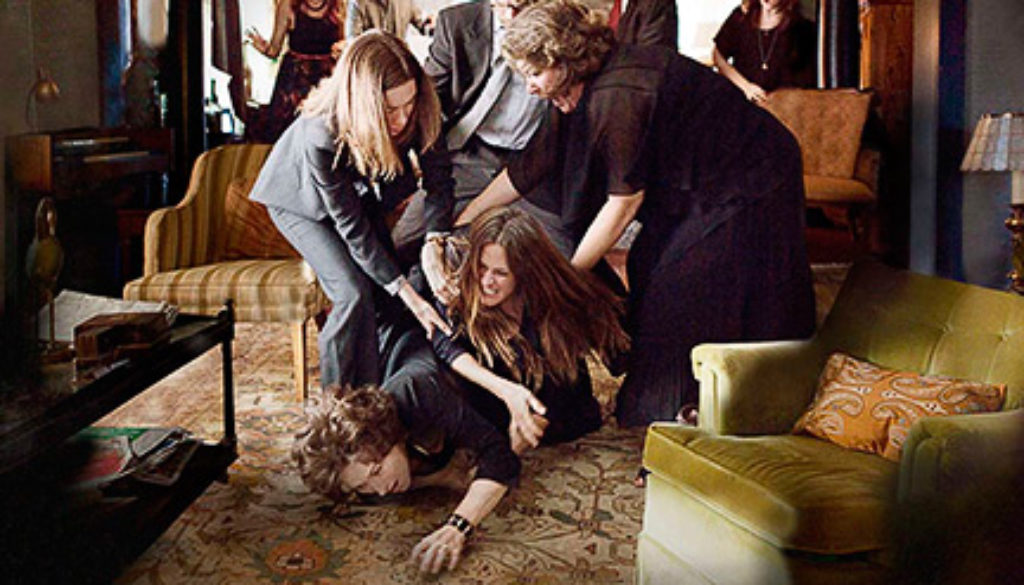 Violet Weston is like the Oklahoma plains that surround her—proud, hard, unforgiving. She can be as terrible as a tornado, as blistering as an August afternoon. There is a certain hard-earned beauty about her, yes. But it takes work to see it. And even when it’s unearthed, it quickly disappears again—here and gone like a prairie thunderstorm.

She suffers from mouth cancer and has made it her mission in life to make the world around her feel her pain. Her only solace is a bevy of pills, and that makes her even worse to be around. And, sadly, that might be one of the reasons her husband just killed himself.

Now Violet’s three daughters must come around this burning coal of a woman—help her and comfort her as best they can. Barb brings her estranged husband and teenage daughter in from Denver. Karen returns from Florida with her sports-car-driving fiancé, Steve. Ivy—the long-suffering, nearly invisible daughter who never left, well, doesn’t need to return. And then there’s Violet’s sister Mattie Fae, her genial husband, Charlie, and guileless grown son, “Small Charles,” in tow.

Most of these guests know Violet well. They know what they’re in for, the misery to come, even as they hope that this time things’ll be different somehow.

But Violet cares not a whit for different, nor for her family’s need for comfort and closure. She means to tell the terrible truth (as she sees it), to force her daughters to feel even more of her own pain and anguish. The family stands in front of an F5 twister now—a drugged-up force of nature who seems bent on sweeping them all away. There’s not a shelter in the state that can shield them from this storm.

Family is a good thing, right? Most of us believe that a healthy family is the key to healthy kids, a healthy society. We talk about the positive role parents can play in the lives of their children, the joy children can bring to their parents. Family is, quite literally, sacred.

But some families can break bad, becoming toxic, and Violet Weston’s brood is a prime example of that.

This isn’t a positive thing, of course. And August: Osage County is often painful to watch because of this particular family’s overwhelming dysfunction. And yet the story can be viewed as a cautionary tale, an exercise in addition by subtraction. Through Violet, Mattie Fae and Barb, we see what can happen when our righteous anger (misplaced or no) is never mitigated by grace and forgiveness. Through Barb’s pot-smoking 14-year-old daughter, Jean, we may be encouraged to instill better values in our own kids. In the midst of this horribly wounded family, we hopefully see—through the very things the Westons lack—how best to mend our own familial wounds and, if we’re fortunate, find the tools to make our families that much better. Certainly better than the Westons’.

The Westons are nominally Christian. The funeral is held at a church, and when the family gathers at the table, Charlie says an awkward, long-winded prayer. (Most everyone winds up peeking or giggling or rolling their eyes.) There’s a bit of talk about the afterlife, that it doesn’t allow for spite. There’s also talk of a young couple breaking into a church to spend the night drinking and kissing.

Several critical and explosive plot points are predicated on salacious family secrets, including incest and extramarital affairs. We hear about, without seeing, quite a lot of sexual activity. But there’s a visual exception that requires both documentation and a spoiler warning: Steve, Karen’s well-coifed and slimy beau, makes moves on 14-year-old Jean. He asks how old she is (she tells him truthfully), then later essentially seduces her with the promise of pot. Someone in the house overhears them giggling in the yard late at night, Steve asking Jean if he can “see them” (context making it clear he’s talking about her breasts). The camera catches him embracing her, his shirt unbuttoned and his hand caressing her back underneath her shirt. (They are discovered and the encounter is swiftly and embarrassingly terminated.) Karen, then, despite catching her man with a 14-year-old is determined to forgive Steve and hold onto her dream that they can still honeymoon in Belize.

Barb tackles Violet during the funeral dinner, trying to pry a bottle of pills out of her hands. The two wrestle on the ground. Barb slaps her daughter across the face. Several threats are made. People throw and break dishes.

Violet tells of how she was once attacked by a suitor when they were younger: Mattie Fae tried to protect Violet and now bears scars from a hammer claw on her scalp. Steve is attacked by someone wielding a shovel.

As noted, Violet’s husband, Beverly, commits suicide. We see him launch a boat into the water, then the camera shows the vessel floating empty; we see parts of his lifeless body in close-up shots.

We hear that several parakeets died in the Weston house because of the heat—a metaphor, perhaps, for Violet’s own smothering poison. We hear Jean’s theory that animals are scared when they’re slaughtered, a fear that’s then transmitted to anyone who consumes meat.

Beverly accepted Violet’s drug habit as just part of their marriage: “She takes pills, and I drink,” he says, joking that this understanding is documented on their marriage certificate, and lists the litany of chemicals she uses. She’s repeatedly shown high, sometimes dancing with herself, sometimes unable to pronounce words. When she admits to her family she’s a drug addict (brandishing a bottle of her “best friends” as proof), Barb takes charge, flushing all the pills they can find down the toilet and confronting the doctor who prescribed most of them (throwing the empty bottles at him). The doctor says that because of the medication Violet may now have permanent brain damage.

We learn that Violet got off these drugs once and went to rehab. It was a horrible experience for her, and Barb tells a story of how her mother once smuggled a bottle of pills into the facility in her vagina. Violet thereafter swore she’d never go back to rehab and tells Barb that as long as there are no pills available, she’ll be fine (while admitting she might have a few still stashed). When one of Barb’s sisters asks whether their mother’s clean, Barb says, “Clean enough.”

Not that Violet’s the only one with substance-abuse issues. As mentioned, Steve shares pot with Jean (teaching her how to “shotgun”), and we’re told that Charlie can stand living with Mattie Fae only because he smokes “a lot of grass.” He drinks beer while watching a baseball game; Mattie Fae pours herself some whiskey and calls it a cocktail. Other people drink wine and/or hard liquor, and Beverly drank extraordinarily heavily. Violet tells a story about Beverly drinking an entire bottle of liquor before giving a speech (he was a poet) and subsequently “fouling himself” at the podium. Violet and others smoke cigarettes.

The people here—particularly the women—mock and denigrate their children to an embarrassing degree. Jean speaks disrespectfully to her parents. She’s mercilessly mocked by her relatives for not eating meat. An American Indian cook is subjected to demeaning stereotypes by Violet.

Violet throws up on the side of the road.

When Violet was a young girl, she longed for a pair of cowboy boots—boots that matched those of her young beau. She begged for those boots, pleaded for them, told her mother they were all she wanted for Christmas.

Come Christmas morning, a boot box sat underneath the tree. Violet was so excited: She ripped off the paper, flung open the box … and found a pair of work boots, worn and ratty, dirt caked in the tread.

“My mama laughed about it for days,” she recalls. And with that, we have a clearer insight into where Violet’s own thread of mean came from.

The Bible soberly tells us (in Exodus, Numbers and Deuteronomy) that the sins of the fathers will be visited upon the children “to the third and fourth generations.” It seems true of mothers too. Violet’s mother could be sadistic. Both Violet and sister Mattie Fae can tear into their kids like rabid jackals. And Barb begins to see more and more of her mom taking root in her own relationships—the volcanic anger, the brutal “truth-telling,” the rigid, unforgiving standards she holds people to. Her husband says he’ll always love her, but that she’s “hard.” And after Mattie Fae unleashes a scalding attack on her son, Small Charles, Charlie comes to the young man’s defense: I love you, he tells his wife, saying he wouldn’t trade their 38 years together for anything. “But if you don’t find a generous place in your heart for your own son, we’re not going to make it to 39.”

It brings to mind another verse, this one found in Proverbs 22: “Whoever sows injustice will reap calamity, and the rod of his fury will fail.”

August: Osage County has been called a comedy by some. But while it may contain some humorous moments, this is actually pure Old Testament tragedy. The characters who seek to mete out justice on their own terms are handed justice on those same terms. Those who show no mercy are shown none. Even Violet’s mouth cancer seems a poetic judgment for her sins, given that her mouth is the source of so many of her and her family’s problems. Grace and forgiveness are attributes of a strong, healthy family—and they’re rarely seen in this neck of Osage County.

As such, let’s give a little grace and forgiveness to this movie and take a moment to praise it for its undeniable artistry. Meryl Streep and Julia Roberts are both incredible here. And the supporting cast is spot-on. Certainly this film (adapted from the 2008 Pulitzer Prize-winning play) has more than its share of great lines that cut to the heart of the human condition.

But boy is that heart ugly. Even beyond the sordid sexual themes and foul language (which feels all the more harsh because of its familial intimacy), this is a dark, dark movie where people treat each other horribly.

Before the credits roll, almost everybody who can leaves Osage County as fast as they can. And I can’t say that I blame them.