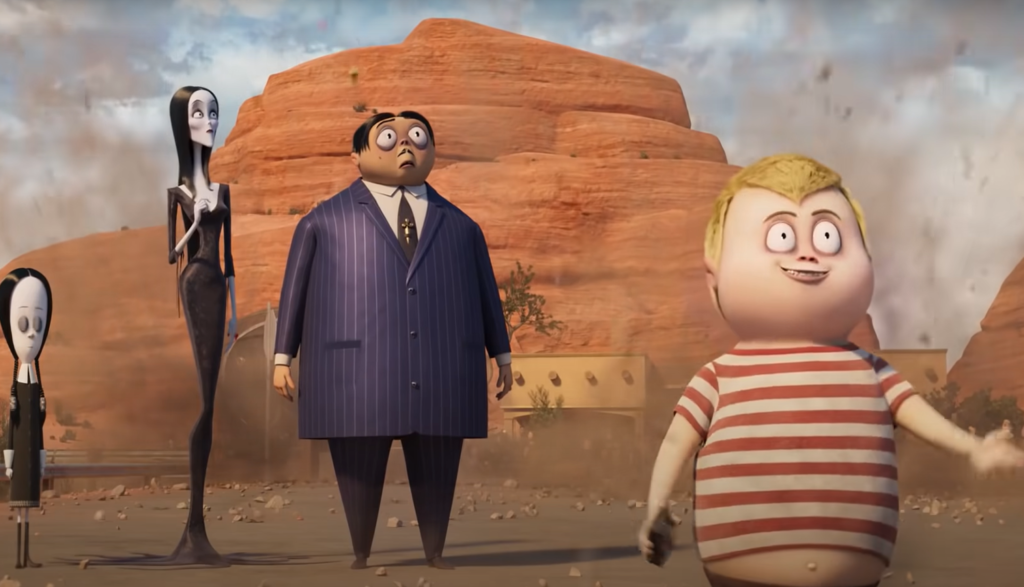 Granted, the entire Addams family is, shall we say, unconventional. Their butler is a hulking Walking Dead extra. Their chauffer is a disembodied hand. Their household pet is a lion, their houseplant is a monstrous Venus Flytrap named Chuckles. When they serve finger food at parties, it’s likely actual fingers.

Wednesday appreciates all that, of course. Nothing says home like eyeball stew, a family game of Death and some quiet time with a good book—perhaps Poisoning for Fun and Profit. But even at home, Wednesday sometimes doesn’t feel at home. Her father, Gomez, is entirely too loving. Her brother, Pugsley, is entirely too gullible. And could someone as bright as Wednesday be truly related to Uncle Fester? Someone whose idea of self-improvement is changing the sheets a month early?

But The Addamses will have company on the road. A scientist named Rupert Strange has sent a couple of his lackeys to fetch Wednesday to him. He says that there was a mixup at the hospital, and the little girl is actually his little girl—not an Addams at all. And, Strange says, it’s high time that Wednesday come home.

The Addams clan won’t give up Wednesday willingly. But if the headstrong daughter decides to leave on her own, can they stop her? After all, little girls who build guillotines in their spare time are not to be trifled with.

We all know that members of the Addams family are creepy and kooky, mysterious and spooky. But they are also, in their own way, quite loving. Gomez showers affection on Wednesday (much to the girl’s annoyance). Uncle Fester tries to tutor Pugsley on the art of dating (much to the boy’s sorrow). The butler, Lurch (who’s almost like family), is as loyal as they come. Addams family members risk a lot for each other, including their very lives.

That off-kilter love combines with the movie’s plot to offer a surprisingly nice message about adoption. While the real identity of Wednesday’s birth parents may be a bit up in the air for much of The Addams Family 2, the film makes no secret about who her real family is. “You’re an Addams, just as Wednesday is,” Morticia tells a family member. “Whether it’s in her blood or not.”

The fact that that family is so unusual offers fruitful soil for another good message: It’s OK to be different.

Cousin It—an Addams covered in hair—tells Wednesday that he used to be ashamed of how he looked, to the point that he shaved off all his hair as a teenager. But eventually, Cousin It decided to embrace who he was, hair and all. And now, he’s unquestionably the hippest character in the movie. (Voiced by Snoop Dogg, he even spits out a rap.)

We hear plenty of references to ghosts and ghouls, naturally. A quartet of singing heads livens up a party back at the Addams family mansion.

Wednesday owns and uses a voodoo doll of Pugsley. (The result is a lengthy slapstick scene.) Gomez owns and uses a sword he calls Deuteronomy. There’s a passing reference to the “witching hour.”

Gomez and Morticia are as in love with each other as ever. We see them embrace often and mutter sweet (and ever-so-vaguely suggestive) nothings to each other.

After a small explosion, Gomez shouts, “You inflame me! I feel liquid magma lapping at my body!”

Pugsley is beginning to feel an attraction to girls, and he makes some ill-advised advances. Uncle Fester (whom we sometimes see in nothing but a pair of boxers) does his best to tutor Pugsley in the ways of love. “I’ve been on three first dates!” he says. “I mean, who else has that kind of experience?!” He also offers Pugsley his self-published book, The Fester Method: How to Woo and Other Tips on Love. Pugsley tries to use one of Fester’s favorite wooing lines, which does not go well: “I’ve skinned my knee … falling for you!”

We see some animated people walk around on a beach in swimsuits, including a few bikini-clad women.

For an instant on screen, we see two women dancing with each other in a biker bar.

The Addamses and violence go together like two halves of a pair of scissors. But most of it, naturally, is played for laughs.

Wednesday manipulates Pugsley via a voodoo doll, leading to a great deal of slapstick humor (and quite a bit of pain on Pugsley’s part). People plunge over Niagara Falls (an attraction Gomez gleefully notes has been the doom of many), though it seems everyone survives. Two monsters battle each other, with one apparently dying and the other nearly doing so.

Wednesday habitually tries to kill Pugsley, her brother. Uncle Fester hurls knives at Gomez as he rotates on a wheel. People on a beach are electrically shocked (revealing the skeletons underneath the skin). Child beauty contestants have red paint dumped on them—a nod to the R-rated horror movie Carrie. (We see plenty of other references to violent horror and slasher movies, too.) Uncle Fester is beaten up by his own tentacles. (In the context of the movie, that makes sense.) A science-fair becomes a scene of chaos when Pugsley messes with someone’s volcano exhibit. He also blows up much of the Grand Canyon and tries, unsuccessfully, to blow up a glass cylinder.

Wednesday pulls lots of Gomez’s hair (including nose hair) to test his DNA. She makes a reference to the cannibalistic Donner Party. Someone loses what looks to be a set of false teeth during a game of billiards. Wednesday announces she feels something akin to butterflies in her stomach. “Perhaps my digestive acids will kill them,” she adds. Someone makes a guillotine out of sand. While the rest of her family is away, Grandmama Addams throws a massive party. “There were a few injuries,” she admits. “But the EMT is here, and they’re having a wonderful time.”

Someone falls down a staircase. Another character is trapped beneath a giant rock (but apparently otherwise unharmed).

We hear one use of the letters OMG. When Uncle Fester hands someone a finger, the recipient alludes to an obscene gesture that uses the same sort of digit.

Uncle Fester is holding what seem to be juggling balls when he starts to fall down some stairs. He exclaims, “My balls! My head” as he tumbles.

Gomez drinks oddly colored cocktails from martini glasses. Wednesday mixes chemicals as part of a science experiment, which takes on the tang of a bartender mixing a drink. Gomez and Morticia are served beverages in coconut shells. Beer is poured and served in a biker bar.

The Addams Family 2’s biggest content concern probably is its reliance on bathroom humor. We see and hear lots of it here, from people being flung into huge piles of poop to big piles of poop (in bags) being flung and hitting people. After a bevy of explosions, a man comes to rest, still sitting on a toilet. (Nothing critical is seen, but it’s still mildly suggestive.) A lion digs a hole in a public beach and does his business there. And so on.

When the Addames disguise themselves as cowboys, Pugsley gripes that he feels like “Uncle Sam threw up all over me.” As Uncle Fester slowly turns into an octopus, he has an inking episode or two that the movie suggests is similar to urinating (or worse) in one’s pants. There’s a joke about someone’s bad breath. When Wednesday squeezes a voodoo doll, Pugsley releases gas.

In an era where animated movies have become richer and deeper, The Addams Family animated films stand out by virtue of their ordinariness.

That’s pretty ironic, considering the wildly colorful habits of the Addamses themselves. But while Disney and Pixar and Sony and DreamWorks often push multilayered stories into their animated fare and can sometimes tease a few tears out of adult viewers, MGM’s franchise is still very much a cartoon. The makers aren’t trying to raise the animated bar. Indeed, some of the humor aims quite a bit lower.

Bathroom jokes in The Addams Family 2 are so numerous you’d think the whole movie was teepeed. Slapstick gags and wordplay are intrinsically part of the Addams schtick, but that keeps the film trapped in its own conceit. In a year that’s already seen films like Raya and the Last Dragon, Vivo, Luca and The Mitchells vs. The Machines, The Addams Family 2 feels expendable.

But while The Addams Family 2 might not be a great movie, it does offer us a couple of great messages: Families, for all their frustrations, are pretty great. And you don’t need to be born into a great family to be in a great family.

Nothing creepy or kooky about that.