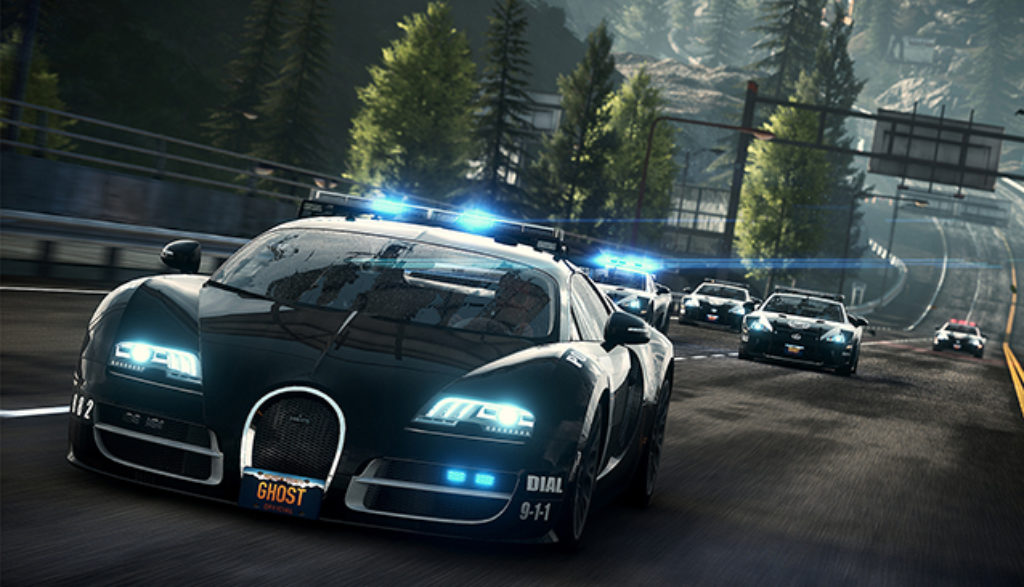 It’s safe to say that the police officers of Redview County have quite a large departmental budget at their disposal. After all, these hot-footed flatfoots drive the likes of Aston Martins, Bentleys and Lamborghinis! And they’re not afraid to use them … and abuse them. They have a high-octane passion to apprehend speeding ne’er-do-wells, and if that means slamming those lightning-speed lawbreakers off the road in a tumbling ball of smoking, twisted metal, well, so be it.

This is the world of Rivals, the latest in the über-popular Need for Speed racing series. Illegal street racing is a bad, bad deal, this game says … and then lets you take the wheel and do your illicit best. Of course that doesn’t sound very much different from 2010s Hot Pursuit. No real story to speak of, just a wide-open roadway scattered with time trials, white-knuckle slam-bam racing challenges, and pursuit missions involving those fleet-of-tire cops and criminals. Oh, and a whole bunch of incredible cars (that include the exotics I’ve already mentioned along with Porsches, Bugattis, McLarens and Maseratis), each with its own unique acceleration, handling and defense capabilities.

The controls are precise and sensitive. So for the first hour or so most gamers will likely be slamming into guardrails and running off the road even without someone hot on their heels. But after a while the maneuvering starts to feel more instinctual, and the speed becomes a visceral thrill.

In fact, through the high-def eyes of, say, the new PlayStation 4 or Xbox One, the cars and their blur-by surroundings become beautiful things to behold. And in some ways, that’s even more true if you’re “just” cruising down the coastline for a wave-crashing ocean view or taking a leisurely drive down twisting mountain roads to catch an impressively fiery sunset.

You’ll notice, though, that the game isn’t called Need for Leisurely Drives. This is game that’s all about the “rivalry” between the police and their quarry. And parents should note once again that it offers players the choice between becoming one of the good-guy radar gunners who long to shut the citizen-endangering hot rodders down or a reckless illegal speedster always on the lookout for a grip-the-wheel-mash-the-accelerator-and-smash-through-any-roadblock race.

On both sides of that line, you spend your time learning the county’s roadways and fine-tuning your ability to weave through traffic, drift around turns and make smart use of short bursts of nitrous oxide. The law guys rely on a number of techy devices to get the blazing-fast job at hand done. Spike strips, overhead air support and electromagnetic pulse generators help slow their foes. But the raucous racers have purchasable tech as well, in the form of electronic jammers and a shock wave mech that lets them blast and repel pursuers with a lightning-like charge.

Does that all sound a bit more like a combat game than an old-school race ’round the track? Well, that’s because high-speed smash-’em-up is a big part of the Rivals revelry. There aren’t deaths or crude language to contend with though. Indeed, you never even see the person behind the wheel of the vehicle you just slammed into a tree. But you get points for causing the crashes. And special “bounty” bonuses can be earned for incapacitating an opponent or sending him hurtling off a cliff.

So let’s just say it’s not the kind of game you want your teenager playing all night before his driver’s test the next afternoon. But neither is it an M-rated (or even T) kill-fest designed to paint the landscape with shades of red. These roads stay black and the lines are bright white … except when you skid across them on a tight turn.