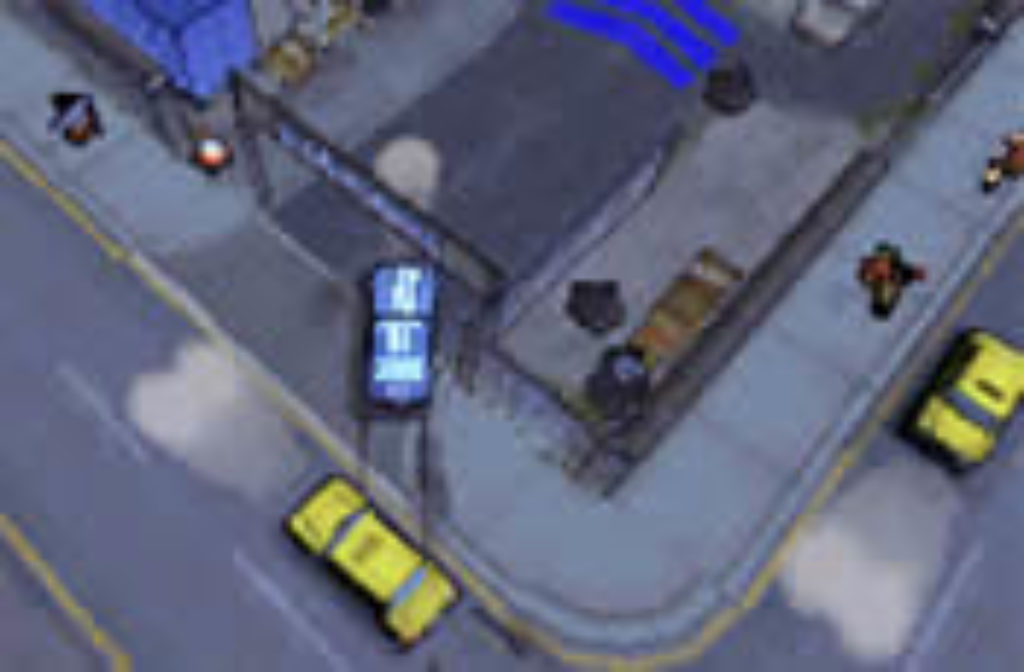 When I think of Nintendo’s DS, I rarely think M-rated games. It’s a platform for the younger set, right? Nope, not any more. Grand Theft Auto: Chinatown Wars has just driven into town, kids.

Sure, this isn’t the first “adult” game ever made for this handheld platform (there are six other M-raters to date), but it certainly is the most high-profile title designed specifically for the DS. And I do mean specifically. Parent company Take-Two Interactive is using this RockStar release to test the handheld waters. “We’re going to do a lot of learning with GTA: Chinatown Wars on the DS in terms of bringing that kind of content to a Nintendo platform,” said company CEO Ben Feder.

So, let’s take a brief tour of Liberty City and see what kind of “content” Mr. Feder wants to bring to your DS.

Bloody Bird’s-Eye View
First of all, Chinatown Wars displays most of its action from a top-down perspective that’s reminiscent of the original 2-D game. Other than some stylistically illustrated cutscenes, we watch small characters walk and drive around on miniature city streets from a bird’s-eye point of view. So the typical blood ‘n’ guts visuals of other games in this franchise aren’t quite as in-your-face. But, believe me, this is no old-school throwback. It’s a modern GTA through and through.

Gamers play as Huang Lee, a Chinese national who flies into Liberty City to follow up on his crime-boss father’s recent death—a man he calls, “a good guy, for a philandering, drug-addled murderer.” So the young Mr. Lee drops into the midst of a power struggle in the local Triad crime syndicates and must not only find and dispatch his father’s killers, but also establish his place of power along the way. Achieving those goals means doing the same death dealing, car stealing, drug selling and high-speed racing that has been the modus operandi of all the latest GTA titles.

For example, as Huang you get a foothold in the gangs by fulfilling dozens of different errands and missions for the Triad bigwigs. In one such mission you’re asked to steal an ambulance to retrieve and transport someone from the hospital. While racing recklessly through the city—trying to lose or wreck pursuing police vehicles—you have to continually shock your passenger with a defibrillator to keep him alive. Upon arriving at the crime base, you find out that the suffering patient owes the big man in charge a “pound of flesh,” which the boss promptly retrieves by cutting his heart out. Gory sounds and spattered blood then fill the, um, cutscene.

That’s only one of the many, many unsavory quests, activities and minigames that are offered here. Transporting a male porn star and his entourage of female “fluffers” is another. (There aren’t any sexual sights, but lustful moaning and limo shaking readily convey what’s going on in the back seat.) Ripping off cars via a hot-wiring or ignition switch-cranking minigame is a common occurrence. And a “Rampage” game also pops up from time to time, challenging gamers to gain points by mass-slaughtering as many random people as possible within a given period. (The dead fall as blood pools in the streets.)

Guns and Drugs Made Fun
To carry out these massacres and other required violence, the game stocks a hefty arsenal that ranges from explosive grenades and Molotovs to digital flesh-rending swords, shotguns and sniper rifles. Chinatown Wars is also quite explicit about its drug content—clearly illustrating the heroin, coke, Ecstasy, acid and weed it asks you to sell or steal. And as your guns blaze and drug loot fills your pockets, the crime-ridden gangland is also littered with another gritty texture: f- and s-words, spit out or written.

That’s not to say the Chinatown Wars gameplay and storyline aren’t involving. GTA gamemakers have learned the ropes in the course of designing so many titles and expansion packs over the past few years. Through humorous dialogue and well-paced action, gamers are sucked into a world that quickly becomes addictive.

And that makes the game’s repeated profanities, ugly violence and undergirding lessons all the more problematic. What lessons, you ask? Crime pays. Revenge is worth it. And all that illicit sex, drug use and violence that looks so glamorous from the outside … really is.

Now, the industry mantra, of course, is that we really shouldn’t worry about any of that. I mean, come on, it’s only a game! How can it possibly hurt anybody? Well, I won’t name names, but I know people personally who’ve been hurt. Major scientific studies show significant side effects, too, but for me it’s the up-close-and-personal stories that make me understand. And I’ll say this, too: I play these things for a living and consider myself to have a pretty hard shell, but enough hours with a GTA title still leaves me worse for the wear.

So I simply hate the fact that there’s now a better chance DS-playing kids will be able to get their hands on this stuff. So, Mr. Feder, here’s one gamer who’s hoping Grand Theft Auto: Chinatown Wars fails your market test. Fails it miserably. Maybe then you’ll decide to leave handhelds to the E-raters.

More by Dave Dillard
Back to Top