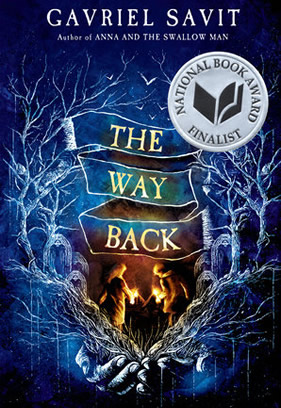 Inspired by Jewish folklore, The Way Back is a story of two grieving teens who travel through the land of the dead to challenge the Angel of Death himself. But how does one beat death? It will take creative thinking and maturity to find the truth about the departure of their loved ones and hopefully the way back home to the living.

A stranger is coming to town, and Yehuda Leib is told by his frightened mother he must flee. Not really knowing why, Yehuda Leib leaves Tubisk that very night. However, as circumstances would have it, Yehuda Leib runs into the stranger who tries to capture him. With the help of a friend, Yehuda Leib escapes. But a stranger is accidentally killed in the escape, a man who turns out to be his long-lost father.

When Death comes to take his father’s soul, Yehuda Leib decides he will take it back. It is not fair that at the very moment he met his father; he lost his father. So, he follows the crow that carries the spark of his father to a Far Country, the home of the dead and demons.

Meanwhile, Bluma knows everything about her Bubbe, who lives in the attic above Bluma’s bedroom. The girl is familiar with every step, shuffle or creak that the old woman makes. So, when the Angel of Death enters the room, Bluma knows. And when Death accidentally drops its soul scooping instrument, Bluma finds it—a spoon. Not an ordinary spoon, like one you eat with. But a spoon that eats.

Bluma is both intrigued by the spoon and afraid of it. When she tries to get rid of the spoon by throwing it away and even burying it, it returns to her pocket. It will not leave her even as she runs into a cemetery and passes from the land of the living into the land of the dead. Here, in the Far Country, Bluma meets Lilith, who teaches Bluma how to use the spoon. Bluma hides from the demons by letting the spoon swallow her face and then her name.

Speaking of demons, they’re all trying to get to Zubinsk for the wedding of the holy Rebbe’s granddaughter. An open invitation to anyone and everyone allows demons to enter the human world. Even the Angel of Death is there, looking for a reprieve from the toil and ungrateful attitudes of those who have passed.

Eventually, everyone finds their way to Zubinsk. When the Angel of Death and Yehuda Leib go to the holy Rebbe for help, their interaction accidentally kills the holy Rebbe. Angry over his lost opportunities, Yehuda Leib decides he will kill Death. Bluma joins Yehuda Leib to either to get her name and face back from the spoon (and Death), or to give the rest of her soul away.

A fight with the powerful Angel of Death requires gathering of demonic armies. Yehuda Leib and Bluma travel through grim parts of the Far Country, making deals with several powerful demons so that they can attack Death together.

When they finally face Death, the being explains how it (the angel’s gender appearance shifts depending on who it’s interacting with; the angel is an old man with Yehuda Leib and an old woman with Bluma) is there to usher souls to the eternal light. The Angel od Death is always “sent” when the time is right for the soul to come home.

Yehuda Leib and Bluma realize that they want their loved ones to go into that eternal realm after all. While they will miss their family members, death does come to everyone and is part of life. In fact, it is essential to appreciate life. So they relent and decide to not kill the Angel of Death. However, they are still in the land of the dead and must figure a way out. Together, they carefully walk backwards, leaving the Far Country. And in the end, they find they will continue to travel together until it is their time to meet Death again, but this time as a friend.bbbb

Biblical themes, references and allusions include the subject of prayer, reading Scripture and the snake in the Garden of Eden. Also, the concepts souls, demons and angels are discussed. At one point, a demon flinches when the phrase “God forbid” is used. Also, the Angel of Death hints he is upholding an eternal order and there is someone greater than himself. He calls this power, “the Infinite Names of the One.”

The Way Back is based on Jewish folklore and Judaism. There are references to synagogues, prayers, a ram’s horn, the Talmud, toasts of l’chaim and a Chanukah menorah. One of the chief heroes in the book is the Rebbe of Zubinsk, who can perform miracles and is a powerful force against the demons. There is a strong metaphysical sense to him too. He is said to contain a part of the soul of each of the Hasidim that follow him. During meditation, he can leave his body and hover as a spirit.

In the Far Country, there is an order to the demons and transient dead. There are demonic dukes, barons and earls who are fighting against each other to oversee their world. Mamon, Lilith, Dantalion and Dumah are the main demonic leaders. Each have their vices. Mamon is about greed and possessions, Lilith is about women’s rights, avoiding marriage and submission, Dantalion is said to have been the snake in the garden of Eden and is about secrets, rumor, and misunderstanding. And Dumah is the silence that consumes. At one point, the phrase, “Nothing ventured, nothing gained” is referenced, and Mamon says not to quote his own scripture to him.

The demons have limits. They need an invitation by a human to get into the living world or to possess a human being. Next to their internal power struggles, they are desirous of anything human. “A living mortal was a precious thing—perhaps the most precious thing a demon could ever acquire.”

There are also several superstitions at play here. Talismans such as red thread, cold metal and salt can bar demons from entry or even kill them. One man even carries an old slice of bread with a bite taken out of it because the holy Rebbe of Zubinsk had eaten from it, and he believes it has special power.

Yehuda Leib is being raised by a single mom. While she cares about her son, she is exhausted and not able to reign in his troublemaking ways. Bluma’s parents are kind, but also are preoccupied, especially with mourning her grandmother’s death.

The lead demons are, at times, presented with noble characteristics. Dumah keeps his word to Yehuda Leib and goes into an unwinnable war. Lilith helps Bluma hide from the demons.

The Angel of Death is an interesting figure who has strong powers but who also seems to have lost its way. It is looking for answers and is incredibly lonely. However, after talking with the Rebbe, it realizes it has a job to do. And through its interactions with Yehuda Leib and Bluma, it comes to a better understanding of the fear of death that many people express.

The Rebbe of Zubinsk visits a young man in his dream. He instructs him to pledge his loyalty to his granddaughter as his Rebbe. There have never been female Rebbes, so this is an interesting twist that the book does not delve into more deeply.

There are a couple references to men smoking pipes and the Hasidim (devotees to the Rebbe) drink vodka late into the night as they make l’chaim toasts. Mistaking the Angel of Death as part of the Hasidim, they all get drunk together. The Angel of Death has a terrible hangover the next morning.

The story’s conflicts and the land of the demons both have a Grimm’s fairytale feel, slightly scary, slightly disturbing, but not gory or gruesome. Bluma is traumatized as she escapes demons that grasp at her with claws and teeth. Yehuda Leib escapes a demon by throwing salt on it, which burns its skin like acid.

The demons have claws, sharp teeth, unusual coloring, and rotting skin. And there are references to bones, human teeth and hanging men. Dumah, a general who commands an army of the dead, has medals and ribbons pinned to his shirt made from an eye, a tooth, a toe, a tongue, etc.

Lilith talks about a graveyard that is unmarked. “There are deaths that occur in secret … burials attended by one alone.” Men forget about these deaths, a detail that perhaps hints at abortion.

The Angel of Death is labeled as “it” but when people look under the hat of Death, they see themselves and then death is a man, woman, boy or girl.

Lilith, a demon, tries to convince the Rebbe’s granddaughter not to get married and “waste her life.” Marriage, in Lilith’s mind, means being “subservient and second class” to men.

Knowing that our souls are eternal, what might be the reason God has us on earth? Why are we living? And what makes for a good life?

In the book, The Screwtape Letters C.S. Lewis says there are two errors Christians make regarding the devil. One is believing the Devil does not exist or is a harmless, red minion in with a pitchfork that we shoo away like a fly. The second error is to think about him excessively and either live in crippling fear or have an unhealthy interest.

In that light, what does the Bible say about demons (fallen angels) and what is a healthy perspective? How does Lewis’ concept contrast with this story? Can you find examples in Scripture of how people interacted with angels (good and bad)? What can those interactions teach us?

The idea of a life eternal comes up in this story. What does Scripture have to say about where we find eternal life? How does what we read in the Bible contrast with the perspective of eternal life you read about in this book?

Get free discussion questions for this book and others at: FocusOnTheFamily.com/discuss-books.

As Focus on the Family author Jim Ware explains in his book, God of the Fairy Tale, fairy tales can be stories that help us examine deeper truths. In The Way Back, the concepts of living, grief and choices are explored through story. Stories like this one can likewise be a potential vehicle for families to explore these complex ideas: encouraging thoughts on the meaning of life and what is after death. Parents should note that that thoughtful journey can be worth it here, but only after articulating what the Bible has to say about angels, demons and eternity. That can help young readers avoid being derailed by confusing concepts.

Book reviews cover the content, themes, and worldviews of fiction books, and equip parents to decide whether a book is appropriate for their children. Including a book’s review does not constitute an endorsement by Focus on the Family.