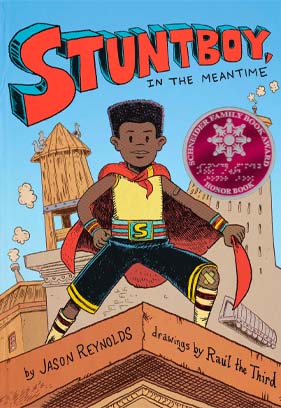 Portico “Stuntboy” Reeves hopes to be the greatest superhero you’ve never heard of. But when his parents argue and look at each other with angry eyes, he’ll need all his tricks to withstand the great threat facing his family, not to mention those strange stressful things he’s feeling inside.

It’s pretty cool being a superhero who lives in a castle.

Now, you can be nit-picky and say Portico Reeves isn’t really a superhero, and he doesn’t live in a castle. You can smirk and say he’s just an average kid who lives in a regular old apartment building and has a hard time standing still.

But that would make you short-sighted.

Sure, Skylight Gardens is technically an apartment complex, but think about it: It’s a huge building with, like, fifty-plus doors, fifty toilets and bathtubs, more than a hundred windows and maybe a million stair steps. And it’s made of the glassiest glass and the brickiest bricks on Earth. That’s pretty castle-worthy, if you ask me.

This castle-like structure is also just a little magical. I mean, it’s like living right inside a TV, where behind every door is a new show with a new cast of characters. OK, the bullying kid down the hall from Portico, named Herbert Singletary (the Worst), isn’t so fun to be around. He’s one of the things that causes Portico’s anxious “Frets” (debilitating anxious feelings) to pop up. But, by and large, everybody else is pretty amazing.

Zola, Portico’s bestest besty, sure is. She’s amazing times special, if you ask him. In fact, she’s the person who helped Portico create his secret identity called Stuntboy! (See, I told you he was a superhero. Just don’t spread it around.) When he gets particularly Frets-filled, he simply transforms that debilitating anxiety into action that he can use to save the day.

No, Portico can’t fly or drop-kick baddies with an iron boot. (Besides his mom would never let him stomp around with iron shoes.) But he does distract bullies with his famous Zamarama Zig Zag! And he can leap over obstacles with his incredible Plaster Blaster! move. Once, he even used his super inhaling powers to breathe in the foul air when somebody broke wind on the school bus. It was all in an effort to keep the smells from hurting others. Portico called that super move the Never Again, uh, for obvious reasons.

Lately though, there’s been something nefarious afoot. His parents have been arguing. They get this fiery look in their eyes and fight over things in their apartment and what belongs to whom. And they’ve started stacking those argued-over things in separate piles.

When Portico walks in on one of those fights, his mom and dad pause. He asks what’s going on and they tell him, “Nothing.” But then they add, “In the meantime, why don’t you go play with Zola,” or “In the meantime, you could run to the corner store for milk.”

Portico is pretty sure those Mean Time arguments aren’t going to go away. So, even though he keeps his Stuntboy identity secret, he’s gotta feeling that he’ll need to start being the hero. He’ll need to pull out his best stunts and tricks if he wants to save his parents from the mean times.

It won’t be easy. But it’s what a hero does. And even when his heart drops to where his stomach was and stomach jumps up to his heart space and the Frets come on in a rush, Portico will always do his best to be a hero.

When Portico is in one of his Frets modes, Zola talks to him about how to meditate (and later, how to do yoga exercises) something her aunt taught her. They take the time to breathe deeply and focus on thoughts that aren’t so stress-filled.

Portico defines his Stuntboy superpowers as the ability to help make “sure all the other heroes stay super. And safe. Supersafe.” And each time he pulls a stunt, it’s in an attempt to help others steady themselves or avoid trouble. (He tumbles on a staircase, for instance, to help steady a wobbling apartment resident. And he leaps in front of Zola in a crazy way to attract someone’s negative comments away from her. Etc.)

Portico’s mom and dad are both good people. And they both love their son dearly. But they are obviously arguing their way to separation and a potential divorce. Even though we see the evidence plainly, it’s a pretty big shock when Portico realizes the truth. Neither parent wants to leave Portico behind (like Herbert Singletary’s dad did when he left), but Portico still wrestles with all the unsettling emotions of the coming split—even starting to see himself as split, too. (The issue isn’t fully resolved by the end of the book.)

Other adults in the apartment building all seem kind and caring. There is one tenant who is pretty wobbly when he maneuvers around, and the possibility that there may be some substance issue in his life is winked at, but nothing is clearly defined.

There’s no profanity in the story. But Herbert Singletary the Worst is a kid who like to tease others in an effort to ease his own angry feelings. He says mean things such as: “Your dad smells like ham and poop sandwich.” And that causes Portico to think that Herbert is “the stinkiest, weenaged snot-bot ever.” “Poop” shows up in other conversations, too, such as when a young boy poops his pants while getting his hair cut.

Herbert Singletary can also cause some slam-bam problems, too. He trips Portico into a table, causing him and the table to crash to the ground. And he chucks a water balloon into Zola’s face, hitting her so hard that it breaks her glasses.

Zola is a huge fan of a pair of sibling superheroes on TV. And when Portico tells her about some of his parent’s squabbles, she relates them to an episode of that hero show, that usually ends in “an explosion of Great Magnitude.” We see some of those explosions drawn out with the heroes flying from the concussion.

Some of Stuntboy’s stunts don’t go exactly as planned and they cause some thumps and bumps for Portico and others. He tumbles over at a birthday party, for instance, splashing guests with punch and cake. He breaks a precious school art project with a misplaced tumble. And he ends up scuffing his knees and hitting the ground hard enough to lose his breathe sometimes.

In one case, Portico’s anxiety transforms into righteous anger when someone purposely hurts Zola. Portico tackles the villain before someone pulls him away. Portico’s parents argue over whether his angered actions were right or wrong.

The book also takes what it labels as “commercial breaks” to fill readers in on some important information from time to time. And those can be focused on some of Portico’s stunts. For instance, one commercial is about how to roll down steps safely. And it concludes with: “DON’T ROLL DOWN STEPS! Just … pretend to.”

A man named Soup—who’s the superintendent of the apartment complex—answers Zola when she asks him what it means to be a “Super,” while thinking he’s a real superhero. “Being a super is just about taking care of things,” he tells her. “Looking out for people. That’s all.”

The residents of the apartment complex all throw a community block party. And the drawing of the event features a barrel filled with bottles and cans labeled: “Cold Ones.”

Portico and Zola both have to deal with Herbert Singletary’s teasing and bullying. Have you ever been approached by people like him? How did you deal with it? How does the Stuntboy story suggest you deal with someone like that? Take a look at Psalms 138:7. What do you think that verse is suggesting you do in the face of adversity?

What else did this story tell us about Herbert Singletary? Did that impact what you think about bullies?

Portico’s parents are also arguing frequently over little things. How did that impact him? Do you think kids have any real control over the way their parents argue or interact? So, should Portico blame himself in any way for their arguments?

What do you think this book is saying to kids who have difficulties in their family lives? What is it saying about the support of friends? How can other adults help when things at home are tough? Should other adults be involved? What does God say we should do when our family life is feeling strains and difficult times?

Author Jason Reynolds has created an interesting story designed with the dialogue cadence of Black community culture. It tells the important story of a young boy navigating his own anxiety issues as well as parental divorce. In that setting, Stuntboy, In The Meantime also deals with the benefits of having a good friend and how to work through conflicts with a bully.

The fully illustrated book includes comic book-style panels, humorous commercial breaks and story-within-a-story asides. And it ends, cliffhanger-style, without a full resolution of the divorce issue.