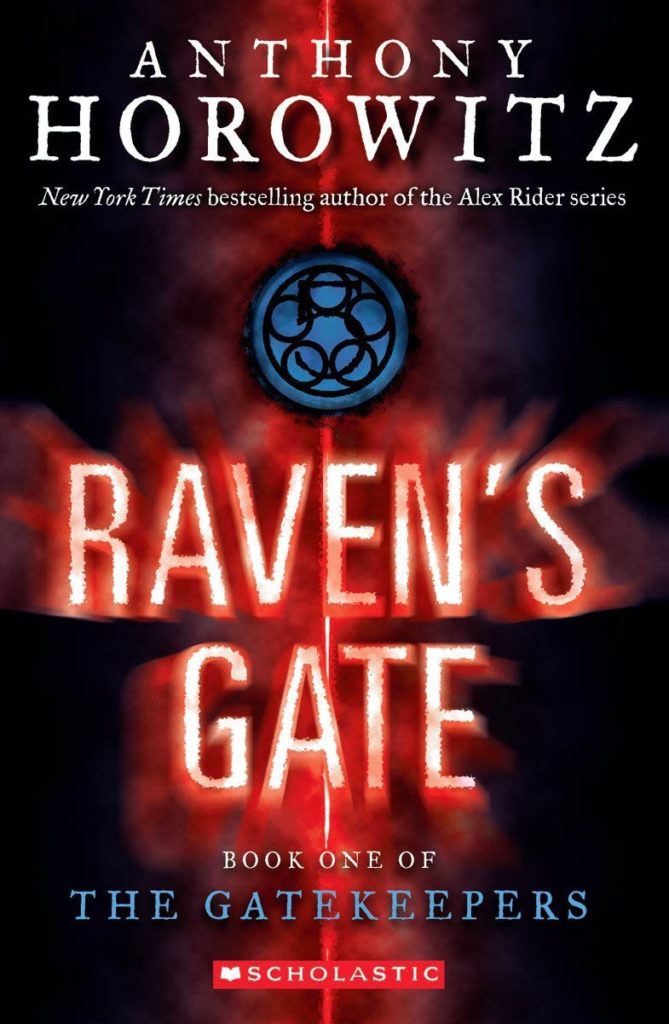 Raven’s Gate by Anthony Horowitz has been reviewed by Focus on the Family’s marriage and parenting magazine. It is the first book in “The Gatekeepers” series.

After 14-year-old Matthew Freeman helps an older boy rob an electronics warehouse and is caught, he is sent to a remote English town called Lesser Malling for foster care and rehabilitation. A strange, cold woman named Mrs. Deverill is Matt’s new guardian, and the townspeople are odd. When Matt begins seeing lights and hearing chanting at night, he tries to escape the town, but every path he takes leads him in a circle, right back to Lesser Malling.

Matt discovers an abandoned power station called Omega One and realizes it is the source of the strange lights he’s seen. The man guarding it (Burgess) warns him to leave town right away. Burgess gives Matt a necklace—a talisman—that will allow him to escape the confines of Lesser Malling, and he promises to explain the mysteries of the town to Matt the next day. But when Matt goes to Burgess’s home, where they had agreed to meet, Matt finds Burgess’s mutilated body. Burgess has left one clue scrawled in paint on the wall: Raven’s Gate.

Matt seeks the help of a bored, skeptical newspaper reporter named Richard Cole in a nearby town. The reporter initially rejects Matt’s story but later saves Matt from a nightmarish creatures conjured up by Mrs. Deverill and the villagers, who are modern-day witches. In their efforts to learn about Raven’s Gate, Matt and Richard consult a scientist name Marsh who helped build the Omega One. He dismisses their concerns, saying that anyone could be using the old power plant now. They also visit a psychic named Miss Ashwood, who directs them to Professor Dravid, a renowned anthropologist.

Dravid meets Matt and Richard after hours at the London Natural History Museum and explains he is part of a covert group called the Nexus, which keeps the story of Raven’s Gate alive. Raven’s Gate, he tells them, was an ancient circle of stones pre-dating Stonehenge. Powerful, evil creatures called the Old Ones created chaos on earth until a group of five special children overthrew them, sending them into another dimension and sealing off their re-entry point with the stone circle. Somehow, Matt is one of these five children. Though the stones were destroyed, the gate still exists. As Dravid, Richard and Matt try to exit the museum, dinosaur bones come to life and battle them. Dravid dies, and Richard is nearly killed.

Mrs. Deverill captures Matt and Richard and returns them to Lesser Malling, where they are held until the witches’ Black Mass celebration. The villagers place Matt in the Omega One chamber, which, with the help of Marsh, is back in working order and powered with uranium. Marsh and the witches believe that, by using a combination of witchcraft, technology and Matt’s blood, they can reopen Raven’s Gate and free the Old Ones, whom they worship.

Matt and Richard escape, foiling the experiment. Most of the witches die, Mrs. Deverill falls into a vat of acid and an Old One gets through Raven’s Gate just long enough to kill Marsh before being returned to its prison.

The Nexus arranges for Matt to stay with Richard and provides money for all of their needs until the group is ready for additional help from Matt.

The ancient writings of a Spanish clergyman led to the discovery of Raven’s Gate. The Nexus has connections within all-important corridors of power, including the Christian church. A bishop who is a Nexus member tells the group that, officially, the church doesn’t believe in the Old Ones anymore than it believes in demons or devils. Miss Ashwood says they should pray Matt finds the Nexus before the Old Ones are set free.

Mrs. Deverill and the residents of Lesser Malling are all witches and warlocks. During what Matt thinks is a dream, Mrs. Deverill and other townspeople perform a ritual and give him snake’s blood to drink. They frequently chant the Lord’s Prayer backward and conjure up ghastly, deformed dog-like creatures from fire. While trying to rescue the Old Ones, they hang a cross upside down with a goat-horn knife underneath it. Because she has been tracking Matt, Mrs. Deverill believes that he has precognitive abilities, and Matt later admits to Richard that he had foreseen in detail the accident that killed his parents.

Matt’s powers once allowed him to break a glass with his mind. He harnesses them again and keeps Marsh’s knife from killing him inside Omega One. Matt and Richard consult with Miss Ashwood, a psychic and spiritualist who speaks with people on the other side just like she speaks with living humans. Miss Ashwood is a Nexus member who expresses her deep sense of foreboding about the future. She says all history has been preparing itself for the return of the five special children and the battle ahead. Miss Ashwood also tells Matt she feels the power in him and has never felt such strength before.

Dravid tells Matt and Richard that the witches will try to release the Old Ones on Roodmas, which begins at sundown on April 13; it is the day of Black Sabbath when dark powers are their strongest. Dravid tells them the Old Ones were the original evil, and that the Christian church’s talk of Satan, Lucifer and other devils is just memories harkening back to the greatest evil. Another Nexus member, Fabian, tells Matt about a prophesy that says five children saved the world and they will do it again. As Marsh prepares to sacrifice Matt, Marsh says that blood is the most powerful form of energy on the planet, which is why it has always been used in magical rituals.

Matt’s parents were killed in a car crash when he was 8. Aunt Gwenda, a half-sister of Matt’s mom, only agreed to serve as Matt’s guardian because of Matt’s inheritance money. She whines and complains about what a burden he’s been. Her live-in boyfriend, Brian, sometimes beats Matt but was careful not to leave visible bruises. Mrs. Deverill has stalked Matt for years. She doesn’t allow him to leave Lesser Malling because she and her fellow witches plan to use his blood for their ceremony. Richard helps Matt and takes him into his home, primarily to get a good story he can sell to the papers.

The words crap, sucks and d–n each appear once. Kelvin knifes a security guard to death in the warehouse he and Matt are robbing. Mrs. Deverill uses her powers to make a street criminal stab himself in the heart with a kitchen knife. She says she wants to be the one to slit Matt’s throat. Some Lesser Malling children play a game where they lure ducks with food then kill them with BB guns.

Matt visits Burgess, only to find the man has been killed in a gruesome manner as if by an animal. Richard destroys the witches’ dog-like creatures by setting them on fire with gasoline. The scene where dinosaurs come to life is dark. Other gruesome, descriptive death scenes include Mrs. Deverill’s farmhand falling on his sickle, Marsh being crushed by an Old One and Mrs. Deverill falling into a vat of acid.

Matt initially lives with his Aunt Gwenda and her boyfriend. Richard lived with a girlfriend until she left him for another man.

Evil: Marsh explains how he came up with his theory for rescuing the Old Ones this way: “Do you really think it’s so crazy to draw parallels between the power of the nuclear bomb and the power of black magic? Do you really believe that a weapon capable of destroying cities and killing millions of people in a few seconds is so far removed from the devil’s work?”

Stealing: Matt has shoplifted a number of times, under Kelvin’s direction. Matt searches Mrs. Deverill’s room for money to steal when he’s preparing to escape from her custody.

Alcohol: Steven, a juvenile crime specialist looking after Matt’s welfare, drinks two miniature whiskeys on the train. Richard has a beer at his home.