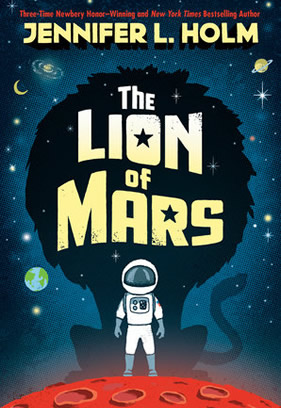 Eleven-year-old Bell is a regular, cat-loving kid who’s spent his whole life with a small group of teens and adults in an American colony … on Mars! There are settlements from other countries on the Red Planet, too. But one of the big rules for Bell’s group is that they never make contact with any other colonies. When all of the adults fall sick, however, it’s up to average kid Bell to uncover the truth and hopefully save everyone he loves.

Eleven-year-old Bell has spent his entire life growing up on Mars. That’s right, Mars! Other than being a resident on a planet that’s plagued with freezing cold surface temperatures, deadly radiation and incredibly destructive dust storms, however, he’s a pretty average kid. He loves animals, cats in particular. And he definitely loves cake, though he’s not particular about that at all.

Well, when the various countries on Earth began establishing human settlements at the end of the 21st century, they soon put the Nanny Program into effect. That meant that every new, useful individual who rocketed to Mars would also bring along an orphaned child to become a part of the growing colonies.

However, Bell’s colony isn’t very large at all. It’s just him, four teens and six adults. That’s not all that many people to keep a sprawling underground American base up and running. But they make do. And to help everyone stay safe, Sai, the colony’s commander, established a small list of settlement rules:

Do not go outside without a buddy.
Use the alarm bell in an emergency.
Keep a glow stick in your pocket.
Rovers are off-limits for children.
Do not go beyond the flag.
No contact with foreign countries, ever.

It’s that last rule that really chafes Bell and the other kids on his base. There are a number of other colonies out there, places they would love to see filled with kids and adults whom they’d love to meet. But for some reason, that’s a big no-no. And no one would ever tell them why. After seeing something crash down to the surface near the French colony, Bell and the other kids actually take a joyride in a rover one day to go see it. And boy, do they get in trouble.

When the adults of the American colony all fall ill with a mysterious virus, however, things definitely take a scary turn. The young colony members take over the settlement jobs and care for the older members as best they can. But everything continues to get worse. And help from Earth is millions of miles and months of rocket travel away. It all seems to come down to Bell—a regular 11-year-old caught up in a not-so-regular Red Planet conundrum—to uncover the truth and somehow save the people he loves.

We see no indications of spirituality or belief in God among any of the Mars colony members we meet.

When something hurtles out of space and crashes to the planet’s surface, Bell sees it and thinks it’s an alien spacecraft. He sees other clues which might suggest that’s true.

None of the various American colonists are related to Bell or the other teens, since the kids were all orphan babies or children. But the groups all work together in something of a broad family structure. Bell and the teens react to and care for each other much like siblings. And the adults all take a loving, earnest hand in raising the kids—teaching them about colony life such as farming work and colony care and taking time to embrace them and see them through difficulties. We later see a similar family structure in other colonies, too.

Commander Sai is the only person who attempts to stick to a more military focus and command structure. That makes him the most standoffish of the adults, someone who sometimes makes seemingly irrational decisions. But we later see emotionally connected reasons for some of his orders, and in the end, he opens up about his feelings and worries—apologizing to those whom he realizes he’s wronged.

The American command back on Earth, however, is authoritarian and distant. There are implied statements about wars breaking out on Earth. And in that way, the story makes subtle negative statements about the shortsightedness and impersonal nature of government.

Bell has a tendency to growl out “Aw, dust it!” whenever he feels frustrated or angry.

There’s no real violence perpetrated on anyone here. But there is a mysterious virus that breaks out in the colony which only effects the adults. It torments them with fevers and racking coughs. One character dies from what may have been the virus or a heart attack.

There are also some perilous moments when the colony’s children are in danger. They crash a vehicle on the surface. One of the kids fractures his clavicle. And the others worry that they’ll be stranded with no help. A similar situation happens when an underground train’s batteries die, leaving someone alone in a long lightless tunnel in fear of losing his life and causing the death of someone he left behind. We also hear about a young woman who was left on the Mars surface with a broken leg and subsequently died from internal bleeding.

There is one married couple in the American colony. We see them talking affectionately with each other and giving each other brief, loving snuggles and kisses. One of the male teens also falls for a girl in another colony. They kiss, much to the blanching chagrin of Bell and another young friend. Lastly, two adults who had once been in love but at odds for a while, meet again, make up and kiss.

Have you ever been afraid and worried about what to do? How did you handle it? As Christians, what do you think God gives us to help us in those moments? What do you think Bell learned from his scary experiences?

In a way, all of the kids in Bell’s colony were adopted. What do you think this story says about adoption? Do you know any kids who were adopted by their family? Does this story make you feel any differently about them, or help you to understand life from their point of view?

This book also talks a lot about reaching out to others and forming friendships with people you don’t know. Do you think that’s important? Did this story make you think differently about people from different countries? What did you learn?

When you have a grumpy or sad day, or when you feel upset about changes that happen, do you ever talk to anybody about it? Are some people easier to talk to than others? Why? Do you think talking helps? What do you think this book is saying about breaking rules?

Even though this novel was written before the coronavirus breakout, young readers could easily see parallels between the Mars story and the disease and its isolating impact in 2020—giving parents a chance to talk through their feelings about the virus. In that light, this novel also deals with issues of loss and grief, even offering suggestions on how to deal with those feelings.

On a more upbeat note, Lion of Mars talks about the great value of community and family and illustrates that we humans are created for, and desire connection with, others. Lastly, this book asks kids to look at the idea of bravery and what that means. For instance, after facing a perilous event, young Bell talks with one of the adults about his feelings in the moment:

“Bell,” Sai said, “Trey told me what happened on the train. It was very, very brave of you to walk through the tunnel by yourself to get help.”

But he was wrong. I hadn’t been brave.

“I almost gave up. I was scared the whole time,” I confessed.

His eyes met mine and he nodded.