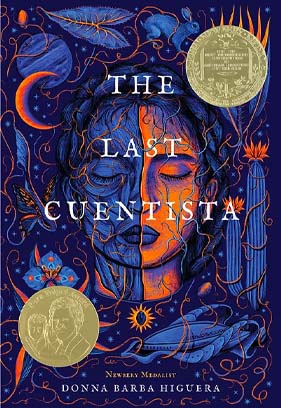 Young Petra Peña, her brother and her brilliant scientist ride a rocket ship into space when Halley’s Comet crashes toward Earth. But after a 380-year journey, what will become of all the stories Petra loves?

It’s 2061 and the world is ending. A sun flare has pushed Halley’s Comet out of its orbit, and that ball of fire is hurtling toward the Earth.

That’s scientific fact, as cold as space itself. And Petra Peña might’ve been petrified by fear had not her grandmother, whom the 12-year-old calls Lita, wove the idea into a Mexican folktale for her. She caressed the beloved girl’s head and purred out the story as only Lita could. For in Petra’s mind, Lita is the greatest of great cuentistas, or storytellers.

Petra longs to grow up and be like her one day. There is nothing like a cuento to calm her or help her hope for a better future. Why, Lita’s story of a great fire snake crashing back home to its mother Earth almost made the idea of leaving Earth for a new tomorrow sound rich with potential.

But to Petra, that rocket flight to a new world wasn’t a good thing at all. When Petra, her brother and Petra’s super-smart scientist parents flew off, Lita would be left behind. There’s only so much room on that ship, after all.

Their family, and only a few hundred others, would be the hope for humanity’s tomorrow. It would take 380 years to get there—with Petra and others locked in hypersleep while multiple generations of caretakers, or “Monitors,” watched over them.

As Petra laid back in her stasis pod, not only did she grieve for her grandmother but, in a way, she grieved for the stories. Would they be lost to all those years of interstellar travel? What would Petra remember? What would the future hold?

When Petra wakes nearly 400 years later, she finds that the future is plagued by something totally unexpected. The Monitors have become the “Collective,” a utopian society that has moved to eradicate all differences and conflict by making everyone equally featureless, dreamless and empty. In fact, they’ve completely eliminated some people that might have been problems, Petra’s parents among them.

And for those they kept—the young who could be more easily molded—they set about eradicating even the past, by erasing all of the sleeping traveler’s memories. Well, almost everyone’s. Thanks to a malfunction, Petra’s memory remains intact.

Now she is the only person who can save people from the Collective. And all she has is her cuentos. How will she capture the spirit and power of the tales and secretly lead her new brainwashed friends back to the truth of who they once were and what they can be once again?

Truly, hope for humanity’s future will all come down to a young girl named Petra: the last cuentista.

It’s suggested that Lita was a woman of faith. Petra even thinks that Lita would have wanted her to pray when she meets great trials, but Petra can’t bring herself to pray to God. “I have nothing to say to Her right now,” the girl notes.

Petra finds some rosary beads—a treasured item her father made from discovered stones. She rubs the smooth stones and wonders if, “Jesus’ power works here on the other side of the universe.”

Petra makes note of a creature called a Jesus-lizard.

Petra does, however, imagine her grandmother saying: “Oh, mija! I have waited so long to hear your sweet voice. I am with your ancestors.”

Petra’s parents are kind and loving. And it’s stated that Petra’s grandmother has spent as much time as possible with the girl, raising her on her family’s stories and folktale stories shaped to convey wise lessons.

When they are all gone, however, the main source of authority is a narrow-minded Collective leader named Nyla. The Collective wants total control—genetically relegating everyone in their group to the same translucent-skinned appearance and a neutered lack of individuality. Nyla is the embodiment of that determination to control completely. (We do see a few cracks in that totalitarian veneer, however, in relation to a young Collective member who she treats almost like a son.)

With that as the guiding force, Petra must take on a more parental role. She guides young memory-wiped and reprogrammed children all close to her age. Petra slowly gives them a sense of their past and tries to nudge memories of that past to the fore.

Petra finds a secret vault on the ship that holds the mementos and keepsakes of the families that had been put in hibernation. “The things represent what we loved most: our home, our friends, our families,” Petra states.

Petra imagines her aunt and Lita—both left behind—sitting together and drinking warm cups of spiked coffee as they look toward the skies. The members of the Collective drink “tonics” of various colors. One or more of them appear to have alcoholic or numbing properties.

The Collective is not above murder at any point if it serves the purpose of the Collective’s societal goals. This is quite evident when Petra discovers the purged pods of hundreds of people—including her parents. This knowledge also raises a constant threat of peril and harm as Petra secretly works against the Collective’s wishes.

There are also some incredibly toxic plants on the surface of a new habitable planet the space travelers reach. Nyla demands that they be made into a deadly aerosol. Nyla later bombs an area with the deadly stuff (we don’t see any of those potentially killed.)

One member of the Collective explores the planet and is infected with something that causes his skin to blister and be covered in painful boils. Petra does all she can to help him, but he later dies.

As the ships are first leaving Earth, protestors attack and one of the three crafts is destroyed, killing hundreds of people.

Petra spots a photo of one of her friends with her two moms.

Do you have a family member who tells stories of the past or tales of the future? What do you think about that form of remembering or reimagining? Are stories important?

Did you know that Jesus often told people stories to help illustrate a point He wanted to make? Take a look at Matthew 13:1-58 for an example. Why do you think He did that rather than just telling people what God wanted?

What kinds of stories does your family tell? What stories do you like best?

What was your favorite part of this tale?

The Last Cuentista may surprise some with the fact that it is primarily a science fiction story about interstellar travel and humanistic maleficence. That said, this adventure, full of twists and turns, definitely points to the idea that family, remembrance and story are all valuable parts of a happy life.