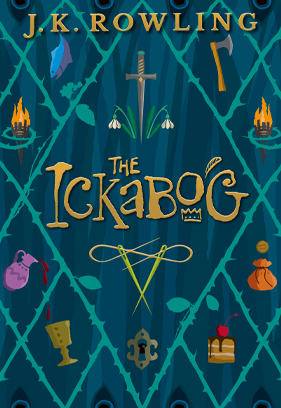 The Ickabog is a monstery boogeyman beast said to live in the northern marshes of the ever-prosperous kingdom of Cornucopia. Few really believe it’s real, but it’s often used to get children to brush their teeth and do their chores. One day, though, some in the King’s court make claim that the beast exists and is terrorizing and killing the poor. Best friends Bert and Daisy must embark on a quest to find out where the real monsters truly live.

Once upon a time there was a kingdom called Cornucopia. At first glance, you’d probably say this tiny realm was blessed. It’s a pleasant land ruled by a vain but generally harmless monarch named King Fred the Fearless. (He dubbed himself Fearless “because it sounded nice with ‘Fred,’ but also because he’d once managed to catch and kill a wasp all by himself, if you didn’t count five footmen and the boot boy.”)

All of the kingdom’s domains tend to be lush and green; cities and towns are places where nobody is ever hungry or poor. Each city, as a matter of fact, is known for its own brand of charm as well as a specific line of culinary delights.

Chouxville, for instance, sports the most delicious mouth-watering pastries. The twin cities of Kurdsburg and Baronstown are known far and wide for their incredible cheeses and fine smoked meats, respectively. And to wash all of those delicacies down, the city of Jeroboam creates the finest wines ever tasted.

In truth, it’s only when you get up to the marshy areas in the far north of the kingdom that you run into any barren fields, scrub grass or people of less-than-cheery dispositions. It’s been said that “the only memorable thing that had ever come out of the Marshlands was the legend of the Ickabog.”

Now, not many people have ever said they believe in this boogeyman-like creature. Its story is used mainly to prompt children to brush their teeth or do homework. And if you ask 20 people about the Ickabog, you’ll likely get twenty different stories about what it looks like or what it can do. That beast has been said to eat children and sheep; it’s sometimes as huge as an elephant and other times spews fire like a dragon. Some say the Ickabog spits poison or heals itself magically. The colorful tales are both broad and deep. But they all seem designed to make you afraid.

That’s not to say, however, that there aren’t more frightening monsters out there than an Ickabog.

In Cornucopia’s case, those fearful and terrible things rise up because of a series of unfortunate events with snowballing consequences. Out of those regrettable happenings, foolish, vain choices are made, someone is killed, and then two diabolical men in King Fred’s court weave a plot to cover up their wrongdoings.

And before you can say “a lie spreads faster than the truth,” both a weak-minded king and his entire populace are quaking in fear that, yes, the Ickabog is not only real, but it has acquired a taste for human flesh. And it wants more. Those fiendish courtiers, the lean and cunning Lord Spittleworth and the corpulent and bootlicking Lord Flapoon, are quickly surprised at the power a little fear and a lot of foolishness can create.

As more people are killed, kidnaped, imprisoned and blackmailed, and as families are torn asunder, all in an effort to keep a truth from rearing its head, evil grows stronger and the kingdom begins to crumble.

It’s up to two childhood friends—who are now as good as orphans—to find a way to reveal the truth. It’s up to them to point out a real monster or two … and to find the real Ickabog!

Several funerals and a wedding are held at a local churchyard. But no further mentions of religion are made.

There’s a general faith in King Fred and his concern and care for the kingdom. And it takes a lot for the Cornucopians to lose that belief.

Lords Spittleworth and Flapoon carry a lot of authority, simply because they have the King’s ear. (Though they both are quick to praise the king to his face while calling him a fool to his back.) But with time, and in the face of King Fred’s growing fear, they take more and more power—even raising taxes, killing some people and installing their own agents to keep the king isolated and the kingdom quivering in terror.

And as the lords’ power grows, their deeds become more and more corrupt. The Ickabog uses these men’s actions to help illustrate for young readers the idea that greed and power are a dangerous and potentially even deadly combination that can swell and corrupt even the fairest of lands or the most stable of governments. People are taxed beyond their means, businesses are ruined and families are left to starve.

The young friends, Bert Beamish and Daisy Dovetail, both come from loving families. But when Bert’s father and Daisy’s mother both die—from convoluted incidents that aren’t truthfully reported—it’s difficult for their families to carry on. And the family friendships suffer, too. The two remaining parents work hard to be as loving and consistent as possible. But when both of them are eventually swept up in the kingdom’s web of corruption, too, the kids become, in essence, orphans who must fend for themselves and try to stay alive.  They eventually begin working to find the truth together.

Other adults in this tale tend to be rather self-serving. Ma Grunter, for instance, runs a crumbling orphanage for lost children and gains what money she has in the form of support from the kingdom. She begins to profit as the kingdom declines and families begin to starve. And she beats and controls her weak young charges with an iron fist. We hear of a small graveyard behind the orphanage growing fuller and fuller as the years pass.

The only authority figures in the kingdom who don’t immediately kowtow to lords Spittleworth and Flapoon are a Lieutenant Goodfellow and a lady of the court named Eslanda. But they, and anyone else who would follow them, are quickly snatched up and thrown in prison. They are both offered leniency if they would acquiesce to the power over them—and in Lady Eslanda’s case, marry Spittleworth—but both refuse the demands and hold out faith that the truth would eventually see the light.

As for King Fred, he is far too fearful and focused on his own vanity to be of any use to anyone and eventually loses his own kingdom.

Goodfellow stands strong and cries out “I’m d–ned if there’s an Ickabog, and I won’t be party to a lie.” The worst of any other language is limited to names people are called such as “blasted nincompoop,” “blithering buffoon” and “mouse-brained moron!” Lies, however, flow freely throughout the story. People drink wine and overeat.

For a fable designed for kids, this story can also be pretty dark at times. Bert’s and Daisy’s parents die. The king’s chief adviser is stabbed and killed as part of a power coup thrown into action by Spittleworth, Flapoon and a major in the king’s army. And numerous citizens that disagree with the dastardly lords are either kidnapped and locked up or murdered and buried in the woods in fake Ickabog attacks. People nearly starve and go mad in the castle dungeons. And several other people and creatures die in the course of this story’s resolution.

We find out that Lady Eslanda always admired the handsome and brave Lieutenant Goodfellow from afar. Eventually, after they both find their way out of captivity, the two speak of their feelings, fall in love and marry.

The most frightening monsters in this story are actually human. What did you think of Spittleworth and Flapoon’s actions in this tale? Do you think things like that can happen in the real world? What should people do if these kinds of corrupt and hurtful things happen? How can you hold bad people accountable? What does the Bible say about it?

What do you think this story said about bullying and friendship? What was your favorite part of the book?

The Ickabog is designed as a children’s fable, a bedtime story of sorts, that tells of a distant kingdom that’s made subject to one of mankind’s worst vices: political greed and malfeasance. In that sense, author J.K. Rowling lends lots of fairy tale panache to the telling, and the book holds real-world applicable lessons of right and wrong that children can glean. But parents should also note that lying, deception, murder, and the purposeful kidnapping and imprisonment of beloved family members are all in the mix of this rather dark and relatively slow-moving tale. (Scary monsters, other than the human kind, are not really a part of the equation.)