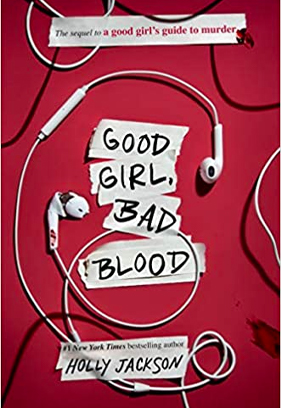 Pippa Fitz-Amobi has decided to stop being a teen detective. Her first successful “case” was emotionally exhausting. She’s done with the stress and strange looks she gets from being that girl. But then Jamie Reynolds, brother of Pip’s good friend, Connor, goes missing. And the police refuse to do anything. Uggh! Looks like it’s up to Pip to dredge up more dark secrets in the small town of Fairview.

Pip is done with being a detective.

She sorta stumbled into being one, via a school project, but it wasn’t an easy experience. Sure, piecing together clues and solving an old murder that took place years before in her little town of Fairview was exciting, scary and ultimately rewarding. It even earned Pip a bit of national attention when the news broke and her podcast about the case went viral. But the whole process was emotionally draining. It consumed her.

At this point, Pip feels exhausted in ways that you can’t just sleep away. And she simply wants to go back to living a normal teen life: you know, go to school, plan for the future, and maybe have a little time to cuddle with her “sorta” new boyfriend Ravi (brother of Sal, one of the murder victims in the first case).

But sometimes success has a way of haunting you.

As soon as Pip publicly announces that she’s wrapping up her podcast and tossing aside her detecting ways, her best friend Connor begs her to help with another problem. Connor’s brother Jamie has gone missing. The police refuse to get involved because Jamie’s an adult, at 24. But there are suspicious circumstances in the mix: Jamie’s suddenly odd behaviors and bouts of depression; his strange internet searches; a mysterious online beauty; missing money.

With even the slightest scratch of the surface, Pip can see that too many things in this situation don’t add up. And as the hours tick by, it does appear that Jamie’s life may be in danger. Can Pip just stand by, or should she scratch a little deeper?

Pip may not feel like the “teen queen of true crime,” as she’s been dubbed by an online site. But when somebody’s life is on the line, she can’t just be an average teen either. There are still dark secrets in the little town of Fairview. And Pip, the detective, has her special ways of digging them up.

Pip isn’t a person of faith and she generally shrugs off any religious ideas. In fact, the only nod in that direction here is when a funeral takes place at a local church and some people protest the proceedings from across the street because of the deceased person’s loose relationship to past crimes. (It’s not stated that the protestors are religious, but one of the protestor’s placards reads “Burn in Hell!”)

Pip’s parents are concerned when she gets involved in another “case.” They correct her when they think she’s straying out of line or overextending herself, but they’re always encouraging her to learn, grow and reach for more. Jamie’s mom is also trying to do everything she can to get people to find and help her missing son. Jamie’s father is more detached, but we learn that there had been strains in that relationship that both he and Jamie contributed to.

As the story unfolds, the harmful impact social media can have in people’s lives is repeatedly illustrated. Several young men are impacted negatively by the “charms” of a catfishing individual. People are influenced by fake online images and statements. And social media stirs up major conflicts and emotional reactions that eventually lead to people being injured, kidnapped and killed. (The book doesn’t state that social media is all bad—in fact, it’s used to help solve a crime—but it does suggest that the internet and social media can be used in negative and sometimes evil ways, depending on the people using it.)

Pip makes some angry destructive choices of her own at one point when she finds out about a miscue of justice in the courts. (She’s never held accountable.)

Profanity feels a bit more pumped up here as compared to the first book in the series (A Good Girl’s Guide to Murder). There are multiple f- and s-words in the dialogue and a smattering of words such as “b–ch” and “d–n.” God’s name is misused. Underage teens and young adults drink beer and play drinking games at parties and the like. We hear of teens getting “super drunk.” We don’t see drug use, but one character Pip interviews is clearly understood to be a drug dealer. And we hear—in connection with a rapist’s trial—about people being drugged against their will and physically abused.

A threat of violence (from several different characters) hangs over Pip’s case, and a ticking-clock-suggestion that Jamie could statistically end up dead if Pip can’t put clues together quickly. We hear of a past criminal case involving a murderer who kidnapped and killed young children. This killer also forced his own young son to help in the kidnappings.

Someone is shot repeatedly and left to die in a burning building. And a traumatized Pip gives her all in a struggle to save/resuscitate the victim, with “blood overflowing the wounds,” during a long wait for medical assistance It’s an intense scene that definitely scars the teen protagonist. The author uses that scene and other situations to illustrate the wide-reaching impact that evil actions and choices can have.

Pip and her boyfriend Ravi hold hands and kiss. They verbally express their love. Another twentysomething woman that Pip knows is involved with her drug-dealer boyfriend, and it’s implied that they are sexually active. A catfisher uses the doctored pictures of a beautiful local teen girl to draw young men in for an implied intimate relationship.

What do you think this story is saying about social media and the internet? Are the choices teens make in this story similar to some you’ve seen in your school or among your friends? What good or bad impact do you think they have? Does this story inspire you to become more or less active online?

Pip was obviously wounded by things that happened in this story. If you were similarly impacted, what could you do to start a healing process? What is this book saying about friendship and family?

As with the first book in author Holly Jackson’s series, this is a well-written tale about a bright teen girl who uses her wits and intelligence to solve a mystery. It’s a highly anticipated sequel. However, the story is also marred by sometimes bloody and troubling content, as well as some harsh profanity. Parents of teen readers, and teens themselves, should take that into consideration before entering in.