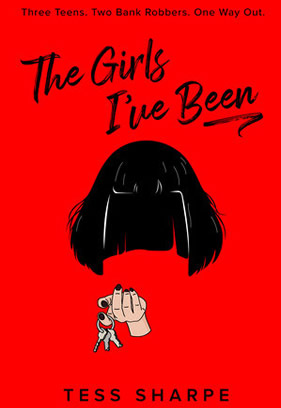 Nora O’Malley has been a lot of different girls. Her con-artist mother made sure of that, raising her as a conning protégé since she was little. But for five years, now, Nora’s been away from her mom and playing at just being normal. When she walks into a local bank, however, and suddenly becomes one of several hostages in a bank robbery, she has to quickly dust off a certain set of skills.

At first glance you wouldn’t notice anything different or strange about Nora O’Malley. She looks like any other average, pretty teen. But the truth is, Nora is anything but average. In fact, she’s not even Nora O’Malley. That’s just a made-up name, the most recent of many.

You see, Nora is actually playing at being normal. It’s not her fault that it’s an act, it’s just the way she’s been programmed. For as long as she can remember, Nora has constantly been shifting through different personalities, looks and names. There was Rebecca, Samantha, Haley, Katie, Ashley, the list goes on. They’re all girls that her con-artist mother trained her to be, based on whatever potential husband or boyfriend she wanted to target. It was all a mother/daughter facade designed to fit the current con.

For the last five years, however, the girl now named Nora has been away from all that. Thanks to her older sister—who was once being groomed as a conning protégé, just like she was—Nora was able to get away from the horrible mother who shaped and reshaped her life. It hasn’t been easy, but Nora O’Malley is starting to learn to be something other than a fake girl.

But this morning, something happened that threatens to upend everything. She walked into a local bank with her ex-boyfriend, Wes, and current girlfriend, Iris, and the three of them were suddenly swept up in a bank robbery.

Nora’s mind quickly ticks off the details as she’s laying on the floor with the other bank customers, the youngest robber waving a shotgun around over their heads. Red Cap, the younger of the two takes the orders while Grey Cap—the older, rougher man who’s obviously seen jailtime—gives them. But it’s also obvious that things aren’t going as the thieves planned. And this will soon become a hostage situation.

Most people wouldn’t see all that while face down on the carpet but Nora instantly sizes up the details of the situation: just the way she’s been trained to do. In fact, as tempers flare, she also knows that someone will likely be shot very soon. And the fact that the robbers aren’t wearing masks would suggest that they all will be gunned down at some point.

In truth, the only way out that these hostages may have at all is lying right there with them on the floor of the bank. It’s a girl named Nora … who isn’t Nora … at all.

In the midst of the bank robbery, Nora flashes back to events in her life that shaped who she currently is and what she’s learned. One of the cons she and her mother pull is on the pastor of a “prosperity Christianity” church. Nora defines that form of Christianity as “the perfect con.” In fact, she goes on to say that all religion is a con and that Christian women are looked upon and treated as “lesser,” disposable people.

Nora states that the only thing her mother had faith in was her ability to outmaneuver and out-con the people, especially the men, around her.

The main adult in Nora’s life was her mother, a selfish, greedy and generally awful person when you look at what she did to her daughters. However, most of the men in Nora’s life were even worse. One of her various stepfathers was a pedophile, another abusively violent and all of them generally nasty men. (Were told, though, that their very natures made these men more susceptible to an unexpected con.)

Ex-boyfriend Wes’s father is also very physically abusive to his son. And girlfriend Iris’ father is emotionally abusive to her, too, prompting to wonder, “Is every dad just evil?” There are other examples of leading men in the town either having affairs or being underhanded and breaking the law. (In fact, the book promotes a general theme that most men are both potentially threatening and untrustworthy.)

Considering that this is a Young Adult title, The Girls I’ve Been is profusely profane. F- and s-words, along with a variety of other coarse words, abound.

As already mentioned, many of Nora’s past fathers are both emotionally and physically abusive to her when she was a little girl. She’s slapped, punched in the stomach and touched in inappropriate ways by these men. And Nora’s mother generally lets it proceed, telling her daughter to deal with it for the sake of the con. Nora’s pinched and hit by a new stepbrother after her mother marries the boy’s father. And she’s punched in the face by a boy as well. We hear of Wes’ father carving his son’s back with a knife; those wounds took a long time to heal, because the man wouldn’t take the teen to the hospital. Nora’s mother is also beaten by abusive men.

Nora eventually fights back, punching a boy and splitting his lip; later, she also shoots a man in the leg. In the course of the robbery, a man is shot in the side. Another man his hit with a makeshift fire bomb that rips open his chest and abdomen. A man is stabbed in the side with a pair of scissors. And someone has a burning woman’s slip wrapped around his face. A fire is set in the bank building and flash-burns through a bathroom and a hallway.

Men drink alcohol. And a teen accidentally eats a fistful of marijuana cookies and gets mind-numbingly stoned.

Teen Nora is bisexual. And though we only “see” her and Iris kissing and caressing each other, it’s made clear that she’s had sex with both Iris and Wes in the past. Iris talks about having an abortion after getting pregnant with a boyfriend in her past. (A boyfriend who was, again, an abusive guy.) An adult man makes sexual advances on a young girl. One of the robbers threatens to rape Nora.

None. Get free discussion questions for other books at FocusOnTheFamily.com/discuss-books.

The Girls I’ve Been has gained quite a bit of attention and will gain even more once it’s made into a Netflix original movie. And quite frankly, the premise of the story is pretty intriguing. What author Tess Sharpe does with that premise, however, is another thing entirely.

This book is foul and raw at times. And the abuse of a young child in the process is disturbing. Parents should also note that the author weaves in problematic elements here that don’t actually move the story forward, but seem to be in place solely for the purpose of making social commentary on gender, sexuality and religion.