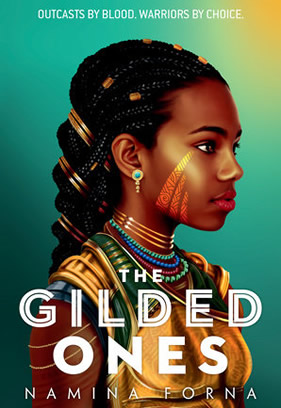 Sixteen-year-old Deka lives in a large kingdom where woman are second-class citizens, and their worth is tied to the red purity of their blood. But when cut, Deka bleeds gold, the color of a demon, and is sentenced to death. She’s saved by a mysterious woman who offers her the chance to discover her hidden gifts and be part of a female warrior group that will fight off a great coming danger.

Being 16 and a female in the deeply patriarchal, ancient kingdom of Otera is different than being a young woman in many other lands. In Otera, a young woman’s value is based on her purity and her ability to marry and raise a good family, making her village stronger and healthier.

That purity isn’t measured so much by a woman’s actions, however, as it is by the color of her blood. Every year there comes a time for the blood ceremony—a day when all maturing teen girls must step up, by decree of the holy book of Infinite Wisdoms, and be cut by a village priest.

Sixteen-year-old Deka has been anticipating and kind of dreading that day for a long time now. She really wants to be able to officially become a member of the village, but she has her worries. She’s already been given distrusting glances by some in her Northern village because of her dark skin color. Her deceased mother was from the dark-skinned South, which means Deka stands out among the blonde-haired, pink-skinned girls in this wintery town.

All Deka can do is pray that there won’t be other differences about her that cause problems during the village-wide ceremony.

But on the day of the ceremony … her blood runs gold. That’s not only a color of impurity, it’s what the holy book says is the mark of a demon! Which strikes Deka as impossible. How could she be that evil? What did she ever do to earn this from Oyomo on high? But there’s one thing the anguished teen is sure of: Because of this curse she will face a terrible, bloody consequence worse than death.

And she does. At her own father’s hand.

Though the torture she endures would surely kill any other woman, or man, Deka survives. Her torn flesh miraculously stiches itself back together over and over. Is this yet another torment sent upon her from the heavens?

Then a mysterious woman arrives from the Empire’s capital. And she offers the now nearly crazed Deka a choice: stay in the village and continue to submit to her fate or leave to fight against a great coming evil in an army of girls just like her.

The fact that there are female warriors is already a shocking revelation for the beleaguered Deka. But the notion that these women—near-immortals called alaki—are all like her, rattles her to her core. Deka decides that if that is how Oyomo wants her to serve, if that is what all this horror she’s endured has been for, then she will follow that path. She will leave the only life she’s ever known and learn how to use whatever powers she possesses for the good of all.

But Deka will soon learn that everything and everyone she’s ever held to be true—every anchor she’s clung to, every fact she’s been sure of—is something altogether different.

There’s no direct reference to Christian theology or teaching here. But …

… readers might recognize parallels between the religion people use in Otera and a rudimentary understanding of monotheistic faiths such as Christianity, Judaism or Islam. This story’s believers look to and lift up prayers to an “Infinite Father” called Oyomo, for example. And some pious characters quote short, scripture-like passages at times from the book of Infinite Wisdoms.

Eventually, though, we learn that the whole belief system is a lie. The Emperor and the kingdom leaders have long used that religion as a way to control the people and deal with women (in horribly deadly ways) who have gold blood like Deka. It’s only recently, however, that the Emperor is swayed to use their religious order as a way to collect those women for a darker purpose. Readers could interpret the author’s use of religion in this way as an allegorical means of commenting critically on broadly similar monotheistic expressions of faith in our world.

But we’re not done talking about faith and religion yet. There’s also a polytheistic religion and faith at the heart of this tale. Four ancient goddesses, worshiped by many, drive everything forward. They inexplicably embody the magic necessary for the immortal-like powers, super-strength, sensory enhancements and transforming rebirth abilities of some characters.

Some people in this tale die in terrible ways (beheading and dismemberment) and their body parts magically reconstitute over time. In other cases, people die and are then reborn in a completely different form. With regard to the latter, readers might be reminded of real-world polytheistic faiths, such as Hinduism, that teach reincarnation.

Otera is a strict, patriarchal society. And while the story follows Deka as she transitions from a shy, wounded child to a strong, powerful woman, it’s also a story of oppression and exploitation. The book uses its fantasy context to talk about the ways men and governments can exploit women, particularly when in a tyrannical system. The male leaders here strip personal autonomy—and even a sense of purpose and self-worth—from the women in the story. Deka and others have to endure that degrading treatment, slowly growing stronger and learning how to stand on their own to push back in ethical and physical ways.

In that sense then, there are few male figures worth admiring here. The emperor and other male kingdom officials are deceptive, manipulative and foul. Male religious figures fare no better. In fact, Deka’s own father steps up to viciously end her life based on demands from religious figures (similar to so-called “honor killings” in some Muslim countries). That said, a few younger men do prove themselves to be honorable and just in the end.

Even the women in power—such as Deka’s mentor, White Gloves—have a tendency to be untrustworthy and harsh at many times in the course of the tale. (And it could be interpreted that these women are reinforcing their own oppression.) In fact, White Gloves actually drives Deka and the alikai to commit atrocities at the Empires behest. Deka constantly has to watch her back and tread lightly through lies wherever she goes until she’s able to win the trust, and then love, of a few stalwart alaki friends.

There are one or two uses each of “b–tard” and “b–ches” and a single use each of “arsehole” and “feking.”

We see some racial discrimination in the mix here, in the sense that the kingdom is divided into East, West, North and South segments that contain groups of various skin colors. “A mask will never be able to hide that ugly Southern skin of yours,” a nasty teen says to the dark-skinned Deka, for instance. But that never becomes a prominent part of the story conflict. By the time Deka arrives at her alaki training center, the population is diverse; there’s a character named Li from the East, Northerners have pink skin and blond hair, etc.

Violence, however, is very much a part of things here. There are large monster-like creatures that Deka and her fellow alaki battle. Accordingly, we read of bloody battles, fiery explosions and the wounds and scars that the alaki endure. A young woman is slashed with sharp talons and has her spine ripped out of her body, for instance. In another example, someone is left to bleed out over the course of days, her regenerating blood eventually covering a cellar floor. And a particularly difficult scene depicts Deka’s own father beheading her with a large sharp sword. In fact, Deka is dismembered at one point and her severed parts are gathered together—she wakes from her death and talks with someone as her goopy pieces reattach.

That said, much of the truly gory stuff is simply spoken of and kept outside of our “view.” For example, we’re told that Deka, in the months after being found to have gold blood, went through beheadings, drownings, hangings, a poisoning, a stoning, disembowlment, bloodletting and dismemberment as the religious leaders continued trying to kill her.

We also hear of the emotional scars that these tortures left on Deka and her female friends. One woman tearfully tells of being caged under water and drowning over and over. “The physical body—it heals. The scars fade. But the memories are forever. Even when you forget, they remain inside, taunting you, resurfacing when you least expect,” someone says.

Because of the male dominated society, even the female warriors have to have a male counterpart when heading into battle. So, the female alaki are all teamed up with male partners. In Deka’s case that turns out to be a very good thing, for she meets and eventually falls in love with a young soldier who turns out to be someone of worth and understanding. They start out with small touches of affection. That leads to holding hands and then a kiss.

We hear of two alaki women who have begun being intimate with each other. There’s a brief discussion of women and their “delicate bits.”

This is a popular YA book with some interesting allegorical thoughts about the struggle of women couched in an enjoyable fantasy tale. (There are reports that a movie version is already in the works.) But potential readers should note that with the right tilt of the head, this book casts faith in a very negative light. And for all of the female empowerment in this magical mix there is also a lot of bloody violence against many of the female characters, almost to the point of seeming gratuitous.