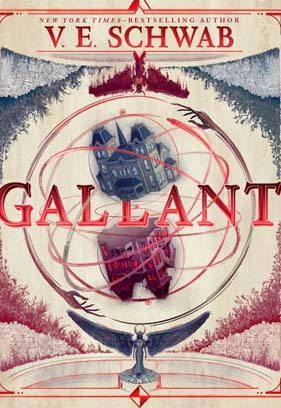 Olivia Prior has no family and no voice. All she has is her mom’s journal, filled with ramblings from a woman going mad. But it holds the key to Olivia’s dark past and darker future. It leads her to Gallant. And that sprawling manor is the gateway between a world of shadow and the world of light.

Olivia sees ghouls—the decayed spirits of the dead that lounge around with missing jaw bones and other bits. She sees them in their partially-here state as they gaze soundlessly at the living world around them. In fact, these gray tattered spirits are as furtive and soundless as Olivia often is.

Olivia Prior is an orphan as well as a mute. And those parts of her make her an object of scorn and bullying at the Merilance School for Independent Girls. But those challenges have also, in their own odd way, made Olivia stronger and more observant. She stands strong against those who would hurt her. She practices looking at and drawing the world around her. And she’s learning sign language, even though no one else in the school can understand it.

Other than that, Olivia tends to focus a lot of her attention on her mother’s journal—the one small, green felt-covered thing that connects her to some semblance of a family: a most important missing part. She knows nothing about her mother, other than what’s found in those pages. Not even her name.

That odd little journal is full of inkblot illustrations and the rambling words and reminisces of a woman who was very obviously losing her grip on sanity. Olivia has memorized every aspect of the journal, from the exact shade of green on the cover to the elegant G scripted on its front. She’s spent years guessing at what that initial stands for: Georgina, Genevieve, Gabrielle?

Olivia studies this enigma of a book in hopes of piecing together something about her mother, about her father, and about why she has ended up in this gray and dismal place.

One entry in the journal, however, rings clear to Olivia. They are words that she’s sure her mother intended for her, for the page starts with, “Olivia, Olivia, Olivia,” written in a shaky scrawl. “Remember this—the shadows are not real,” her mother wrote.

Does that mean that Olivia’s mother saw the same spectral beings that she does? For it’s true that though those ghouls linger and watch, but they can’t touch or impact any living thing. And if Olivia looks directly at them, they flutter and fade away.

The entry goes on to say: “The dreams can never hurt you. And you will be safe as long as you stay away from Gallant.” That part is more confusing. For one thing, Olivia never dreams. Her sleep is as empty as the gray skies hanging above Merilance. And what or where is a Gallant? Olivia reads those lines over and over and still never draws any closer to understanding.

Then one day, Olivia is called into the head matron’s office and handed a letter. It is addressed to her, from a relative she never knew existed: her uncle Arthur Prior.

I confess. I do not know exactly where you are.

I have sent these letters to every corner of the country. May this be the one that finds you …

The letter goes on to say that Olivia’s uncle Arthur had long sought after both her and her mother. And it ends with:

You are wanted. You are needed. You belong with us.

Those are words that Olivia never dreamed she would hear or read! There’s only one tiny problem: the address on the back of the envelope. This beautiful, wonderful, and totally unexpected dream of a letter comes from an estate called … Gallant.

Suddenly Olivia is left to decide which message, which part of her life, she will embrace, and which she will push away.

For some parts, whether mismatched or missing, aren’t meant to fit together.

At one point, Olivia admits that she “had never prayed or believed,” but in that particularly scary moment she prays for help. And it’s answered in an unexpected way.

Gallant presents a version of the “afterlife” that has no foundation in Christian belief. The closest comparison would be the book’s idea of an ongoing battle between good versus evil; light versus shadow.

Gallant suggests that there is a dead and grey realm that is the polar opposite (including landscapes and buildings) to the colorful, growing and thriving world that we recognize. And Olivia’s new home, Gallant, is the entry and exit point between those two existences. In fact, there’s a crumbling wall with a door in the garden behind the Gallant estate that is guarded by the Prior family. And that gateway is magically sealed through application of a Prior family member’s blood. If it is opened, then our world would be open to a powerful creature that can suck the very life force out of any plant, animal or person it touches. Olivia sees this creature as the manifestation of Death itself.

This Death being also has the power to reach out across the barrier and manipulate the dreams of Priors on this side of the wall. And it does so repeatedly to influence Olivia and her only living family member: her cousin Matthew.

[Spoiler Warning] When Olivia arrives at Gallant she finds that her uncle has already died, and the only remaining people in the Gallant manor are Matthew and two staff members: Hannah and Edgar. They all fight to maintain the barrier between light and shadow.

As mentioned, Olivia also sees ghouls; gray, ghost-like creatures that pop up around the Gallant estate. Olivia comes to realize that they are the decaying spirits of past Priors that continue to hang on around the estate (including the spirit of her mother). They cannot talk, but they do sometimes guide Olivia in the choices she should make.

Olivia also eventually learns that her father was actually an entity created by the Death creature (created from a bony bit of his body and crumbled ash) to serve as one of his “soldiers.” (We see others created in this fashion.) That’s why our young protagonist inherits the ability to not only see ghouls but command them. When going to the shadow world, Olivia also has the ability to share her lifeforce with deadened things there—bringing plants, small animals and even a soldier creation of Death’s to life.

In general, the matrons at Merilance School for Independent Girls are rather harsh women with few strengths or graces other than the ability to maintain order with a heavy hand. There was one older matron who helped teach Olivia sign language, but she passed away.

Hannah and Edgar, at the Gallant estate, are both kind and hardworking. And they both lend Olivia as much help as they can. Cousin Matthew is a gaunt and tightly strung individual who is sternly against Olivia staying at Gallant. But we learn that it’s more because of the heavy Prior blood burden that he carries and doesn’t want Olivia to be weighted down with, too.

Though Olivia’s mother’s journal seems like the collected ravings of a madwoman, Olivia later comes to understand her mother’s love for her through another found journal and interaction with her ghoul.

There’s also Olivia herself. We see her grow from a young woman who would steal from and hurt anyone who crosses her to becoming a person who would readily put her life on the line to protect others.

There is no profanity in the mix, nor do the characters consume alcohol or drugs.

Violence, however, is another thing. Blood is a key point of how to seal the gateway between light and shadow. So, we see both Olivia and Matthew slashed and bleeding from their palms and body on several occasions. Both Olivia and her cousin are attacked by Death’s soldiers, who slash with various blades. Someone steps up to protect Olivia and receives a deadly stab with the point of a sword that spills his blood and kills him.

Olivia also has dreams of former Prior family members dying and taking their own lives. Death sucks the life force out of vegetation and people.

We learn that Olivia’s mother and Death’s soldier fell in love and ran away from Gallant together. We only catch glimpses of their time together, but it’s implied that Olivia is born out of wedlock. Olivia talks about meeting a young boy at Merilance. They kiss. Olivia talks about wanting to feel the excitement that the other girls at the school had spoken of, but she doesn’t.

Author V.E. Schwab is well known for her bestselling novels and series, and that alone will draw young readers’ attention. And there is assuredly a strong protagonist and an appealing (if creepy) vibe to Gallant’s fantasy/horror world.

But parents of younger readers should note that this is a story of ghouls, haunted houses and mirrored, deadly realities that presents a dark, and at times, nightmarish spiritual world for them to wade through.