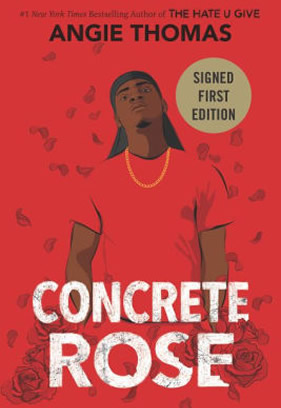 Concrete Rose is the prequel to The Hate You Give, following Maverick Carter’s life as he becomes a teen father. He must decide between staying in the gang his father was a part of or changing everything and getting out for his new son.

You might say that Maverick is like any other teenager whose father is a drug lord. He’s busy playing ball, buying gifts for his girlfriend, getting the newest kicks and helping his mom pay the bills by selling drugs. However, a one-night stand results in a baby who is left on his doorstep. And that … changes everything. Maverick instantly becomes a full-time dad before the first day of his senior year in high school.

The baby, Seven, becomes Maverick’s world. And he determines that he has to be a better father than his own dad, who’s currently in jail. But he misses hanging out with his friends, not to mention sleep, as well as the cash that came from selling drugs. In spite of that, though, with the encouragement of his cousin, Dre, Maverick gets out of the gang and takes on a part-time job with the local grocer.

That doesn’t mean life is easy. Between too little pay, too much back-breaking work and no sleep, he’s constantly falling asleep in class. If he goes to class at all, that is. And when his cousin, Dre, gets shot in the head just outside of his house, Maverick’s world starts caving in. He starts “slinging” drugs again. Soon after, he finds out that his girlfriend, Lisa, is pregnant.

What will he do with two children before graduating high school? Should they consider abortion? Adoption?And what about the need for vengeance that boils within him? Isn’t avenging the closest person he had to a brother the right thing to do?

Maverick’s life is full of questions. And none of them have easy answers.

Maverick’s mom will occasionally complain out loud as if she is talking to God. However, she doesn’t believe church attendance is needed to be close to God. Mr. Wyatt, Maverick’s grocer boss, is an elder at the church. He doesn’t swear, and he shares verses to encourage Maverick. One specific verse is Romans 4:17.

Maverick’s mom is a big part of the story. She pushes him to do better, gets disappointed when he fails and is always there to help him out. She is the epitome of “tough love.” She will not take over the care of baby Seven, but she helps Maverick in many ways to become a good father.

Maverick’s father is in prison. Arrested for dealing drugs as leader of the King Lord gang, he admits to letting his family down. He encourages Maverick to be a man and make his own decisions.

Finally, Mr. Wyatt offers Maverick a legitimate job in his store and garden. He makes Maverick work hard but cares about him and tries to guide Maverick into sound decisions. He also encourages Maverick to grieve the death of his cousin and to go for his GED.

There is a lot of profanity here. About every other page has foul content, including every vulgarity imaginable. And the Lord’s name is regularly in vain. Made-up cuss words and obscene gestures are used as well.

Alcohol is abused by a few, including an entire bottle of wine consumed in one night by his mother. Although Maverick tries not to sell or use drugs for part of this story, there are times when he does both. He gets high and sells to others, who talk about their experiences with drugs. Finally, there is a scene where Maverick goes to find a homeless man and finds him in a filthy crack house.

A few times, gunshots are heard in the neighborhood. And there are references to those who have been shot or beat up badly due to gang wars. Maverick is the first to find his cousin, shot in the head, and holds him until the paramedics arrive.

The book begins with Maverick trying to find out if an illegitimate baby is his child or the child of another man who also had sex with the baby’s mother. The baby does end up being Maverick’s. There is a scene where Lisa and Maverick have sex. While not overly graphic, it does take the reader through the act.

When Lisa finds out she’s pregnant, too, Maverick offers to let her live with him and his mom. She says no, but several other preganant girls in the story live with their boyfriends.

There are enthusiastic comments made about girls’ backsides and the tight clothing they wear.

Finally, Maverick’s mother comes out as gay. She confesses that a close friendship with another woman is really an ongoing lesbian relationship that makes her happy. She’s still married to her husband, who is in jail, but explains that she had told him she was bisexual at the beginning of their relationship.

Get free discussion questions for this book and others at FocusOnTheFamily.com/discuss-books.

Maverick is only 17, but in many ways he’s fully immersed in an adult world here (something parents will definitely want to keep in mind for any teens wading into this story). What choices does he make that force him to deal with adult issues perhaps before he’s ready to do so?

There are three choices when facing an unexpected pregnancy. All of the options were discussed in the book. In the end, Lisa chooses life. What are your thoughts on teen pregnancy? Maverick promised to support Lisa no matter what she decided. Was that helpful or not?

Young readers may well be drawn to this book because it is not only a prequel to the bestselling The Hate You Give, but also directly connected to characters in the movie of the same name. Parents should know that it’s a gritty story about a young man growing up on the city streets. And it’s filled with the street slang and profanity, the sexually permiscuous behavior, and the gang life that is regularly portrayed in that setting.

That said, there’s also joy and deep relationship in this story mix. In fact, the book draws readers in with those intimate character portrayals and it’s mix of good and bad. We see people stumble and fall, but hope they will get back up again.

All in all, Concrete Rose is a hard story, but one that also has redemptive elements.