Jumanji Takes It to the Next Level 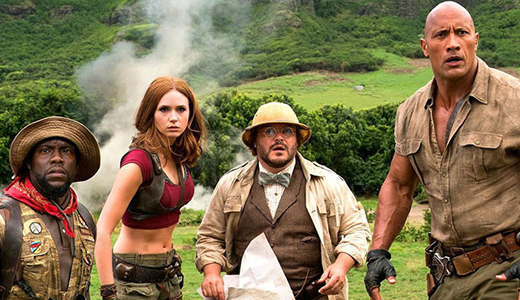 Elsa, that Disney maven of ice and snow, is a pretty powerful princess, to be sure. She and her chilly cohorts spent three whole weeks warding off all cinematic comers. But sometimes even the nicest of ice crystals can get knocked off its perch by a well-placed Rock.

Jumanji: The Next Level ended Frozen II’s reign atop the box office in convincing fashion, roaring to an estimated $60.1 million in North America to finish No. 1. That’s more than twice what the last Jumanji movie made during its weekend debut (Jumanji: Welcome to the Jungle, which, like the latest, starred Dwayne “The Rock” Johnson), and more than five times what the original, Robin Williams-fronted Jumanji earned way back in its opening weekend in 1995.

Frozen II, meanwhile, slid like I do on an icy sidewalk. It didn’t slide very far, mind you—just to No. 2. Elsa, Anna and company collected another $19.2 million, pushing the film’s domestic total to $366.5 million. That lands it at No. 6 for the year, edging past stablemate Aladdin. And if you add in overseas receipts, Frozen II has pushed its worldwide gross to more than $1 billion. Yes, the film’s Olaf-ing all the way to the bank.

The whodunit Knives Out slipped a little itself, down to third place with nearly $9.3 million.

Two newcomers closed out the top five, and both had aspired to be a little higher in the countdown. Richard Jewell, directed by Clint Eastwood, earned just $5 million, according to early estimates, finishing well below studio expectations. The movie, mired in controversy over its depiction of journalist Kathy Scruggs, perhaps proved that there is such a thing as bad publicity. A movie predicated on a real-life bombing seems, ironically, to be a bit of a bomb itself.

Still, it fared better than the horror thriller Black Christmas, a remake of a 1974 film of the same name. The reboot banked just $4.4 million—a dismal opening indeed for the film’s distributor, Blumhouse. The last time a major movie from the studio had done quite this badly, according to Box Office Mojo was 2015’s Jem and the Holograms.

Remember that one? Yeah, I thought not.

Can Jumanji: The Next Level hold on through the next weekend? Anything’s possible, I suppose. But given the approaching (ahem) Force of the Christmas docket, it seems unlikely.