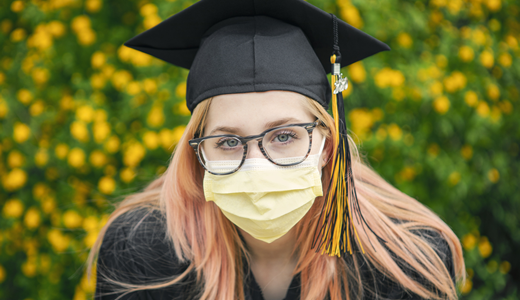 Well, here we are in week…wait, is it week six or seven of quarantine? Honestly, I’ve lost count. Regardless, though the days have started blending together, for many folks, this week of quarantine stands out as preschools, kindergartens, high schools and colleges do their best to celebrate graduation.

A couple of weeks ago, thousands of high school seniors across the country danced the night away at a “virtual prom” hosted by actor John Krasinski on his YouTube channel Some Good News, featuring performances from the Jonas Brothers and Billie Eilish. This week, Krasinski took the opportunity to host a “virtual graduation” to celebrate the achievements of even more young people as they transition from one stage of life into the next.

But rather than give a traditional commencement speech, Krasinski coordinated a “commencement conversation” so that graduates could get advice from some of their heroes—Steven Spielberg, Malala, Oprah Winfrey and Jon Stewart. And while students were grateful for the unique opportunity, MTV News reports that many students feel that an online celebration—be it local or national, no matter how stocked with celebrities it might be—just isn’t the same. “I really wanted to just walk across that stage, because I’m really proud of myself…. I thought it would be really great to celebrate making it to the end. It’s just really disappointing,” Caroline Luce said. Other students have been saddened by the lack of closure after such a formative period in their lives. “There are so many people I didn’t say goodbye to, people I just don’t expect to see again …. There’s so much that I did for the last time without ever realizing it was the last time,” said Nick Robinson of Champlain College.

It’s still months away, but many students will likely find themselves facing similar feelings of “missing out” when school restarts in the fall. According to ABC News, colleges across the country are preparing for many different scenarios such as delaying the start of classes or alternating blocks of students in lecture halls. But the fact of the matter is “all schools are clamoring for something that probably is unknowable, which is, ‘What’s August going to look like?’” says Peter McDonough, vice president and general counsel for American Council on Education.

Despite this feeling of melancholy, many people refuse to give up experiencing milestone moments in their lives. In addition to virtual proms and graduations, some people are hosting their wedding ceremonies via the Internet. After New York governor Andrew Cuomo made it legal for couples in the state to obtain a marriage license and have ceremonies performed remotely, couple Mark Van Name and Jen O’Leary got married in their New York City apartment via Zoom. “The dress code was ‘Zoom formal, pants optional,’” said BuzzFeed News. CNN Business also reported that, after their wedding plans were postponed by stay-at-home orders, New Jersey residents Sharmin Asha and Nazmul Ahmed held a symbolic wedding celebration on Sunday in Nintendo’s new game Animal Crossing: New Horizons.

Supreme Court justices were trying to carry on with “business as usual” as best they could this week, too, with the court hearing its first-ever oral argument by telephone conference call. NBC News reports that the call went smoothly with only a few minor hiccups, such as when Justice Sonia Sotomayor forgot to unmute her phone before speaking. Whether or not our court system will continue to conduct business in this manner when the new term begins on Oct. 5 (keeping in mind that six of the justices are 65 or older and considered to be at higher risk if they contract the coronavirus) remains to be seen.

In the meantime, people around the world continue to find ways to keep themselves (and the public) entertained. CBS News reports that a 91-year-old fashionista from Georgia began trending online after her caretaker posted videos of her trendy outfits on YouTube. According to Fox News, a father in England built his 3-year-old son a retro video game arcade using an old Atari computer, a few arcade buttons and some pieces of wood. Time Magazine encouraged readers to watch an online sheep handling competition (which is apparently a real thing) for children under the age of 8, which, according to farmer and judge of the competition James Rebanks was “the cutest thing.”

Some people, however, aren’t content to watch kids walk sheep. According to CBS News, stunt double and actress Zoë Bell invited dozens of female celebrities and stuntwomen this week to partake in an epic, socially-distanced “fight scene.” After beginning the video saying, “I’m so bored. I just want to play with my friends,” Bell appears to kick the camera, with the shot cutting to reveal Xena, the warrior princess herself—actress Lucy Lawless. “Lawless, not one to back down from a battle, acts shocked at her friend’s behavior before pulling out Xena’s signature weapon, the chakram, and punching the camera,” writes CBS’s Danielle Garand. “Then, what seems like every actress and stunt woman in the industry joins in on the battle.” The video has already garnered more than a million views on YouTube and also features Drew Barrymore, Rosario Dawson, Cameron Diaz, Florence Pugh, Zoe Saldana, Halle Berry, Scarlett Johansson and Margot Robbie.

Finally, while this 5-minute video was simply meant to bring a few laughs, many celebrities are also coordinating to bring aid to those in need during this epidemic. So, on Thursday evening (as reported on this blog), the entire cast of Parks and Recreation reunited for the first time since the show went off-air five years ago to create “A Parks and Recreation Special,” raising money for COVID-19 relief efforts. According to ABC News, the episode “carried a strong message about the importance of staying connected and focusing on one’s mental health during the pandemic.” And considering it also managed to raise $3 million (and counting) for Feeding America, its positive message feels like just the thing we need as we all continue to work together as we figure out how to return to “normal” in the coming months.